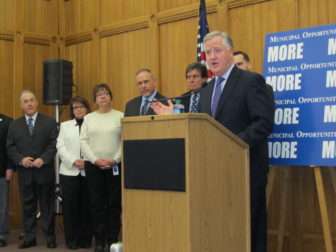 “Lowering costs and regionalizing some functions at the municipal level is the best way to truly reduce the over-reliance by our cities and towns on local property taxes,” said Sharkey, who released the commission’s report in a late-morning press conference at the Capitol.

Much of the report centers on preserving municipal tax bases.

Connecticut long has exempted property owned by private colleges and hospitals from the local property tax. The MORE Commission recommends ending that – but only for new properties.

The state currently reimburses communities for 35 percent of that lost revenue through the so-called PILOT (Payment In Lieu Of Taxes) grant. The commission recommends redesigning the PILOT system to provide a greater share of state funding to those communities with tax-exempt property not currently taken into account in PILOT programs.

Cities and towns also should be allowed to raise revenue, the commission recommended, by adding a surcharge to sporting or entertainment event tickets at local colleges.

The commission seeks to stall the rapidly growing cost of special education by creating regional school districts to help provide the services.

Because parents of children with special needs flock to districts with a reputation for high-quality special education programs, Sharkey said those districts are left paying for the more expensive services for the state’s special education students – a disincentive for districts to provide quality programs.

State funding for special education has not changed in seven years.

Districts are currently allowed to decrease their spending on general education if their enrollment declines. However, the amount districts are allowed to cut is currently capped. The commission recommends removing that cap entirely so schools can further cut their budgets when enrollment dips.

Connecticut’s school-age population has been declining for several years, but no district has asked the state Department of Education for permission to cut the amount it spends on education for at least the last two years.

Though each community has a board of education that proposes an annual education budget, local councils or boards of finance are empowered to change the bottom line.

Under the commission’s plan, a city or town could give the school board unilateral control over local education spending. With the separate tax bill, the school board also would be held solely accountable to the public for that education budget.

“It’s permissive,” Sharkey emphasized. “This is not something we are mandating on towns.

The speaker added that in most states, municipalities issue separate local tax bills for education and for general government expenses.

The state is also creating a data portal so the public can see where local governments and education boards are spending their money.

Other commission proposals to curb local government costs include:

Sharkey has established himself as “a strong proponent of property tax reform…who realizes there has been an over-reliance on that tax for a very long time,” said Ron Thomas, public policy director for the Connecticut Conference of Municipalities.

“We like a lot of the proposals,” Thomas said, including PILOT and education funding reform and the changes to legal and other meeting notice requirements.

But Thomas said the commission’s proposals must be weighed in the context of the next biennial state budget. And the first indication of what that spending plan could look like comes in less than two weeks when Gov. Dannel P. Malloy submits his proposal to the legislature.

“Our eyes really have to be on Feb. 18,” Thomas said, adding that if the commission’s recommendations are used – either by Malloy or by legislators – to justify reducing grants to cities and towns “that would negate each and every (commission) proposal.”

Coventry Town Manager John Elsesser, who also serves on the MORE Commission and as president of the Connecticut Council of Small Towns, said he recognizes state finances are under heavy pressure.

The legislature’s nonpartisan Office of Fiscal Analysis is projecting major deficits topping $1.3 billion and $1.4 billion, respectively, in each of the next two fiscal years.

“The reality is we are not going to get increased funding,” Elsesser said, adding he also believes the commission’s report offers communities a path to save significant dollars.

But Elesser added that, “I think that there’s a broad understanding on all levels that property taxes are too high,” and that reducing state aid only would exacerbate that problem.