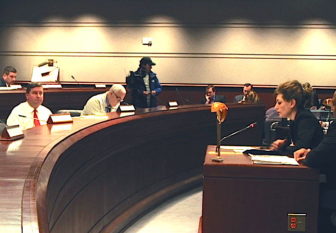 University of Connecticut President Susan Herbst testifies before the legislature’s Appropriations Committee Tuesday on the impact of proposed cuts to UConn’s budget.

University of Connecticut President Susan Herbst told state legislators Tuesday that she could be forced to lay off staff, seek concessions from her unionized workforce and make drastic cuts in programs if state funding is cut by $10.6 million, as the governor recommends.

“A reduction to the appropriation in that amount would without question have a devastating impact on every aspect of university operations, faculty teaching and research and student success,” Herbst told member’s of the General Assembly’s budget-writing committee.

Herbst testified before the legislature’s Appropriations Committee Tuesday that she is considering implementing layoffs and unpaid furlough days, cutting financial aid, reducing the courses offered, and eliminating some of the degrees the public university offers. The university would need to negotiate with unions that represent faculty and administrators to make some of the changes. Current contracts protect union employees from layoffs through June 30. A spokeswoman said layoffs will not impact faculty.

“The quality of education students receive will go down,” Herbst said. “You won’t be able to get into courses because they are full…With these kinds of cuts we just cannot run the place, and we cannot provide a quality education.”

Herbst told legislators the university would not raise tuition beyond the 6.7 percent that already has been approved for next school year, nor would it tap the school’s $80.6 million in reserves.

Asked last week how he expects UConn to cope with the proposed cut, Malloy’s budget director, Ben Barnes, pointed to UConn’s “significant reserves” and their ability to enroll more out-of-state students that pay much higher tuition.

Herbst said using the reserves — formally titled the unrestricted fund balance — as an emergency fund to turn to when state funding is cut is not realistic because that money is needed for future programs and projects.  She said the reserves are also needed to maintain UConn’s credit rating when borrowing money for construction and other dedicated projects.

Last fiscal year, the University did use $22 million from its reserves to close a deficit.

On enrolling more out-of-state students, Herbst said it is being considered.

“Everything is on the table,” she told legislators.

UConn reports that only 20 percent of their students come from other states and countries, a proportion that has not changed significantly in recent years.

Herbst said any move toward enrolling more out-of-state students would not crowd out Connecticut students.

The 10-year plan the legislature approved to build new dorms and classrooms so UConn could boost enrollment by 6,580 — called Next Generation Connecticut — will also have to be stalled if the state cuts support, said Herbst.

“The good news is we haven’t put those buildings up yet, and we shouldn’t if we don’t have the operating funds,” she said. “It’s a downward spiral.”