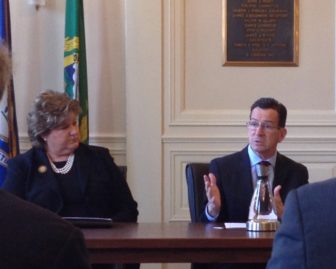 East Hartford – Despite recent arguments that his new state budget proposal is out of balance and over the constitutional spending cap, Gov. Dannel P. Malloy said Wednesday that he wouldn’t propose more spending cuts or otherwise adjust his plan.

“I met my obligations,” Malloy said. “I’ve presented a balanced budget. That’s what I have to do…You know, it’s in their (legislators’) park now.”

But the two-year, $40 billion plan, may not be in balance if Nappier is correct.

The treasurer questioned a Malloy proposal late last week to rely on $325 million in borrowed funds over the next two years combined to help make contractually obligated payments on other state debt.

This approach, which hinges on the state’s paying higher-than-normal interest rates on much of its borrowing for capital projects, could harm Connecticut’s reputation on Wall Street, Nappier warned.

More importantly, she added, there is not a guarantee, if interest rates rise later this year as expected, that investors will be willing to loan the extra funds Malloy needs to balance his budget — even if premium interest rates are offered.

The entire budget Malloy proposed for the 2015-16 fiscal year would spend $19.7 billion — and may exceed the constitutional cap by more than $102 million in that year.

The administration disclosed just over half of that problem, about $55 million, Tuesday.

According to a statement from Benjamin Barnes, the governor’s budget chief, the error was tied to faulty information collected from a data system set up by an outside vendor.

Starting next fiscal year, Connecticut must begin depositing about $48 million annually into a special reserve account as part of its conversion to Generally Accepted Accounting Principles.

And when the state borrowed funds two years ago, also as part of the GAAP conversion, it wrote in its bond covenant — its contract with bond investors — that the GAAP reserve deposits would be included in the budget, which in turn makes them subject to the spending cap.

But the governor’s plan moves these GAAP reserve payments outside of the budget — an accounting move that wouldn’t change the amount saved — but would exempt them from the cap.

“You have an obligation to the people of Connecticut and to the legislature to present a budget that does not exceed the spending cap which was overwhelmingly supported by Connecticut voters and taxpayers,” Fasano wrote Wednesday to the governor.

Barnes has suggested that Republican legislative leaders, who have argued this legally can’t be done, find $48 million in matching spending cuts to resolve their objections.

“I see lots of people saying they don’t want to make the cuts I want to make,” said the governor, whose budget would impose deep cuts on social services and health care. “But I think these are tight times,

and the legislature’s going to have to wrestle with this between now and late May or early June.”

State utility regulators said the changes will result in "meaningful savings" for customers of Eversource and United Illuminating.