As deficit options dwindle, Malloy may be staring at a rainy day 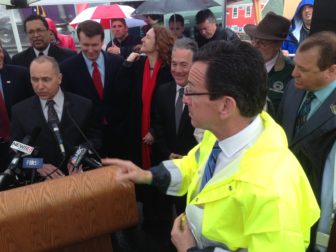 Gov. Dannel P. Malloy needed a raincoat at DOT news conference last year. He may be facing another rainy day.

Facing deficit forecasts ranging from $173 million to $191 million, the administration mustered emergency cuts of less than $14 million to offset that problem.

And with less than three months remaining in the fiscal year to craft deeper spending cuts, robust income tax collections in late April – something all parties agree is far from certain – might be Malloy’s last hope of avoiding ending in the red.

Without a strong April, the only option is dipping into the Rainy Day Fund.

Administration officials “have always been hoping for a windfall to get them out of this situation,” Sen. Rob Kane of Watertown, ranking GOP senator on the Appropriations Committee, said Wednesday. “We should have been addressing these deficit issues all along.”

But that list, which totals $13.7 million, represents less than 1/12th of the deficit as defined by Lembo. It is an even smaller portion of the shortfall being tracked by the legislature’s nonpartisan Office of Fiscal Analysis, which projected a $191 million deficit last week.

Connecticut just entered the final quarter of its fiscal year, which ends June 30. And while there technically still is time for Malloy and the legislature to craft even deeper cuts, traditionally the bulk of the budget is spent during the first three-quarters of the year.

The governor’s best hope for balancing the books might rest with the surge of income tax receipts that arrives each spring at and just after the April 15 filing deadline.

But Office of Policy and Management Secretary Benjamin Barnes, Malloy’s budget chief, has warned since February that Connecticut needs to collect a significant amount of income tax receipts just to keep the fiscal red ink from worsening.

“The comptroller’s estimates don’t take into account the budget rescissions announced today, although we had informed him they were coming,” Barnes wrote in a statement Wednesday. “If it proves to be the case that we have to do deficit mitigation it will be part of the end-of-session budget negotiations.”

Kane said he fears that an April revenue boom is not in the cards.

“I still think people are struggling in Connecticut, be it a small business or a small family,” he said. “We are not taking home the kind of income we were taking home six or seven years ago.”

If Malloy and lawmakers can’t close the deficit with deep last-minute cuts, an April revenue surge, or both, only two options remain — and both would be a political setback for Malloy.

The Democratic governor had frustrated Republicans while running for re-election last year, by pledging – despite danger signs both in the current budget and in fiscal years to come – that there wouldn’t be a deficit.

The governor’s critics argue he was engaging in semantics rooted in a legal technicality. Under state law, officials cannot close the books in the red. If a deficit is projected, it must be closed before the fiscal year’s end, even if that involves borrowing or tapping reserves.

In other words, what most officials refer to as a “deficit” is actually a “deficit projection.”

But Kane said Malloy would be hard pressed to argue he avoided a deficit if Connecticut must borrow or shrink its $519 million emergency reserve to close its books in balance.

“Certainly it is a deficit,” he said. “It is just like if you or I dove into our savings to pay our mortgage or our credit card bills.”

“The governor’s approach to dealing with the state’s ongoing financial mess has been consistent,” added House Minority Leader Themis Klarides, R-Derby said. “Unfortunately, he has been consistently wrong in underestimating its depth. This was all predictable and avoidable had he taken us up on our repeated offers to address our vanishing revenues. Now it is likely to late do anything except a thousand tiny cuts as the budget continues to crumble.’’

The governor has limited authority under state law to reduce spending modestly without legislative approval, and the $13.7 million in cuts Malloy ordered Wednesday marked his third round of rescissions since the election. The governor also ordered cuts in November and in January.

The latest round, like the earlier ones, fell most heavily on social services and on higher education. More than 40 percent of the total, about $5.8 million, was cut from a child care subsidy program run by the Office of Early Childhood. The program helps low-income parents pay for child care.

It’s unclear how the cut will impact the program — called Care4Kids — since the number of families receiving subsidies had been declining in six of the last seven months and the agency had not expected to spend all the money budgeted for it.

The state in recent years has increased the number of seats it funds in School Readiness programs, and the head of the early childhood office told legislators recently that may be drawing children away from the Care4Kids program, which doesn’t specify certain education standards.