House votes to strip Gray of power to close campus 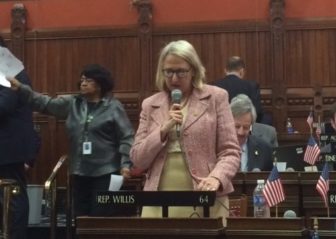 In a clear show of displeasure with the leader of the state’s system of community colleges and regional state universities, the state House of Representatives voted 86 to 56 Tuesday to block the system from closing a campus without legislative approval.

The bill, which the Senate passed unanimously last week, now heads to Gov. Dannel P. Malloy, who has expressed reservations about it.

“We will be reviewing the legislation for its effects on government functions and potential unintended consequences,” said Devon Puglia, a spokesman for the governor.

The bill was a reaction to a decision by Gregory Gray, president of the Connecticut State Colleges & Universities, to close the Meriden satellite campuses of Middlesex Community College without notifying legislators or having his governing board sign off.

“This is a scenario that could have been avoided if there had been some better decision-making,” said House Speaker J. Brendan Sharkey, D-Hamden.

Sharkey, who met recently with Gray over the issue, called the move to close the Meriden campuses “dramatic and draconian.”

“It raised other questions about what authority does the president of the Board of Regents have,” he said.

The Board of Regents is the governing board for the CSCU system, which includes the four regional state universities, 12 community colleges and online college.

State law requires a two-thirds vote of the regents before any college merges or closes. But college leaders have said they don’t believe that provision applies to the five satellite campuses in the community college system.

State law also requires legislators to be notified when a program has been recommended for closure, and regulations require the Office of Higher Education to receive notice if a program will be phased out.

Rep. Roberta Willis, D-Salisbury, co-chair of the higher education committee, said the system’s governing board and legislators should have been brought into the decision. Her co-chair, Sen. Danté Bartolomeo, represents Meriden.

“It is clear that procedures were not followed,” Willis said. “We want one more level of assurance.”

The decision to close the Meriden campuses — which enroll nearly 700 students each semester, of whom 286 also take courses at the Middletown campus — was made in an attempt to help close the system’s looming budget deficit.

Middlesex Community College President Anna Wasescha estimates the closure will cut $524,000 from her $25 million budget by avoiding having to pay utilities, security and cleaning costs.

The college system will, however, continue paying $16,000 a month in rent through December 2016. The state is trying to negotiate an exit from that lease.

College leaders have said they are waiting to see if the General Assembly acts, and if the governor signs the bill, before again offering enrollment at the Meriden campuses.

“Those who are subject to budget contracts very often come out with the most alarmist perspective of what the consequences of cuts might be,” he said Tuesday. “It was a bad move and everyone should acknowledge it was a bad move.”

While the Senate unanimously passed the bill last week, the House was divided, largely along party lines. Only six House Republicans voted for the bill. No Democrat opposed it.

Several Republicans who voted against the measure said there was ample reason to question Gray’s handling of the closure, but they expressed concern about whether legislators now were micromanaging.

She also didn’t agree with state lawmakers targeting the system of community colleges and regional state universities, while leaving alone the separately governed University of Connecticut.

“Why not UConn?” she asked.

The Board of Regents is scheduled to meet tomorrow, though the agenda does not yet include reinstating courses in Meriden.

Wasescha said during an interview that if she can’t close the Meriden campuses, she has few options for cuts.

“It will impact people and that will ultimately impact students,” she said, referring to the potential for having to cut instructional staff. “The community colleges in Connecticut don’t have sufficient funds to operate.”

“The governor believes that this instructional center is important for the city of Meriden, and the manufacturing lab is important for Connecticut’s manufacturing base,” Puglia said. “Obviously, the communication from the Board of Regents and the college president to the legislature and, for that matter, our office, was less than ideal.”