It seems not every governor can produce a traffic jam 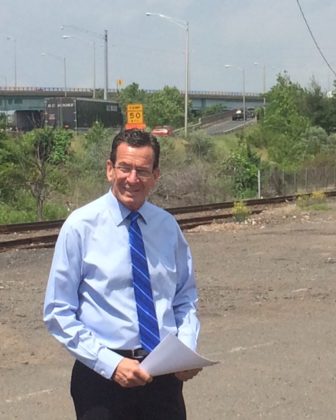 Gov. Dannel P. Malloy by the Charter Oak Bridge ramp that backs up afternoon — just not during his press conference.

Gov. Dannel P. Malloy once called himself the “anti-Christie,” a gibe at New Jersey Gov. Chris Christie. Now, his staff has produced the anti-Bridgegate: That’s when you count on a traffic jam, and it doesn’t happen.

Malloy held a press conference Tuesday at a spot picked for its view of a single-lane on-ramp to the Charter Oak Bridge in Hartford that reliably backs up onto I-91, perfect to illustrate why he has made transportation infrastructure a priority.

The governor announced that a project in 2018 will “construct two lanes of traffic to get onto the bridge, as opposed to the one lane that is currently causing such a big problem.”

“Except today,” muttered a state employee.

The ramp was clear.

Malloy shrugged off the unusual absence of a traffic jam at Exit 29, where motorists leave I-91 north to cross the Connecticut River and connect with I-84 east.

“I have to tell you about three weeks ago I came by this section, where it was backed up — and it can go as far back as Wethersfield,” Malloy said.

On that day, Malloy said, he witnessed three accidents. Eighty-eight accidents are reported there annually. On some days, the traffic backs up 1.4 miles to the Wethersfield Cove.

Malloy, who was on the second day of a road show promoting last week’s passage of a budget that sets aside a half-point of the sales tax for transportation, said he favors protecting the new revenue in a “lockbox.”

Statutory limits on how funds can be spent can be overridden by subsequent legislatures, but the governor said a state law would be helpful until a constitutional amendment can be passed.

The General Assembly is returning in special session later this month, but the call of the session does not include consideration of a lockbox.

Malloy said he intends to ask legislative leaders to broaden the call of the special session.