Malloy says there is ‘consensus’ on tax hike rollbacks 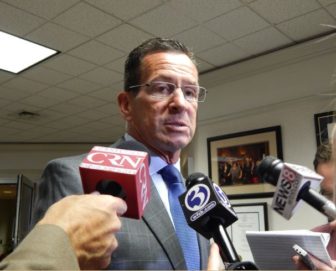 The governor told reporters the General Assembly “certainly” would reverse planned increases in the sales tax on data processing and on other online services, and that he also expects the “unitary” reporting requirement within the corporation tax to be delayed one year.

“The reality is the data tax will be taken care of,” said Malloy, who asked lawmakers on June 12 – nine days after they adopted a two-year budget negotiated with his administration – to cancel $224 million out of $1.5 billion in tax hikes in the deal.

Malloy administration officials already have begun closed-door talks with leaders of the Democratic majorities in the House and Senate about those proposals. The leadership is hoping to schedule a vote by July 1, the start of the new fiscal year.

“There have been productive conversations with Governor Malloy and Speaker (J. Brendan) Sharkey on returning the data processing tax to its current level, delaying the implementation of unitary reporting and responsible alternatives to preserve the fundamental pillars of the budget,” Senate President Pro Tem Martin M. Looney, D-New Haven, responded in writing, though he neither confirmed nor denied any “consensus.”

Sharkey, a Hamden Democrat, took a similar approach in his statement.

“We continue to have productive discussions with the governor and the Senate on potential budget revisions, and are now working with our caucus to address the concerns our members have heard from their constituents and the business community,” the speaker wrote.

When asked to clarify if that “consensus” extended beyond himself and Democratic legislative leaders to also include rank-and-file Democratic representatives and senators, the Democratic governor said, “I don’t go to caucus meetings. …I haven’t heard any real opposition to it.”

But Malloy quickly added that he expects rank-and-file Democratic lawmakers to back him in canceling the sales tax increase in the budget from 1 to 3 percent on data processing and certain online services.

“It certainly will happen with respect to the data tax,” he said.

The governor then extended his statements to include a second component of his tax hike rollback plan: to delay the introduction of unitary reporting within the corporation tax for one year.

“I believe there’s consensus” to order that delay.

The new budget bill sent to Malloy’s desk – which the governor hasn’t signed yet – calls for an immediate shift to a unitary reporting requirement. This would compel companies to share information on all of their operations — both in Connecticut and outside — and undergo a more detailed assessment of what earnings are tied to their presence in this state.

Canceling the data processing tax hikes and delaying the unitary requirement would provide about two-thirds of the tax relief Malloy proposed, about $147 million of the $224 million in the governor’s plan.

Does Malloy believe lawmakers also agree with how he would pay for these tax hike rollbacks?

The governor didn’t offer any predictions in this area, but made it clear he doesn’t want to cancel tax hikes in one area only to order new increases in another.

I don’t think this is about additional tax revenue,” he said. “I think it is about (spending) changes.”

Malloy spoke with reporters Wednesday after addressing the Connecticut Coalition to End Homelessness at Community Renewal Team headquarters in Hartford. 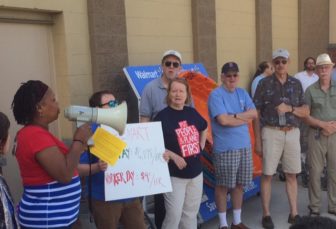 Americans for Tax Fairness protest outside a Walmart in Hartford.

The governor made his comments as Americans for Tax Fairness, a coalition of unions and left-leaning advocacy groups, staged a demonstration outside a Walmart in Hartford in support of a new business tax: a levy on companies like Walmart whose employees are paid so little they qualify for state assistance.

The so-called Walmart bill proposed during the regular session would require companies or franchisors with more than 250 employees to pay the state $1 for every hour worked by an employee paid less than $15.

The bill was endorsed by the legislature’s Labor and Public Employees Committee, but it never came to a vote in either chamber. Its supporters are trying to revive a modified version of the measure in the special session.

Tom Swan, the executive director of the Connecticut Citizen Action Group, said the money raised by the bill could be used to address other legislative concerns about the budget, such as the $46.5 million tax increase on hospitals and a reduction in Medicaid reimbursement rates.

“It actually does shock me that the hospitals aren’t joining us,” he said.

Swan said the group also was trying to counter publicity by business groups aimed at rolling back business taxes, even if it came at the cost of further cuts in social services.

“There is no doubt that part of the reason for the event is to highlight the ridiculousness of the whining by those in the business community,” he said.

Walmart was the subject of a recent study that concluded the retail giant has used off-shore tax havens to cut its taxes by $3.5 billion over the past six years.