Legislature to return Monday for concessions to business 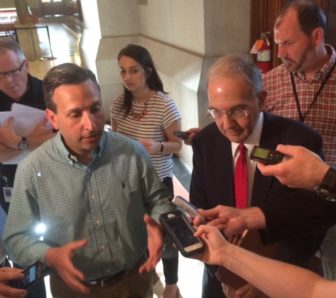 The legislature and Gov. Dannel P. Malloy would sacrifice pieces of their biggest initiatives – property tax reform and transportation, respectively – to help roll back about 10 percent of the tax hikes in the new state budget, sources from the House and Senate Democratic caucuses said Friday.

The House and Senate will return Monday at 10 a.m. for what the leaders hope will be a one-day special session to pass budget revisions and implementer bills, a bond package and two criminal justice measures.

The justice bills are the governor’s Second Chance Society initiative, which includes a reduction in prison sentences for drug possession, and a police accountability bill that would provide funding and set guidelines for the use of police body cameras.

The 2015 regular session ended at midnight June 3 without action on those bills or a series of budget-related measures known as implementers.

The tentative modifications to the $40.3 billion state budget for the next two fiscal years boost funding for hospitals and non-union nursing homes, while raiding payments to the state’s program of publicly financed campaigns. It also would cut $25 million from health care for the poor and $25 million from an undisclosed list of accounts.

House Speaker J. Brendan Sharkey, D-Hamden, said the bill also would reduce salary reserve funding in the second year of the biennium, a nudge to the administration to obtain concessions in coming contract negotiations.

“We are setting a direction to the governor as to what we’d like to see in terms of concessions, so to speak, in year two when he negotiates those contracts,” Sharkey said.

The budget changes were negotiated over the last week by the Malloy administration and by leaders of the Democratic majorities in the House and Senate and presented to rank-and-file members in closed caucuses Friday afternoon.

The biggest tax relief involves scrapping planned increases from 1 to 3 percent in the sales tax on data processing and web development services. This increase, which drew heavy fire from major corporations and the Connecticut Business and Industry Association, would have cost businesses about $152.3 million over the next two fiscal years combined.

The other tax rollback involves a one-year delay on a new unitary reporting requirement for the corporation tax.

The new budget imposes, but not until 2016-17, a shift to a unitary reporting requirement. This would compel companies to share information on all of their operations — both in Connecticut and outside — and undergo a more detailed assessment of what earnings are tied to their presence in this state.

With these changes, overall tax hikes in the new, two-year budget would drop from $1.5 billion to just over $1.3 billion. The new budget also cancels close to $500 million in previously approved tax cuts that were supposed to be implemented in the coming biennium.

Looney said the business taxes were revised despite his resistance to the notion that businesses are overtaxed in Connecticut.

“I think that was very much overblown,” Looney said.

Other last-minute adjustments include restoring $30 million in funding over two years for hospitals and $2 million for nursing homes.

To offset these changes, Democratic lawmakers scaled back their biggest initiative, but used some fancy accounting to delay the impact for a few years.

The new budget calls for Connecticut to set aside $159 million in 2015-16 sales tax receipts for communities – and then deliver it in 2016-17. Similarly, $277 million would be set aside in the second year, and not delivered until 2017-18, and $362 million would be delivered three fiscal years from now.

But under the revised deal, the state will start collecting – and delivering – the sales tax money three months later than originally planned. This lag will leave about $53 million per year available to help pay for the tax cuts in 2015-16 and 2016-17. The municipal aid initiative will adjust payments to communities down to $228 million in 2016-17, and to $288 million three fiscal years from now.

The Connecticut Conference of Municipalities, Republican legislators and others already have expressed concern that the property tax relief program could be in trouble in 2017-18, since nonpartisan analysts say a major deficit, about $832 million, is built into state finances three fiscal years from now.

The governor, who wants to dedicate a portion of sales tax receipts to transportation, agreed to reduce funding for that program in 2016-17 by $16.3 million.