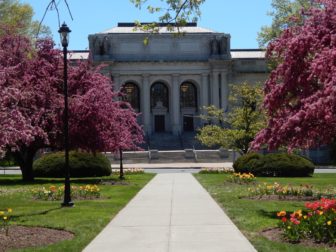 The Connecticut Supreme Court was urged on the opening day of its new term Tuesday to draw “a bright line” defining when public institutions of higher education must release findings of professional misconduct and other disciplinary records.

The case arises from efforts by Dr. Jay R. Lieberman, former chairman of orthopedic surgery at the University of Connecticut Health Center, to stop UConn from releasing documents related to another surgeon’s grievance that Lieberman was abusive to staff.

UConn refused to release two investigative reports to Dr. Michael Aronow, the surgeon who filed the grievance, a position later deemed improper by the Freedom of Information Commission and a Superior Court judge. Both have ordered the documents’ release.

“The grievance is public, the evidence is public, but bizarrely the end result is not,” Victor R. Perpetua, the commission’s lawyer, told the justices during oral arguments. His remarks echoed a complaint the faculty union made to UConn’s senior administration.

Siding with Aronow, Dr. Bruce J. Mayer of the American Association of University Professors said that UConn’s initial willingness to designate the investigative findings by the Health Center Appeals Committee and former UConn President Phil Austin as confidential personnel records was an abuse.

“Clearly such a designation could be used arbitrarily to squelch potentially inconvenient or embarrassing findings by the HCAC, and creates (as in this case) the ludicrous situation of a grievant being unable to know either the findings of the appeals committee or the administration’s decision on his or her grievance,” Mayer wrote.

UConn, which was not represented during the oral arguments, no longer is arguing against releasing the documents, Perpetua said.

But Lieberman filed an appeal of a decision by Superior Court Judge Carl J. Schuman, who affirmed the commission’s finding that the documents are public. Lieberman says that investigative documents in the case should be kept secret as elements of a university personnel evaluation.

At issue is whether or when disciplinary records should fall under the privacy protections the General Assembly has accorded to personnel evaluations for educators, though not other public employees.

The Freedom of Information Commission has taken a narrow view of the FOI exemption for personnel evaluations, concluding it refers only to formal annual assessments.

Even though he ultimately ordered the document’s release, Schuman disagreed with the commission’s limited definition. He expressed sympathy to UConn in his decision by writing, “The line between an evaluation of performance and an evaluation of misconduct is blurry at best.”

The Supreme Court signaled an eagerness to define that line between by exercising its discretion to remove the case from the the docket of the lower Appellate Court for a direct review by the high court.

“Isn’t that a kind of bizarre, alternate universe?” McDonald asked.

Aronow, who left and rejoined the UConn faculty during the case, sat in the front row, listening to the arguments. Lieberman, who no longer is at UConn, was not present.

In a grievance filed Sept. 30, 2011, Aronow accused Lieberman, then his superior, of violating multiple sections of the school’s code of conduct with repeated episodes of “incivility, vindictiveness, attempted intimidation, disrespectfulness, and harassment.”

Aronow, who later would assert his complaint made him a whistleblower under state law, said Lieberman’s unprofessional conduct was directed at him, other faculty, medical students, orthopedic residents, hospital staff and staff and physicians outside the UConn system.

The grievance was heard by the Health Center Appeals Committee, described in court filings as “an independent body.” Under university rules, the committee’s findings then would be accepted or rejected by the executive vice president for academic affairs within 30 days.

Austin, who was the acting executive vice president, instead took four months to conduct his own investigation. In August 2012, Austin notified the appeals committee of his decision, but withheld his conclusion and the committee’s report from Aronow.

“Because of the nature of the findings of the Health Center Appeals Committee and the recommendations Dr. Austin will make,” Aronow was told in writing, “both reports are considered performance evaluations of a faculty member of a Connecticut institution of higher learning and as such, as protected from release to anyone other than the person’s supervisor unless the person gives permission in writing.”

Aronow eventually got to examine the two reports in connection with his related complaint before the Commission on Human Rights and Opportunities that he was a whistleblower illegally targeted for retaliation by UConn.

But Aronow was not given copies, the documents still are not considered public documents, and he and his lawyer are barred from publicly discussing them.

Mirma, Perpetua and Arnow’s lawyer, Heena Kapadia, all agreed that that Aronow’s examination of the reports under a protective order did not render the case moot.

Arnonow said after the hearing that Austin eventually sent him a one-sentence letter confirming his grievance was denied, but the basis for the denial remains secret under the terms of a protective order, still off limits to the public.