Tribes set to pitch legislature on new casino in ’16 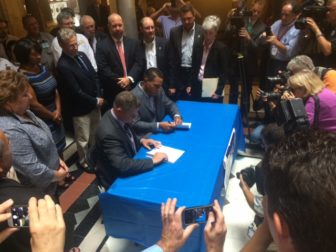 Connecticut’s two tribal casinos staged a ceremony Thursday marking the start of a formal search for a community willing to accept a new gambling hall they want to maintain market share against competition coming to Massachusetts.

The Mashantucket Pequots and Mohegans, owners of Foxwoods Resorts Casino and the Mohegan Sun, want to jointly pick a development site and win local approval before asking the General Assembly in 2016 for legislative authorization that is less than a sure bet.

The tribes set aside their contentious history as 17th-century combatants and modern business competitors Thursday to sign a deal creating the joint entity, MM4CT Venture, to face a common enemy: MGM Resorts International, licensed to build a casino in Springfield, Mass.

“While our past may have been marked by conflict and competition, our present and future will be defined by cooperation,” said Rodney A. Butler, the Mashantucket Pequot tribal chairman.

“Outside interests have made it perfectly clear that their business model depends on taking money and jobs from our state,” said Kevin P. Brown, chairman of the Mohegan Tribal Council. “We’re not going to let that happen without a fight.” 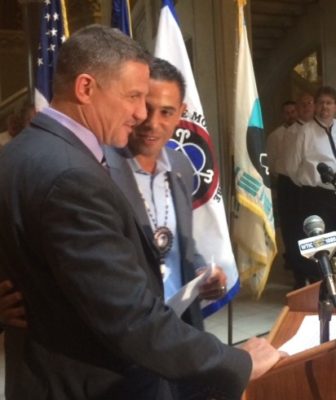 Brown and Butler then sat down at a table in the Hall of Flags at the State Capitol to sign the joint-venture agreement, surrounded by tribal members and supporters, notably construction unions eager for work. Lt. Gov. Nancy Wyman also spoke in support.

Pearce Real Estate was named as the agent to oversee an RFP process that will advertise the tribes’ requirements for a development site next month and close the process by the end of November. Developers already have proposed sites in Enfield and East Hartford.

But the tribes, whose casinos are in eastern Connecticut, still face significant hurdles beyond the challenge of finding a community, preferably in the I-91 corridor north of Hartford, willing to welcome a casino situated to intercept Connecticut gamblers on the way to Springfield.

They failed in the 2015 session to win passage of an authorization bill that would have given them the right to develop Connecticut’s first casino off tribal lands without identifying exactly where the facility might be.

The bill never came to a vote after Attorney General George Jepsen warned that giving the Pequots and Mohegans exclusive rights to a new casino could jeopardize the tribes’ current profit-sharing deal with Connecticut and subject the state to claims of illegal favoritism.

Instead, the legislature gave the tribes a symbolic victory by passing a bill allowing the tribes to seek local support for a casino — a search they most likely could have undertaken without formal authorization.

“We’ll continue to work with our legal counsel and the attorney general in the state as well, but we feel they are surmountable,” Butler said.

Butler said he is aware of a half-dozen developers ready to answer the tribes’ request for proposals.

Owners of the Enfield Square Mall asked Enfield officials this week to consider supporting a bid to attract a casino to their site, which has direct access to I-91. And the owner of the vacant Showcase Cinema in East Hartford, slightly outside the I-91 corridor, made a pitch to the tribes months ago.