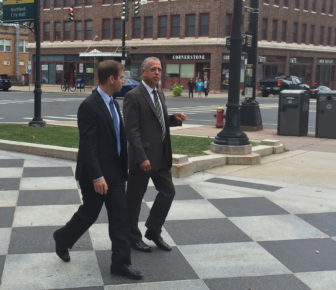 There was finality and acceptance in Hartford, confusion and defiance in Bridgeport. Two Democratic urban mayors who lost primaries last week came to different conclusions Tuesday about their ability to survive politically.

“This election is too important for Bridgeport and its future to be decided by red tape in the Secretary of State’s Office,” Finch’s campaign manager, Maryli Secrist, said in a statement. “We’re taking this issue to court, and we’re confident that this matter will receive a fair and just hearing.”

A spokesman for Secretary of the State Denise Merrill said late Monday afternoon that the Job Creation Party had missed a deadline to designate Finch as its mayoral nominee. The minor party was Finch’s last hope for re-election after losing a three-way primary to former Mayor Joseph P. Ganim.

Mary-Jane Foster, who finished a distant third in the primary, announced Monday she would not pursue an independent candidacy. On Tuesday, all bets were off as Foster assessed her ability to stop a return to city hall by Ganim, driven from office in 2003 by a corruption conviction.

“I’m still assessing. I met with some supporters. I called some others,” Foster said. “I’m frankly overwhelmed by the response. My phone has nearly burned up. So I’m weighing all the options. I couldn’t be more touched by all the people who have called.”

Ganim and Foster had successfully petitioned for places on the November ballot, giving them options regardless of the outcome of the primary. Finch, apparently unwilling to publicly entertain that he might lose the nomination for a third term, opted for another route.

A supporter created the Job Creation Party and gathered sufficient signatures to place himself on the ballot as a placeholder. He withdrew as a candidate, but failed to designate Finch as his replacement by the deadline of Sept. 2 — two weeks before the Democratic primary.

There already are three candidates on the November ballot: Ganim, Republican Enrique Torres and Charles Coviello, a minor-party candidate.

Finch did not return calls for comment Tuesday. On Monday night, he told The Mirror he was confident of finding a way back onto the ballot.

In Hartford, Segarra provided an expected end to his fight for a second four-year term after five years as mayor. He completed the term of his predecessor, Eddie A. Perez, who resigned after his corruption conviction, then won a four-year term in 2011.

“The voters have spoken,” Segarra said.

The mayor arrived on foot with Bronin for a press conference outside city hall. The two rivals met first at the Hartford Public Library.

Bronin faces token opposition by a Republican, Ted Cannon, and a petitioning candidate, Joel Cruz Jr., in November. In a city where wining the Democratic primary is tantamount to election, Bronin thanked Segarra and said the two men already have begun transition talks.

It was a tidy end to a bruising campaign.