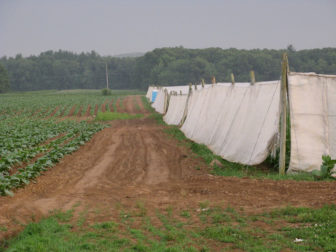 Washington – Before the Cuban Revolution brought on the U.S. economic embargo on the island about 55 years ago, Cuba’s world-class cigars were often wrapped in special tobacco leaves grown in Connecticut.

With the market for cigars shrinking, and President Obama making openings to Cuba, Connecticut farmers want access to that market again.

“Cuba is known for the Cuban cigar. We want to be part of that,” said Ed Kasheta, a tobacco grower in South Windsor.

Kasheta Farms, a family operation since 1906, has grown as much as 40 acres in  tobacco. That acreage has dropped to 15 because of declining demand.

Connecticut produced about 3.8 million pounds of tobacco in 2012, according to the latest figures available from the U.S. Department of Agriculture. It ranks eighth among all states in the production of tobacco.

But the industry has shrunk as the popularity of smoking wanes.

Kasheta is hoping to reverse the trend. Besides providing Cuba with wrapper leaf, which can determine much of the cigar’s overall flavor, Kasheta said Connecticut tobacco could be used as filler to add additional taste.

Since the embargo cut Cuba off from Connecticut-grown tobacco, the island has been producing its own Connecticut wrapper leaf, which is distinguished by its thinness and light color.

But Cuban cigar makers remember the quality of Connecticut-grown tobacco.

A law enacted in 2000 allowed U.S. farmers to sell food and agricultural products to Cuba for humanitarian reasons. Tobacco was not included in the list of products that could be sold.

Kasheta and other Connecticut tobacco farmers, want to change that. So does Sen. Chris Murphy, D-Conn., who is a co-sponsor of the “Freedom to Export to Cuba Act,” a Senate bill that would abolish the embargo.

Murphy said the time to end the embargo is here, in the wake of Obama’s steps re-establish diplomatic relations and allow more travel to Cuba and increased, if still limited, trade with the island.

“This issue is moving very fast,” Murphy said. “I don’t think that before the president acted, it was in the realm of possibility to end the embargo. We’re living in a different world today.”

Murphy also said a marriage between the Connecticut and Cuban tobacco industries would be idyllic.

“They are both in the premium tobacco business,” he said.

But John Kavulich, president of the U.S. Trade and Economic Council, said the time is not ripe politically for an end to the embargo.

He says Cuba has had a tepid response to U.S. overtures. Purchases of U.S. agricultural products by Cuba actually dropped by 40 percent since Obama first moved to ease sanctions in December.

“There is an increasing belief that the Cuban government has to reciprocate before additional steps are taken, “Kavulich said.

He also said that GOP leaders in the House and Senate will block consideration of the embargo –ending legislation because they don’t want to give Obama a foreign affairs victory, or any advantage, even as more lawmakers of both parties oppose keeping the embargo.

Kavulich also said “there is a general deference in Congress to members who have a connection to a country…there are members of both parties in both chambers who are of Cuban descent.”

Those Cuban-American lawmakers are fierce defenders of the embargo.

Kavulich also said Congress would be more likely to change the embargo in 2018, when President Raul Castro said he’ll retire.

Current law prohibits lifting of sanctions unless Raul Castro, or his brother Fidel Castro, are no longer in power.