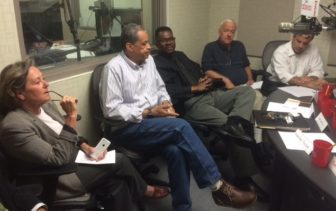 Bridgeport – As the mini-series that is this city’s mayoral election nears its final episode, the presumptive stars of the show are competing with a colorful supporting cast hungry for air time.

Joe Ganim, the ex-con and ex-mayor, and Mary-Jane Foster, the woman cast as the best hope for barring his return to city hall, seemed lost Tuesday night in a radio studio crowded with seven mayoral candidates.

The frontrunner since winning the Democratic primary in this overwhelmingly Democratic city, Ganim was well-served by the crowd. No one drew him into a compelling exchange about what his corruption did to Bridgeport.

Foster, a University of Bridgeport vice president, made little effort to draw on the rich back story she shares with Ganim, whose corruption she blames for the demise of a development company she shared with her husband. Her gibes at Ganim were subtle.

“I’m often asked why I’m running for mayor, and I say I believe Bridgeport deserves better. Bridgeport deserves so much better. And I want to be the honest choice for change here,” said Foster, who used the word “honest” three times in her two-minute opening statement.

Foster fell silent for surprisingly long stretches during the 90-minute debate broadcast live on WICC-AM. Others happily, and at times colorfully, filled the void.

“Good evening, Bridgeport!” began Chris Taylor, a burly retired demolition contractor with a big voice. “Lock the doors. Turn off the TV and your cell phone. Put on a pot of coffee and get comfortable. If you’re driving, pull over. We’re about to have a mayoral debate.”

Taylor, one of four petitioning candidates on the ballot and in the studio, then succinctly and memorably introduced himself: “I’m a man of the people. Warning! I am not perfect. I’ve made mistakes and will continue to make mistakes.”

Ganim won a three-way Democratic primary in August, defeating Mayor Bill Finch, the two-term mayor, and Foster. After fumbling an effort to stay alive as a minor-party candidate, Finch then endorsed Foster, who had hedged her bets in the primary by securing a line on the November ballot as a petitioning candidate. 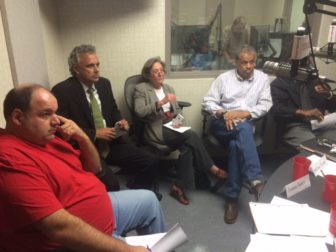 The other candidates in the studio and on the ballot: Enrique Torres, the Republican nominee who ran for mayor in 2003 and 2011; Charles Coviello, endorsed by the New Movement Party; David Daniels, a retired Bridgeport police officer; Tony Barr, an activist; and Taylor.

Ganim, Foster, Coviello and Torres all have waged repeated campaigns for mayor. Only Ganim, the mayor from 1991 until his corruption conviction in 2003, was successful.

Coviello said he and Torres, by virtue of their repeated campaigns, somehow deserve some credit for Finch’s defeat. “We said no to the incumbent mayor,” he said. “By the way, you owe me a thank you, Mary-Jane and Joe, because the incumbent mayor is no longer there.”

No thanks were forthcoming.

Barr demanded the votes of listeners, insisting they get up “off their asses,” an exhortation he employed three times. Alas, his radio audience missed that portion of his pitch, as a producer employed the station’s seven-second delay.

“Bridgeport, Conn., is a joke, been a joke for the past 35 years,” Barr said. “We have the worst school system. No jobs. Worst police department.”

For good measure, Barr, who is black, finished his opening statement by insulting “churches of color” in the city, pronouncing them “a total disgrace.”

“O-kay,” said the host, Jim Buchanan, drawing out the word. “Tony Barr there.”

Ganim, who is supported by Mario Testa, the long-time Democratic town chairman, presented himself as an agent of change, while offering few specific plans for change.

“We’ve already taken an important first step towards setting this city on the right track,” Ganim said, referring to his primary victory. “Now, in my view, we have to finish the job.”

Taxes are too high, but he didn’t say how he might reduce them. The schools are struggling, but he suggested little beyond getting “back to basics.”

He distanced himself from Finch’s ill-fated and unpopular support for the state takeover of the Bridgeport schools, including disbanding the elected Board of Education.

“I can tell you this: I’m not into taking over the school system,” Ganim said.

Ganim ignored the few gibes about his corruption conviction, most of which came at the debate’s conclusion. The same was true of Foster, who ignored criticism of her alliance with Finch. Torres said Ganim must answer for Testa, Foster for Finch.

“I think for me the most important thing I fought against in the city of Bridgeport for over 30 years is the political machine that’s held us back,” Torres said. “The Democrat, Joe Ganim, is supported by one of the two machine operatives in the city. The other, Mary-Jane Foster, is supported by the other one.”

“We haven’t really addressed here today the whole question of education. We haven’t addressed outlandish taxes that this city is faced with and how were going to reduce it,” Coviello said. “I see a lot of generalities here, but I don’t see anybody talking about specifics.”