All eyes on Bridgeport, but races in 165 municipalities 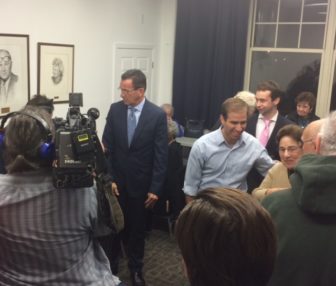 A Bridgeport mayoral contest featuring a comeback attempt by Joseph P. Ganim, the Democrat forced from city hall by his corruption conviction a dozen years ago, tops the list of races to watch today as voters choose chief elected officials in 130 cities and towns.

At the other end of the coastline, former Congressman Rob Simmons, 72, who lost his congressional seat in 2006, is attempting a lower-key return to elective politics as the Republican challenger for first selectman in Stonington, a seaport community of 18,000.

In all, voters go to the polls in 165 of Connecticut’s 169 communities to elect school boards, councils or other municipal office holders. The exceptions are four towns that still hold local elections in May: Andover, Bethany, Woodbridge and Union.

The races are a mix of the bitterly contested and pre-ordained, fights with strictly local consequences, those that could reflect on the potential of municipal officials looking to move up the ladder, and a handful that Republicans hope might be influenced by the unpopularity of the state’s Democratic governor, Dannel P. Malloy.

“Last year’s race was about me, where I beat them by 28,000 votes. They forget that,” Malloy said Monday night after dropping in on workers at Democratic state headquarters in Hartford. “Local elections are just that; they are local elections. Sure, there is a little carry-over flavor from anything that’s going on at any particular point.”

Fairfield tops the list of communities where the GOP hopes to take control of municipal government, said J.R. Romano, the Republican state chairman.

Chris Tymniak, the Republican challenger, has made the prospect of losing a major corporate employer, General Electric, a central element of his challenge to the Democratic first selectman, Michael Tetreau. GE is exploring a move out of state, blaming the state’s business climate and taxes.

Both state parties have supported their Fairfield candidates with mailers and other assistance, even though party officials say they typically can only help at the margins.

“For the most part, all politics is local,” Romano said. “I like to say we’re here to get you from the five-yard line to the goal line.”

Bridgeport and Hartford, respectively the state’s largest city and its capital, will pick new mayors: Both cities’ incumbent mayors lost Democratic primaries in September and will not be on the ballot today.

Malloy to work with ‘whoever is mayor’ in Bridgeport

Malloy backed the loser in the Bridgeport primary, Mayor Bill Finch. He’s made no secret of his discomfort at seeing Ganim, who served seven years in prison on federal racketeering and corruption charges, return to power.

“It’s an unusual election,” Malloy said. “It probably will receive, one way or the other, some national attention for its notoriety. But when the votes are counted, whoever is mayor we’re going to work with.”

Ganim is one of seven mayoral candidates on the ballot in Bridgeport. His two major opponents are Republican Enrique Torres and Mary-Jane Foster, a Democrat running as a petitioning candidate after finishing third in the primary behind Ganim and Finch.

Malloy has no reservations about Luke Bronin, who beat Hartford Mayor Pedro Segarra in a Democratic primary and is heavily favored to top a field of four today. Bronin is Malloy’s former general counsel, and the governor intends to visit Bronin’s campaign headquarters today and attend his victory party tonight.

In all, there are more than a dozen races where the incumbent lost a primary or chose not to run. Mayor Scott Jackson of Hamden, a Democrat whom Malloy had tapped for some high-profile assignments, is among those not seeking re-election.

At least two Republican local officials who make no secret of their ambitions for statewide office are up for re-election: Mayor Mark D. Boughton of Danbury and First Selectman Timothy M. Herbst of Trumbull.

Boughton, 51, twice a candidate for the GOP gubernatorial nomination, is unopposed for an eighth two-year term.

Herbst, 35, is challenged by Democrat Vicki Tesoro. If Herbst can’t be unseated, Democrats at least hope to keep his vote totals down, perhaps taking a little luster off any future statewide campaign.

Three women, two Democrats and a Republican, will try to convert offices won in upsets two years ago into safe seats with second-term victories today.

Stewart is not the only first-term Republican mayor up for re-election in a small city. Others are David S. Cassetti in Ansonia, Ken Cockayne in Bristol and Manny Santos in Meriden.

Mayor Harry W. Rilling, a Democrat who unseated a GOP incumbent two years ago in Norwalk, seeks his second term. Mayor Neil M. O’Leary, a Democrat is favored to win re-election in a four-way race in Waterbury.

New Haven Mayor Toni Harp, a Democrat who won an open seat two years ago, has only token opposition.

Celebrating a political anniversary, Malloy described himself as nostalgic: “It was 20 years ago I was elected mayor of Stamford.”

Stamford’s City Hall turned Republican after Malloy chose not to seek re-election as mayor in 2009, the year before he won his first-term as governor. Democrat David Martin regained the mayoralty two years ago. The winner of a four-year term, Martin is not on the ballot this year.

Hit the ‘easy button’ in these races

(A sharp-eyed reader of the above two paragraphs might note that neither major party endorsed a candidate in Willington and Wolcott. That’s not a typo. Both towns have incumbents unaffiliated with a major party: First Selectman Christina Beebe Mailhos of Willington and Mayor Thomas G. Dunn of Wolcott.)

There are also four communities where the major parties have settled on the same candidate.

Skulczyck is an unexpected choice for a free pass. He is a first-term selectman whose margin of victory two years ago was reported on election night as one vote. A recount gave him a two-vote win, 854 to 852.

And then there’s ‘Mayor Bob’

In Prospect, Mayor Robert J. Chatfield is opposed by a Democrat, Theresa Cocchiola Graveline. But Chatfield has been re-elected every two years since taking office in 1977, two years before the birth of the man expected to be Hartford’s next mayor, 36-year-old Luke Bronin.

Candidates for the Top Municipal Offices
130 cities and towns are electing mayors, first selectmen and other top offices.
Secretary of the State’s Office
Related Stories