Senate Dems break with House, go own way on deficit 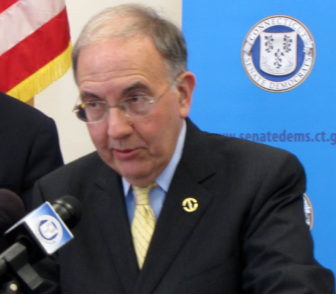 The retirement incentives were offered in place of suspending the state’s public financing of campaigns, a measure included in a list of spending cuts they jointly proposed Monday with House Democrats.

The Senate Democratic plan, which would save $350 million in net costs this fiscal year and $209 million in 2016-17, also would avoid several other controversial moves in competing deficit-mitigation plans.

An estimated $163 million would be saved over this fiscal year and next, Senate Democrats say, by paying incentives to encourage senior state employees to retire.

Though full details of the retirement incentive program proposal were not available, the projected savings are very similar to those in an incentive plan proposed by minority Republican caucuses in the House and Senate.

“The Senate Democratic Caucus believes that it is vitally important that we come to the table with a proposal that makes achievable structural changes to our budget,” said Senate President Pro Tem Martin M. Looney, D-New Haven.

Among the proposed cuts the Senate Democratic blueprint would avoid are:

Senate Democrats had jointly issued another plan last week with the majority Democratic caucus in the House.

That plan included a controversial proposal to suspend the public financing for the 2016 state election cycle, a move that would produce a one-time savings of $11.7 million.

The cut quickly was decried by clean-election advocates, including the State Elections Enforcement Commission, Common Cause and the Connecticut Public Interest Research Group. Senate Democratic leaders indicated they wanted to avoid this cut, but only deferred to House Democratic leadership because the latter opposed a retirement incentive program.

The new plan offered just by Senate Democrats does preserve a number of proposals from the earlier joint blueprint, including:

“This proposal best represents the position of the Senate Democrats,” Majority Leader Bob Duff, D-Norwalk, said. “This plan protects our Rainy Day Fund, takes into account the needs of business by making adjustments to our tax structure and preserves critical safety net programs.”

“We are pleased to see the Senate Democrats’ change of heart concerning the suspension of the Citizens’ Election Program,” House Speaker J. Brendan Sharkey, D-Hamden, and Majority Leader Joe Aresimowicz, D-Berlin, wrote in a joint statement. “We are confident that we will be able to find the necessary funds to close the deficit gap without affecting our landmark campaign finance program that has brought clean elections to the citizens of Connecticut.”

But the House Democratic leaders quickly added that an incentive program that produces a surge in worker retirements weakens a pension fund over the long haul. And the state employees’ pension fund already is in poor shape, with enough assets to cover less than 42 percent of its long-term liabilities.

“Every economic expert knows that a retirement incentive program, despite some short-term savings, can wreak havoc on long-term fiscal health,” Sharkey and Aresimowicz wrote. “…Should we find it necessary to consider a retirement incentive plan, we must also ensure that it is carefully crafted to make long-term structural reforms to ensure that our pensions and budgets are sustainable going forward.”

House Minority Leader Themis Klarides, R-Derby, called the new Senate Democratic plan “a welcome departure from their past practices. It mirrors many of the elements in the Republican plan. It differs significantly from the Democratic proposal released Monday. Like ours, it keeps the Rainy Day fund intact and provides savings through a state employee retirement plan. It begins to address long-term structural deficit issues beyond our current problems that threaten the sustainability of our core government functions, issues that Republicans have insisted must be on the table. We look forward to seeing the details.’’

“I want to thank the Senate Democrats for their willingness to reconsider and make adjustments to many of the proposals being discussed in budget negotiations,” Senate Minority Leader Len Fasano, R-North Haven, said. “As Republicans have made very clear, we cannot only address the deficit in the current year. We must adopt a proposal that solves the 2017 deficit as well. And we must work together to substantially mitigate future shortfalls in 2018 and 2019 and implement long-term structural changes to the state budget. We look forward to continuing discussions regarding deficits in the current year and beyond.”

“We are going to be reviewing it closely and circling the areas where there is overlapping agreement,” Malloy spokesman Devon Puglia said. “We look forward to productive discussions going forward.”