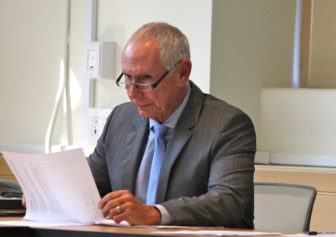 CSCU President Mark Ojakian pushed back Monday against faculty allegations that the college system is “under assault” by his adminstration.

Facing a major budget shortfall, officials of the Connecticut State Colleges and Universities angered faculty when they asked unionized staff for unprecedented concessions.

“We are operating on sort of bare bones right now,” Ojakian said, pointing to delays in filing vacant positions and reducing library operating hours. “These are real cuts…Each cut we take is going to mean we are going to have to do more with less, and that is the reason why I am trying to provide some flexibility in a collective bargaining agreement.”

But an official with a national labor union — the American Assocation of University Professors — classified the proposals as being in “the true spirit of Scott Walker.”

Scott Walker is the Republican governor of Wisconsin who successfully pushed state legislation that limited the collective bargaining rights of public employees.

“I don’t intend to destroy the system and was not hired to basically be the hatchet person. I know there is a lot of angst out there because people don’t know me,” he said. “Sure there are some very tough proposals, but they were proposals. They are meant to be discussed. They are not meant to change the entire system of higher education or dismantle it. I am not Scott Walker. I am not sent here or wasn’t hired to see the the destruction of higher education. I’m here to built it up and to be its advocate.”

Union leadership needs more convincing about the system’s new president, who was appointed without interviewing any other candidates.

“Mr. Ojakian’s hurried appointment speaks volumes about just how badly the governor and the [Board of Regents] want to force a radical change in Connecticut’s system of public higher education.  The BOR has been mismanaged so badly that Mr. Ojakian, an experienced contract negotiator, has been called in to clean up the mess and force ‘reasonable flexibility’ on the citizens of Connecticut through an atrocious contract that will ultimately destroy the state university system,” reads a new website created by the union that represents faculty at the Connecticut State Universities.

Proposed changes to tenure have drawn the most ire among faculty. The changes would allow college leaders to transfer tenured staff among campuses without a guarantee of retaining tenure, would no longer allow counselors and librarians to earn tenure, and would make it easier to close programs and lay off tenured staff.

On Monday, Ojakian elaborated on why transferring tenured staff may be needed.

“What we are trying to do is come up with a package that allows us to save some money [and] provides for more flexibility in terms of using our resources,” he said. “I think the concept is to find a way that everybody can agree to that we can share these resources across the system. So if a program is not going to be offered at one institution because of low enrollment, and we have another institution that is going to offer it, why can’t we have the conversation about faculty moving to that institution?…We are not just going to do it to save money, but we are going to do it for programatic reasons and to serve the greatest number of students.”

Listen to the full interview on WNPR’s “Where We Live”