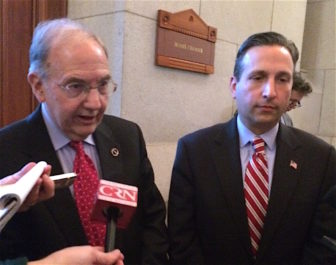 While the General Assembly is expected to adopt a plan in special session Tuesday to close most or all of this fiscal year’s budget deficit, restore some funds for hospitals and finance modest business tax breaks, almost 40 percent of the plan diverts resources from specialized funds and various one-time sources.

And while majority Democratic legislators said the plan also would launch several efforts to reform state spending in the long-term, the top Republican in the Senate said the push to restructure the budget isn’t sufficient.

Looney said the plan would provide $350 million in savings in this fiscal year’s budget, which is projected to be between $118 million and $254 million in deficit.

Besides mitigating or eliminating that shortfall, the savings also will be used, Democratic legislative leaders said, to restore some earlier cuts to hospitals and social service programs, as well as to finance modest corporation tax cuts.

The Democratic plan, which Republican minorities in the House and Senate are expected to vote against, also would produce $212 million in savings in the 2016-17 fiscal year, Looney added. According to the legislature’s nonpartisan Office of Fiscal Analysis, next fiscal year already faces a built-in hole of $552 million.

But according to a summary of the plan obtained by The Mirror, just over $135 million in general fund savings this fiscal year would come by diverting or raiding other programs, including two of the biggest initiatives Gov. Dannel P. Malloy and Democratic legislators built into the current budget.

Just over $35 million in revenues owed to the Special Transportation Fund would be diverted, which probably would force officials to draw down the fund’s reserve. Nonpartisan analysts already have warned that the transportation fund — despite being targeted in June to receive an annual share of general fund sales tax receipts — is on pace to fall into deficit by the 2018-19 fiscal year.

Lawmakers and Malloy promised in the new budget to share sales tax receipts with communities as well — but most of that new funding wouldn’t be delivered until next fiscal year.

Still, Connecticut is supposed to start preparing for that program now by reserving more than $100 million this fiscal year, to be paid out in 2016-17.

Advocates for cities and towns already have been questioning whether communities are likely to see much or any of that money, given the growing state deficits looming in future years. And that was before any proposals to reduce saving for the program were introduced.

Other fund diversions used to supplement the new deficit-mitigation plan include:

But it also restores about half of the $62 million Malloy wanted to cut from Connecticut hospitals, while also adding back a portion of those funds taken from private, nonprofit social services. 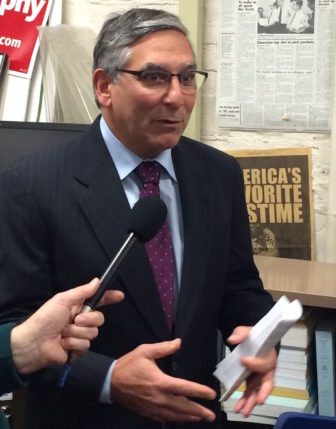 While GOP leaders would not discuss specifics of the closed-door negotiations, they said Republicans weren’t satisfied the final package would do enough to control state spending in the long term.

Fasano said Monday that remains disappointing, since the GOP does support a part of the plan that involves rolling back a portion of the corporation tax hikes Malloy and the legislature ordered back in June.

“We think the business end (of the deficit-mitigation bill) is a very smart thing to do,” Fasano said.

Attorney General George Jepsen wrote in an opinion last month that the cap, often a major weapon in political and policy fights, is unenforceable because of the legislature’s failure to formally implement the measure.

The cap has been particularly controversial over the past decade as rising retirement benefit costs ate up much of the allowable spending growth.

This prompted governors and legislatures to either move expenses outside of the cap system, or to exceed the cap legally — both of which frustrated many fiscal conservatives.

Democrats wouldn’t commit to new language to re-establish an enforceable constitutional cap at this time.

But Looney said Monday that the deficit-mitigation bill would set up a new commission to study the spending cap.

Fasano said promises to address Republicans’ concerns in the future “always seem to fall through the cracks.”

It also would create a process to explore the closure of the Connecticut Juvenile Training School, including possibly setting a target date for closure. The school incarcerates juveniles whose cases were adjudicated in juvenile court and whose crimes were not serious enough to be heard in adult court.