UConn Health paid $192,500 to the former John Dempsey Hospital CEO who chose to resign because of a pending reorganization – a waste of resources, state auditors wrote in a report released Wednesday.

“Payments made by UConn Health should have some discernable benefit to the institution,” auditors John C. Geragosian and Robert M. Ward wrote.

In a response included in the audit report, UConn Health officials said the then-chief executive had been earning more than $400,000 annually, and that the payment was an alternative to having him perform “other duties” at the hospital for up to six months. “The CEO position is a highly visible one with access to a range of sensitive information,” they wrote. 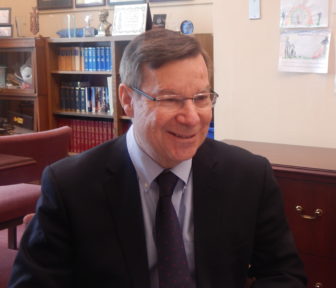 Dr. Mike Summerer stepped down as CEO of the Farmington hospital in August 2013. The UConn Health response to the audit – which did not name Summerer – said the resignation occurred through a “negotiated agreement” because of a pending reorganization, and said the payment allowed the organization to secure a release of claims he could have filed against the health center.

“[I]t is the Agency’s position that the lump sum payment in question was a reasonable risk management decision that was consistent with Board of Trustees approved policy,” health center officials wrote.

UConn Health policy allows administrators to give a lump sum payment rather than notice to a manager who is leaving because of a layoff, position elimination or management reorganization. In this case, officials made the payment as an alternative to finding other responsibilities for the CEO until his separation date, according to the audit.

The auditors recommended that UConn Health only allow employees to receive a lump sum payment when they resign, as an alternative to giving notice, if the person has no skill set that can benefit the institution.

The auditors also raised concerns related to employees being paid for compensatory time and the cost of moving expenses; various contract awards; and health center inventories and equipment losses.

In its response, the health center said maximum amounts are generally tied to one month’s salary or $15,000, but are determined on a case-by-case basis, and said capping reimbursement to the same level used on the Storrs campus “could inhibit its recruiting in the highly competitive marketplaces in which it competes for talent.” Still, officials agreed about the need for a formal policy specifying a maximum reimbursement level.

In response, the health center said it’s “not always practical or desirable” to mandate when compensatory time can be used in a health care environment. The response cited clinical areas and departments with staff shortages or significant management issues, saying it might be preferable to require a manager to delay the use of compensatory time “to meet organizational need.” 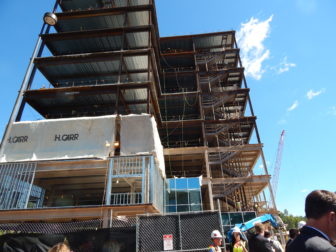 The outpatient center under construction at the UConn Health campus in Farmington in 2013.

Wednesday’s report also raised some new contract issues regarding the controversial decision in December 2012 to finance $203 million for a new outpatient center on the Farmington campus at more than 4.8 percent interest.

Ward and Geragosian estimated in a report last July that if more traditional financing — such as state revenue bonds — had been used Connecticut would have saved more than $76.8 million.

UConn, which originally had been directed by the General Assembly in October 2011 to use a public-private partnership to develop the ambulatory care facility, determined shortly thereafter that this approach wasn’t feasible.

The auditors wrote Wednesday that an “ambiguous selection” criteria was used to choose a contractor to construct the shell of the ambulatory care center.

UConn’s initial request for proposals implied the award would be based on a variety of factors, but a subsequent addendum indicated that the contract would be awarded to the lowest bidder, according to the audit.

Ward and Geragosian also noted that a $320,000 contract award for real estate advisory services was increased later more than fivefold — to $1.72 million — to cover arranging the financing for the new outpatient center.

UConn officials countered in their written response to the auditors that the original contract guidelines had warned all parties they would be asked to settle on a separate fee for financing.

Health center spokeswoman Lauren Woods added Wednesday that because this extra fee had been anticipated, “bidding companies submitted information relating to this fee as well,” in their original contract bids. “All proposals received in response to the RFP were evaluated and scored by a UConn Health selection committee. … Because the original RFP had details related to the pricing of such a fee, there was no basis for re-bidding that service.  UConn Health negotiated a favorable fixed fee payment, which is well within the normal range of a fee paid for this service for a transaction of this size.”

The audit also states that approximately 3,100 pieces of equipment assets had not been inspected or located for inventory purposes in more than two years.

And health center officials deleted about 5,700 items from the inventory list in the 2013-14 fiscal year after being unable to locate that equipment over the previous two years.

“These items, which we consider lost, should have been reported” as such to the auditors, Ward and Geragosian wrote, adding that the book value of these items was $235,132.