Health care is rapidly changing, and the coming year could be a key time for many shifts that have long been in the works.

“I haven’t seen a time in my almost 10 years here in the state where there’s so much happening in health care,” state Healthcare Advocate Victoria Veltri said. “There’s a lot of reform work happening at once.”

Here are five health care stories to watch in 2016.

The big players look to get bigger

From major insurers to hospitals to physician practices, there’s been a flurry of consolidation in health care, and regulators are expected to act on several big proposals in 2016.

Those include Anthem’s bid to buy Bloomfield-based Cigna, and Hartford-based Aetna’s proposed takeover of Humana. Each would affect state markets differently – Anthem and Cigna together covered nearly 64 percent of Connecticut’s private insurance customers in 2014, according to the Connecticut Insurance Department, while Aetna covered 18 percent and Humana doesn’t operate in the state. But both deals have potential implications for jobs in the state.

Those proposing to join forces say consolidation can reduce administrative costs and improve patient services. And they say the move toward fewer, larger entities is in line with federal policies that aim to shift how care is paid for and delivered and to slow the growth of health care costs.

The proposed insurer acquisitions have drawn pushback from critics who warn that they could reduce competition and that research suggests any savings wouldn’t be passed on to consumers. Critics of hospital consolidation point to research suggesting that increased market power can lead to higher prices.

Will regulators seek to block any of the proposals, let them proceed, or set conditions intended to control the impact of consolidation? Stay tuned.

Have you ever gotten medical care by video through your smartphone? You might someday – or even sometime soon. 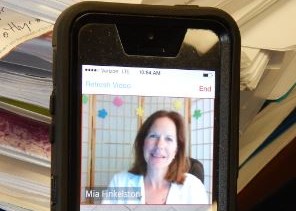 Dr. Mia Finkelston during a visit using LiveHealth Online, a form of telemedicine that allows the Maryland-based doctor to see patients across the country.

It’s known as telemedicine, or telehealth, and has a wide range of uses – from a patient consulting a doctor about a rash or persistent cough via video chat to nurses remotely monitoring the vital signs of heart failure patients who are at home, using devices that take and transmit measurements.

Experts predict it will continue to grow – both in the number of people who use it and the types of uses. The firm Tractica projected that the number of annual telehealth video sessions would rise from 19.7 million in 2014 to 158.4 million in 2020.

“The average number of visits has grown from eight a day to hundreds,” said John Jesser, general manager of LiveHealth Online, a telehealth company that provides services on behalf of Anthem. Still, most people don’t realize it’s possible, he said. Although 15 million Anthem customers have coverage for the service, Jesser said the percentage that have used it is in the single digits.

In 2016, LiveHealth Online plans to introduce a psychology service that allows people to connect through their smartphones to psychologists or social workers. And Anthem plans to make telehealth options for reaching nutritionists and lactation consultants available to pregnant women and new moms, Jesser said.

ConnectiCare also recently announced plans to partner with a telehealth company, MDLIVE, that allows patients to have medical consultations or mental health therapy sessions by phone or video using a computer or mobile device.

While proponents emphasize the technology’s potential to expand access to care and give patients an alternative to going to the emergency room or urgent care clinic if their doctor isn’t available, some physician groups have raised concerns about the potential for telemedicine to fragment care or interfere with the doctor-patient relationship.

“I think all physicians recognize that technology is incredibly powerful and it will have positive impact on health, and this is one place where it really can be done, and we’re crazy not to exploit it for what it can do in terms of reducing cost,” said Dr. David Emmel, a Wethersfield ophthalmologist and chairman of the Connecticut State Medical Society’s committee on legislation. “But we want to see it done in a way that doesn’t reduce quality.”

With the practice growing, Connecticut lawmakers this year passed a bill creating standards for telehealth that, among other things, prohibit doctors from using it to prescribe controlled substances. Telehealth providers must also give records of the “visit” to the patient’s primary care provider – if the patient gives consent – which Emmel said was a key piece.

The current state budget relies on state officials to find $93 million in as-yet-unidentified savings in executive branch agencies. Connecticut faces a likely shortfall of more than $300 million in the next fiscal year, and even bigger holes in the years after. 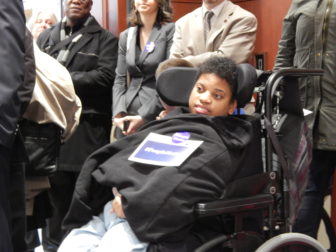 Proposed health and human service cuts to the state budget prompted many protests and press conferences, including this one at the state Capitol complex in April 2015.

Since health and human service programs account for just over a quarter of state spending, chances are they will be one potential target for savings as state lawmakers look to balance the budget.

One perennial target in recent years has been hospitals, although those cuts have drawn pushback from many legislators and others in recent months. Health care providers also worry about cuts in Medicaid payment rates. And advocates for mental health care remain concerned that state officials will look to cut mental health or substance abuse treatment funding, something Gov. Dannel P. Malloy has repeatedly proposed.

More than 18,000 parents of minor children are slated to lose coverage in the state’s Medicaid program, known as HUSKY, as of July 31 – the result of a budget cut passed in 2015. And advocates and some legislators are worried this will lead to more uninsured state residents.

The cut actually took effect in the summer of 2015, but federal law allows those with earned income to maintain an additional 12 months of coverage, giving the vast majority of the affected parents a one-year reprieve.

The Malloy administration proposed the cut based on the premise that parents losing access to HUSKY could instead sign up for private insurance through the state’s health insurance exchange, at prices deeply discounted by the federal government. But among those who lost coverage in 2015 (those without earned income), only a fraction – 167 out of 683 – actually bought coverage through the exchange, Access Health CT.

Advocates and some legislators expect an even bigger challenge convincing the larger group losing coverage to sign up – and pay – for private insurance.

“This is going to be a freaking nightmare for all of these individuals,” Rep. Catherine Abercrombie, D-Meriden, said during a November meeting of the council that oversees the state’s Medicaid program. “We need to make sure that we do this well.”

The push to pay for ‘value,’ not more care

There’s a big change brewing in health care, but it’s largely happening outside the view of patients, and even those centrally involved say the exact form it will take remains unclear. It’s a shift in how care is paid for and delivered – that is, away from a system in which health care providers get paid for each office visit or procedure to one in which their compensation is tied to quality and cost-efficiency.

If it sounds simple, the details of what’s required to actually achieve that – including what quality indicators matter most, how to reliably measure them, what incentives will lead to the changes policymakers want, and whether they will actually lower costs – are still largely a work in progress.

“We’re on the verge of embarking on some really profound changes,” Emmel said. “I don’t think anyone is looking at this very clearly and sees exactly how it’s all going to play out.”

Those models include “accountable care organizations” – networks of physicians, hospitals and other types of health care providers who can earn financial incentives if they control costs and meet quality measures for patients. But they’re still relatively new, and it’s unclear how they’ll evolve.

On the state level, there’s a reform effort known as the state innovation model that aims to create new standards for primary care practices that take on a larger role in coordinating care, to better link medical care to a wide range of factors that influence people’s health, and to create standards for alternative payment models. It also includes plans to try to identify if providers are skimping on necessary care to save money, a reflection of some advocates’ concerns about tying physician compensation to care costs.

It will still be in the planning stages in 2016, but Veltri, whose office leads the effort, said she hopes that by the end of the year, there will be “a process going where people are confident that we’re going to make the transformation that I think a lot of people agree we need to make in the delivery system.”