What does the Anthem-Cigna deal mean for consumers?

The announcement Friday that Anthem Inc. plans to buy Bloomfield-based Cigna Corp. comes amid a period of rapid consolidation in the health care industry that some observers have likened to an arms race.

Hospitals – seeking, among other things, greater leverage in negotiating with insurers – have increasingly been joining larger systems, while the insurance industry – already concentrated in many states – is poised to undergo even more consolidation.

Where does that leave consumers?

Experts say potential benefits of consolidation include economies of scale that can lead to reduced costs, while potential drawbacks include reduced competition that could have the opposite effect on prices.

The Anthem-Cigna deal follows the announcement earlier this month that Hartford-based Aetna had reached an agreement to buy Humana. Both deals must be reviewed by federal and state regulators in what could be lengthy processes. Anthem and Cigna said Friday they expect the acquisition to close in the second half of 2016.

“It in some sense makes sense to have companies come together, but obviously we need to make sure there’s enough competition in the marketplace and that people have choices,” Connecticut Insurance Commissioner Katharine L. Wade said in an interview earlier this week. “As things present, we’ll all be looking very closely at this.”

Anthem, Cigna and the Connecticut market

In announcing the agreement Friday, Anthem and Cigna executives emphasized the potential for the combined company to drive changes in health care delivery, manage the cost of care and offer affordable insurance. The companies said they anticipated $2 billion in “synergies” – savings – within two years of closing the deal.

Nationally, Anthem has 38.5 million members, while Cigna has 14.5 million.

But the two companies overlap only in certain parts of the market. Cigna has minimal presence in the state’s individual market – it currently has 317 policies in effect – and does not sell plans through the state’s small-group market, while Anthem is a leading carrier in both markets.

Will it affect prices?

While the companies emphasized affordability, some critics raised concerns that growing market power could lead to increased prices for consumers.

“The combined effect of these mergers will reduce the number of large, national health insurance providers from five to three – limiting access to affordable health care and raising premiums,” U.S. Sen. Richard Blumenthal, D-Conn., said in a statement. “These mergers must be seriously scrutinized to ensure that consumers and health care providers are protected from mega-insurer market power abuse.”

Some research indicates that premiums have gone up after past insurance company consolidation. But it’s not clear how applicable that research is to current conditions because of the significant changes created by the federal health law, said Sabrina Corlette, senior research fellow and project director at the Center on Health Insurance Reforms at Georgetown University’s Health Policy Institute.

“I think there’s really no good current research out there that helps us say definitively what might happen,” she said.

Corlette said the impact could vary by market. Because Humana has a large presence in Medicare plans, for example, she said that market could be particularly affected by Aetna’s acquisition of the company, while the product of an Anthem-Cigna transaction could be particularly strong in the employer market.

Consolidation can give insurers more leverage in negotiating what they will pay health care providers for care, which is a major factor in the cost of insurance.

In some areas, dominant hospital systems can now drive price negotiations, since insurers can’t afford to not have those hospitals in their networks, experts said.

In theory, consolidation among insurers could counter the bargaining power that dominant hospital systems have, said John Aloysius Cogan Jr., a professor at the UConn School of Law and a former Rhode Island insurance regulator. But, he added, that’s not a foregone conclusion, and hasn’t been the case in some markets with one dominant insurer.

Cogan noted that hospital-insurer negotiations are among the few areas of health care that are not regulated.

While the number of major national insurers could drop if the Aetna and Anthem purchases go through, Wadleigh said Connecticut’s insurance industry is “pretty diverse.” Massachusetts-based Harvard Pilgrim Health Care recently entered the market, while HealthyCT began operating in 2014. Farmington-based ConnectiCare now has the most customers in the state’s individual market.

But Wadleigh said he’s been hearing that across the country, regional insurers are getting nervous about their ability to remain competitive. “Those are some of the things that I will always be on the lookout for to make sure that all of our carriers have some sort of even playing field so they can represent all of our customers equally,” he said.

Connecticut’s insurance department will review the proposed transaction and evaluate, among other things, whether it would substantially reduce competition in any line of business. The deal is also subject to approval by the U.S. Department of Justice and Federal Trade Commission.

Wade, Connecticut’s commissioner, worked for Cigna for 21 years and her husband is an attorney at the company. Asked earlier this week if she would participate in any regulatory action related to the company, Wade said she would determine that “when the facts of the situation present itself.” 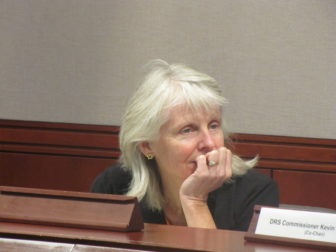 For Connecticut, there’s another consideration: Cigna employs thousands of people in the state. The company made Bloomfield its corporate home in 2011 as part of a deal with the state worth between $47 million and $71 million. In exchange for tax credits, a loan and job training grants, Cigna promised to create at least 200 jobs within two years, maintain its 3,883 Connecticut jobs and make at least $100 million in technology and real-estate investments.

Among other things, the agreement requires Cigna to maintain its Bloomfield and Windsor operations for at least 10 years. If the company were to relocate those operations outside the state during that period, it would have to repay all tax credits and funding provided by the state.

Economic and Community Development Commissioner Catherine Smith said Friday that her agency would be in a “wait and see mode” while the two companies determine how to integrate, but hopes to talk to them when they’re ready about the “benefits of being in the state.” Smith said the state has the advantage of having a “deep pool of talent” in the industry as well as legal, accounting and actuarial firms with expertise in insurance. And she noted that Anthem and Cigna don’t serve overlapping customers.

“We’re optimistic they need a lot of those employees, that they will end up retaining a large footprint here,” she said.

Does it give her pause to hear the companies forecasting $2 billion in potential savings from the deal?

“It is my job to worry about these things, so of course it does give you pause,” Smith said. “But on the other hand, I think there’s just a lot of strengths that we can build upon in the state.”