Malloy finds even polite questions have no easy answers 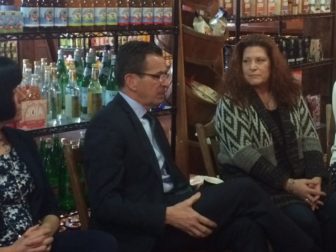 Wethersfield — A harder test comes Thursday night in Stamford when Gov. Dannel P. Malloy faces an unfiltered audience at the first of his town hall meetings. But even in a small invitation-only event here Tuesday, he heard concerns about the depth of his spending cuts.

Malloy is embracing the need to constrain spending, acknowledging now what he resisted as a candidate for re-election in 2014: The U.S. is in an extended period of slow growth after the Great Recession, requiring painful choices.

He said this while seated next to Patti Silva, who hopes services for her 17-year-old daughter, who has an intellectual disability and hearing loss, remain one of those core responsibilities.

“Every year, we have to go before the Appropriations Committee public hearings and pretty much get down on our knees and beg that cuts are not made,” Silva told him. “I would just ask on behalf of our families that you consider that and keep that in mind and encourage everyone to work together so that we don’t have to keep coming forward and baring our souls.”

The Malloy administration’s relationship with the families of children and adults served by the state Department of Developmental Services is often strained by the department’s vulnerability to spending cuts. Most of its services are considered discretionary under federal law, not entitlements.

The governor offered no real assurances for Silva. He talked about the need to find “best practices” and apply them to government. “Government has never specialized in finding the least expensive way to fund services,” he said.

His administration has proposed a major change in budgeting: A shift away from detailed line items – which the legislature uses to shape policy and guarantee certain services are funded – to block grants for broad categories of spending at the discretion of the administration.

Fonfara represents a district heavily reliant on state government. As home to state government, major hospitals and universities, much of Hartford’s real estate is exempt from property taxes. He said he hopes Malloy sticks to a tight bottom line, but the legislature is unlikely to cede fiscal authority by eliminating line items.

Malloy is aware of the strong resistance to the block-grant concept, even if it might shift inevitable anger over spending cuts away from legislators to his administration.

“We’re open to discussions. The reality is the budget has to be cut very substantially,” Malloy told The Mirror. “We’re not going to spend more money. If somebody has a better idea on how to do that, that’s fine. But I’ve sat with them across the table, Republicans and Democrats, trying to get line-item cuts made, not successfully.”

Malloy has a lot of work ahead on adopting a budget before the constitutional adjournment deadline of midnight May 4, but he seems to have accomplished one task: Lowering expectations of what can delivered by state government.

After his event in Wethersfield, the Connecticut Coalition Against Domestic Violence released a study at the Legislative Office Building that shows increased demands for shelter beds, despite flat funding since 2009.

The state’s network of 16 shelters, which have 227 beds, and other assistance offered by 18 private agencies, is funded by state dollars and private grants and philanthropy. The shelters are filled to capacity nearly year-round.

“We’re not here to press for more funding, because given what we know about the state budget and what’s occurring with that, that really wouldn’t be a reasonable ask at this point,” said Karen Jarmoc, the chief executive officer of the coalition. “When things do improve in our state, there is this opportunity to take a look at this data and make some decisions around policy priorities related to helping victims and their families.”

The first of the governor’s public forums is Thursday from 7 to 8 p.m. at the University of Connecticut branch campus in Stamford. A sign-up sheet for people wishing to ask questions on the budget or any other issue will be available at 6:30 p.m.