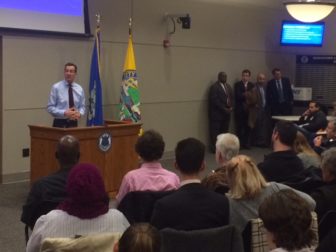 Middletown – Gov. Dannel P. Malloy was in the unfamiliar position Tuesday night of trying to persuade an audience that Connecticut’s glass is half-empty, its economic recovery rests too heavily on low-wage jobs and its citizens need to expect less from their government.

In the second of the town hall forums he’s held since proposing an austerity budget on Feb. 3, the Democratic governor defended his plan to cut spending and his refusal to raise taxes as driven by economic realities.

“Our recovery in low-paying jobs far exceeds the number of low-paying jobs we lost in the Great Recession,” Malloy said, noting that the recovery of high-paying jobs is lagging. “That’s where we are today, folks. And you can’t wish that away.”

Malloy saw the modest stirrings of opposition from state employees, who heard him warn two weeks ago that he intends to shrink the state workforce through attrition and, most likely, layoffs.

“How can you talk about deep cuts in services to Connecticut’s families and layoffs to the service providers when really you will be balancing the budget on the backs of state employees?” asked Karen Romero, an associate insurance examiner at the Department of Insurance.

Her question was applauded.

Malloy said he made clear in his State of the State speech that “our predicament” is not the fault of state employees.

“But there is a certain reality,” he said. “The nation’s gross national product last quarter grew by .7 percent – .7 percent. And there has been volatility in the stock market going back to June of last year. And that revenue is falling, not rising. That’s the reality.”

The only alternative would be to raise taxes, which he says would be ill-advised after two major tax increases in five years – even if a tax increase were politically feasible in a legislative election year.

No one contradicted Malloy when he said, “I don’t think there is a desire to raise taxes at the State Capitol.”

The governor left no doubt he has embraced Republican talking points from years past, including the danger of driving away wealthy retirees, who tend to be mobile. He downplayed Connecticut’s relative advantage to New York on taxes, saying that New York has a higher top rate, but it only applies to a certain level of income.

“In Connecticut, we take the highest rate and put it back to dollar one,” he said. “We have to be competitive with other states.”

Most, if not all the state employees who spoke were members of an AFT-Connecticut affiliate, A & R, that represents professional employees. Other larger unions have sent members to observe the forums without coordinating messaging.

A string of speakers prefaced their complaints or concerns with compliments.

A woman who works with the homeless told Malloy his housing policies have brought Connecticut close to the elimination of chronic homelessness. She sought assurances he was not planning a retreat.

Ben Martin of 350CT challenged Malloy on his call for a wider I-95 as part of his long-range transportation priorities, along with improved mass transit. The group’s name is a reference to 350 parts per million, the safe upper limit for carbon dioxide in the atmosphere. Current levels have topped 390.

“You have shown a dedication to working on climate change and the environment, but this seems kind of like an about-face when you cut funding to the Department of Energy and Environmental Protection and then give funding to expand 95, which will cause pollution,” Martin said.

Malloy replied his administration is putting money faster into rail and other mass transit than highway expansion.

His next forum is next Tuesday at 7 p.m. at Wilbur Cross High School in New Haven.