A governor’s search for fiscal ‘balance’ on the road 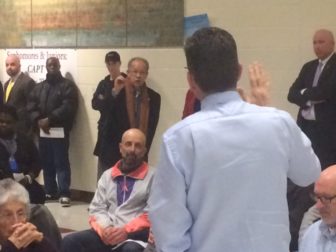 New Haven – One woman wants to save the fast-emptying Southbury Training School, where her brother has lived since 1977. A state employee urged higher taxes on the rich. A city educator was angry about any funding of charter schools. One man told him to legalize cannabis.

Gov. Dannel P. Malloy was alternately sympathetic, defiant, understanding, annoyed and, occasionally, amused as he fielded queries Tuesday night in the expansive lobby of Wilbur Cross High School that ranged widely, yet usually landed in the vicinity of the state’s troubled finances.

In a city that overwhelmingly voted for him, the Democratic governor heard concerns at his third town hall forum about what spending cuts might mean for a disabled brother’s home, an advocate’s clients, a woman’s job. Malloy’s proposed budget promises deep cuts and job losses, through attrition and layoffs.

On Sunday night, Malloy was seated at a table with the president at the White House, where he is appreciated for pushing criminal justice reforms the Justice Department would like to implement on a broader scale.

Two nights later, he faced unhappy friends here in the sixth year of a fiscal crisis turned chronic, something to be managed, not resolved. Both governor and audience seemed weary, each able to make their points, if unable to convince the other to change their view of what is possible.

“I voted for you. Not only did I vote for you, but I knocked on countless doors, made numerous phone calls and I spoke to almost 5,000 people, at least 5,000 people personally on your behalf,” said Kimberly Rice of New Haven, who works for the Department of Social Services in Bridgeport. “I did that because I believed, I truly believed, that you were the best man for the job.”

Malloy waited for the pivot, the claim of betrayal.

“You have a choice to make,” Rice told the governor. “I’m here tonight, because I‘m concerned. And the concern is you appear to be abandoning your policies and adopting an austerity budget, and that concerns me. What we’re doing in effect by doing that is abandoning the people who are most in need. You’re talking about possibly defunding programs that need it the most, laying off workers who are on the front lines to provide those services.”

She told Malloy a better option is to raise taxes on Connecticut’s wealthiest citizens. The audience applauded, even if many of them probably knew the legislature had little appetite for a second tax increase in as many years, not when every seat is up for election this fall.

“I appreciate it. And let me assure you, I am not abandoning my principles and what I’ve stood for,” said Malloy, who presided over major tax increases in 2011 and 2015, the first year of each of his two terms. “Obviously, I took a giant step in 2011 and raised taxes, when our state faced a $7 billion deficit over a two-year period of time, a $3.6 billion deficit in year one.”

But Malloy said things are different. Growth since the end of the recession in 2010 is too slow to support government as it exists today, and another tax increase would leave Connecticut at a competitive disadvantage with neighboring states.

“Finding the right balance is really important,” he said. “What we can see, and what we don’t want to see in Connecticut, is driving our citizenry in any economic grouping out of the state.”

Rice persisted, telling the governor that billionaires are paying less in taxes, probably a historic low, but she added, “I do understand that you are in somewhat of a bind. And I appreciate that.”

Malloy said federal taxes on the wealthy are relatively low, but Connecticut did raise its top rate, even if progressives complain that the burden, as measured as a share of family income, still is disproportionately heavy on the poor and middle class.

A member of the Better Choices for Connecticut coalition greeted people at the door, handing out one-page sheets topped by a quote form Martin Luther King Jr.: “We must never adjust ourselves to economic conditions that take necessities from the many to give luxuries to the few.”

Malloy suggested that not all inequities in the tax burden can or should be addressed in Connecticut. “It’s not at a historic low,” he said of the state and local tax burden on the wealthy. “We’ve increased that, and we’ve increased it substantially.”

He talked repeatedly of a search for a balance.

“I’ve got to make sure this state is not just healthy in the next three months, six months or 12 months, but actually remains healthy for the next six years, 12 years, 20 years,” Malloy said. “In a world where income is not going up for state government and local government, we can’t simply do things exactly the way we’ve been in the past.”

Judy Atwood of Shelton told Malloy her parents moved the family from Long Island to Connecticut in 1977 because of the care available to her intellectually disabled brother at the Southbury Training School. Under the terms of a consent decree, the state has moved most residents to group homes and other community settings.

She told Malloy that Southbury remains an important state resource to people like her brother, who have lived there nearly 40 years.

“I know you visited recently and I appreciated your comments after you visited,” she said. “It’s a wonderful place for him to live. And I hope you will continue to look at ways of keeping Southbury Training School open. The cost of closing and moving the residents is high. There are many vulnerable residents, who really won’t have a great placement in the community.”

Malloy told her the die is cast for Southbury. Its closing is matter of when, not if. The school was built for thousands and now is about 90 percent empty – and shrinking fast.

The per resident cost is now about $240,000 a year, a number certain to rise as the population drops.

“I’m just trying to find the right balance,” he said.

The sharpest exchange of the night was between Malloy and Peter Wilson, an educator in the New Haven public schools who objects to the state’s support of charter schools.

“Public schools in the United States have made this country great,” Wilson said in a lengthy preamble to a promised question that did not come quickly enough for the governor.

Wilson replied that he wanted to know why the state funded charter schools, when those dollars could be used in public schools?

Malloy told him many urban schools failed their students, and charter schools were an experiment to see if there was a better way.

“We failed the better part of two generations of kids. That’s what we did,” Malloy said. “And you’re arguing that we should take an experiment …”

“They don’t do business the same way public schools do business,” Wilson said.

Malloy said no one should be afraid of experimentation in government.

The governor said New Haven’s other schools have not suffered for the money that’s gone to charters.

“Let me ask you a question,” Malloy told Wilson. “Which governor of the last three has put more money into education than other governors.”