A lesson on crime, redemption and trees at Yale 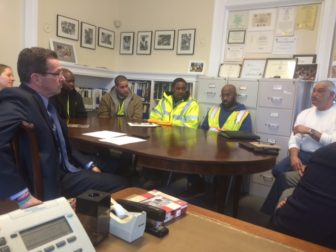 New Haven – David Pabon rises early to catch a 6:30 a.m. bus from Meriden, often a 90-minute trip, to prune trees in winter and plant them in summer, wrestling 300-pound root balls into the ground, all for an hourly wage of $10.10.

The crew boss is a petite Yalie named Katie Beechem, an Ultimate Frisbee player and CrossFit athlete who has done research in plant molecular biology. The rest of the crew are ex-cons, guys like the 27-year-old Pabon.

It’s all a bit movie-of-the-weekish, mixing ex-cons, the Ivy League, and a goal of reforesting a city famously hit hard by Dutch Elm disease. But it’s been working for a half dozen years now, boasting a high survival rate for the trees and a low recidivism rate for the guys.

Pabon and three co-workers explained the program Wednesday to Gov. Dannel P. Malloy, who has made criminal justice reform and second chances for offenders a priority of his second term. Malloy told them every program up for state funding has to prove its worth.

The labor is provided by Emerge, a non-profit group that arranges transitional work and counseling for offenders after their release from prison. The client is URI, the Urban Resources Initiative at the Yale School of Forestry and Environmental Studies.

A partner is the city of New Haven. It hires URI to plant and prune trees in city parks and along streets. Neighborhood Housing Services, which also uses labor from Emerge, was contracted to repair and sometimes demolish blighted housing. The men get work, the city gets services, and Emerge gets funding.

Emerge is run by Dan Jusino, who told Malloy that the work is the “pleasant part.” The men do labor for 24 hours a week, spending the rest of the time in classes on literacy, parenting and other re-entry skills, and in group sessions, including “real talk” on Mondays.

“We really blackmail these guys, because they come in like every offender, they need a job. That’s all they want,” Jusino said. “To go on payroll, they have to take care of other things.”

The men say those “other things” ran the gamut. The issues are tackled in peer sessions that are blunt, but safe.

“You see, a lot of dudes like myself, we don’t have people that got our back like that,” said William Tisdale, 47, who says he used to make a living selling drugs. “I got grandkids. I gotta be there for my grandkids. I thank God for Emerge. It changed my life.”

“They come here for jobs,” Jusino said. “Governor, I try to make them citizens.”

The Yale-Emerge connection came in 2010, when John DeStefano, then the mayor, realized that the number of trees URI was planting in a weekend program with city teens was not keeping up with the rate at which trees were coming down. Planting more trees would require more than young volunteers.

“Our work is around nature, around the environment, but we’ve always been looking to find ways to make our work meaningful for the human community,” said Colleen Murphy-Dunning, director of the Urban Resource Initiative.

URI’s board suggested looking into a program that could employ and teach ex-offenders, and the partnership was struck with Emerge. One hundred men have come through the program, and the men and teens have planted 4,000 trees, Murphy-Dunning said.

Malloy chatted with the men around a table in Murphy-Dunning’s office on the first floor of an old mansion Yale now uses for offices. It sits on a rise overlooking Prospect Street, which is lined by mature scarlet oaks. 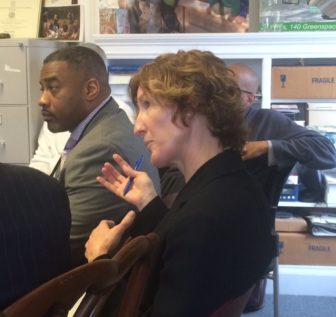 A catalog in her office lists 50 species URI uses. Half the city’s inventory of trees are maples and oaks, and Yale takes care to promote diversity, mindful of how disease can wipe a species, as happened to the city’s elms.

The governor was more curious about the men than the trees. He asked if drugs or alcohol played a role in their going to prison. The answers were terse.

Participants are tested for drugs. After the Super Bowl, four men were bounced from the work crews. Jusino said they are not barred from the program, but they have to earn their way back to one of the jobs for URI or Neighborhood Housing Services.

“They have to set up a strategy with one of the program directors and stick to it,” Jusino said. “We don’t want to lose them.”

Michael Carter, the chief administrative officer for Mayor Toni Harp, told Malloy that the city was looking at other jobs for men going through Emerge, such as graffiti clearance and snow removal.

“Are you getting any blowback from other employees?” Malloy asked.

Carter said he would like to hire the men to full-time jobs. Jusino said 78 percent of the men are eventually hired for full-time jobs, often by landscapers and other contractors, and there is a two-year retention rate of 76 percent.

Malloy thanked the men for their time. They followed him into the entrance foyer and posed for pictures. They gathered around the governor to shake his hand. Malloy lowered his voice and said something about unsolicited advice, if they cared to hear it.

He gave them a quick critique on how they had interacted during their 30-minute meeting, offering praise and suggestions.

“You guys, make more eye contact,” Malloy said. He looked at each man.

Malloy has met with inmates and ex-offenders at prisons and in community settings, including three trips to talk to inmates selected for new community reintegration centers, the last stop before their release.

The events are promotional for his second-chance policies. He calls them educational, a way to make inmates seen as people trying to rebound from mistakes. For him, in a time when fiscal challenges limit the reach of government, there also is value in seeing a public policy produce results.