A bittersweet day for Second Chances in New Haven 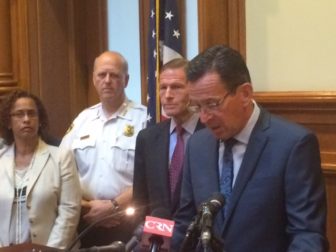 Lawlor already had been briefed Wednesday morning. Maurice Richardson, 19, was found shot to death the previous night on Davenport Avenue in the Hill neighborhood. The question was whether his death would lead to others, or would the cycle be short-circuited.

Lawlor and Esserman stood in the renovated atrium of Old City Hall, where Gov. Dannel P. Malloy, U.S. Sen. Richard Blumenthal, Mayor Toni Harp and others soon would gather to announce the receipt of six grants worth $2.3 million from the U.S. Department of Justice under the federal Second Chance Act.

Crime is down. Arrests are down. The prison population is falling. Connecticut has raised the age for trying teens as adults from 16 to 18. The prison system has an entire prison dedicated to preparing inmates for re-entry to society.

“We are being smart about crime, and it is working,” Malloy said.

Malloy said the state intends to find out how low it can drive crime and recidivism. The biggest grant will provide $1 million to Project Fresh Start of New Haven, a well-established prison re-entry program, in partnership with the Department of Correction, with research support from the University of New Haven’s Henry C. Lee College of Criminal Justice and Forensic Sciences.

“If we do a better job in reducing recidivism, we make those communities stronger day in and day out,” Malloy said.

The goal is to cut the recidivism rate by half over five years by working intensely with incarcerated New Haven residents for a full year prior to their release. A grant of $99,060 will pay for the Department of Correction to develop a strategic plan for cutting recidivism statewide, also with research support from the same university.

Other grants will fund planning for the increased community supervision of juveniles, help for fathers trying to re-establish a relationship with their children after prison, support for children with an incarcerated parent, and a Yale study of the connection between health care and recidivism.

Connecticut is receiving more than four percent of the $53 million awarded in this round of grants.

“The fact of the matter is that Connecticut is esteemed and respected” for its criminal justice reforms and research, Blumenthal said. “Nothing succeeds like success. These programs are succeeding, and they’ve attracted bipartisan support.”

Rep. Toni Walker, D-New Haven, a social worker by training and a long-time advocate of criminal-justice reform, thanked Malloy for the progress of recent years. She reminded the audience there is more work to do, more young people to reach.

She had worked at an adult education center with Henderson, the young man shot the previous night.

A one-time gang banger with the street name of “Juneboy” and unlikely given name of William Outlaw III stood near the back of the crowd, listening. At 6-foot-8 and more than 300 pounds, he was hard to miss.

He is employed by Easter Seals Goodwill Industries doing community outreach, trying to prevent violence. He was in the Hill neighborhood the night before, trying to calm residents angry that Henderson lay dead on the street for hours while police collected evidence.

“He had been on the ground for two hours, 15 minutes by the time I got there,” said Outlaw, a huge man with a soft voice. “People were upset. They said, ‘You got him on the ground like a dog.’ ”

Outlaw told them no disrespect was intended, that police were trying to collect evidence before the body was moved. He said he and other outreach workers would be back on the street, dissuading other young men from revenge.