Student test scores will not be required to be factored in teacher evaluations next school year as planned, members of the state panel that oversees the teacher rating system voted Wednesday.

The State Board of Education is expected to vote on this one-year delay at its April 6 meeting, and typically agrees with its advisory panel. 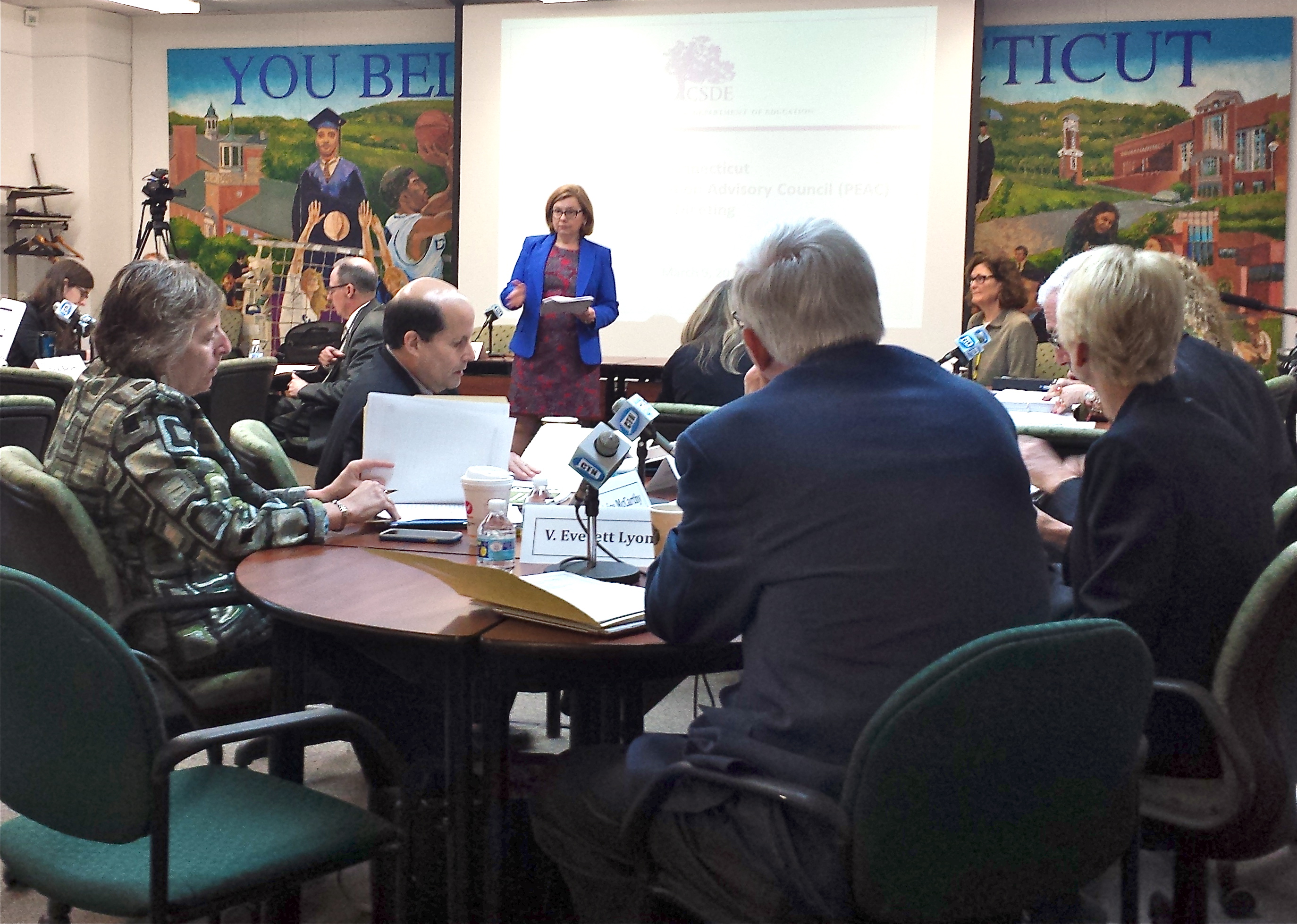 This about-face by the Performance Evaluation Advisory Council comes as controversy surrounding the role of state exams in grading teachers increases at the state Capitol. Facing pressure form the state’s teachers’ unions, state legislators are considering legislation that would bar using the state exams for teacher ratings.

“This has emerged as the hot-button issue,” Connecticut Education Commissioner Dianna Wentzell told the panel Wednesday. “One more year of not requiring it would give us plenty of time to study.”

The panel – whose members represent superintendents, school boards, principals, teachers’ unions, regional school systems and the education department – agreed with the commissioner, and voted 8-1 to delay linking the test scores for one year.

“I think this is a reasonable approach for us to take today,” said Patrice McCarthy, general counsel for the Connecticut Association of Boards of Education. “It’s going to lead to better decisions.”

“Let’s give ourselves time,” said Joe Cirasuolo, the leader of the Connecticut Association of Public School Superintendents.

This panel voted in 2012 to include test scores in educator evaluations at a time when the U.S. Department of Education was requiring it in order for the state to receive a waiver from the requirements of the federal No Child Left Behind Act. This evaluation system was also one of the centerpieces of Gov. Dannel P. Malloy’s 2012 education reforms.

But now, after a change in federal law this past winter, the federal government is prohibited from requiring that evaluations be linked to tests – a change state teachers’ union officials were hoping would lead the state to reverse course and no longer require the linkage.

The advisory panel decided, however, it would be best to put off that decision until more research could be done.

“Having a year to study it and look at it does make sense,” said David Cicarella, the president of the New Haven Federation of Teachers.

“It’s like a stay of execution versus a pardon,” said Mark Waxenberg, the leader of the Connecticut Education Association, the state’s largest teachers’ union. “It’s like kicking the can down the road. We will be here next year arguing the same point.”

This is the second time the panel has voted to push back the date for linking test scores to evaluations. When the panel first approved the new statewide evaluation system, the link was scheduled to begin this school year.

The Malloy administration is supportive of putting off this decision for another year.

“We appreciate PEAC’s prudent step to provide predictability to teachers and leaders for the coming school year.  We look forward to PEACs long-term recommendations to refine the guidelines for the evaluation and support system later this year,” said Devon Puglia, a spokesman for the governor.

The current state-mandated teacher evaluation system requires that at least one-quarter of a teacher’s rating be linked to the statewide standardized exam. The remaining portion of the grade is tied to classroom observations (40 percent), anonymous parent or peer surveys (10 percent), carrying out teaching objectives or another standardized test (22.5 percent), and schoolwide test scores or student surveys (5 percent).

Teacher ratings, which largely do not include the state test scores, have been drastically skewed toward the higher categories. Last school year 546 teachers (1 percent of the state’s nearly 50,000 teachers) were evaluated as either “below standard” or “developing,” the two lowest ratings. Nearly identical results occurred in the 2013-14 school year. The vast majority received ratings of “proficient” or “exemplary.”

(See how teachers in your school district fared over the last two school years below).