It’s been six years since a teen died in a school bus crash in Hartford and legislators responded by overwhelmingly approving a new tax incentive to encourage purchasing school buses with seat belts. The cost of the tax incentive was covered by raising the fee drivers pay to reinstate a suspended license.

Students step off a school bus in Norwich.

The fee increase proved to be a successful revenue stream, bringing in $9 million since 2010, according to the legislature’s Office of Fiscal Analysis. Each year, the fund receives about $2 million, and as of January 2016, it had a balance of $1.3 million. That means about $7.7 million has been spent over the last six years.

But not a single dollar of it was spent on fitting new school buses with seat belts.

Instead, the fund has been tapped twice to help the state close budget deficits – $4.7 million was taken in December 2012 and $3 million in June 2015.

The reasons the funds remained unused may include scant promotion by the Department of Motor Vehicles, which runs the program, and concerns about cost and safety among schools officials.

The law states that applications to take advantage of the program must come from school districts, which in turn work with bus companies buying the buses. “No one has submitted an application,” said DMV spokesman Bill Seymour.

Seymour said the DMV has relied on the initial publicity the program received when Republican Gov. M. Jodi Rell signed the bill into law and has directed its school bus inspection unit to inform bus companies about the program and others available to them.

The DMV has not communicated with school districts about the opportunity, Seymour said, adding the DMV believes communicating with the bus companies is “sufficient publicity.”

The program was created in the spring of 2010 to encourage purchasing school buses with so-called “shoulder-and-lap” seat belts. The program cuts the sales tax on the purchase of buses with these three-point seat belts in half – from 6 percent to 3 percent. Legislators hoped at the time this would be enough to offset “a majority” of the cost of the seat belts, which was estimated then to be $8,500 per bus.

Advocates sold legislators on increasing the cost of reinstating a suspended driver’s license from $125 to $175 dollars, saying it was a small price to pay for the safety of children.

“We fully believe our son would have been with us today had there been seat belts,” Pratik Parikh, the father of Vikas Parikh, a Rocky Hill teen who died in a crash while on a field trip, told a crowded room at the state Capitol complex in 2010. “Before you vote yes or no, just think about if it had been your son.”

Rep. Tony Guerrera, the co-chairman of the legislature’s Transportation Committee, said at the time that “a lot of schools are going to take advantage of this.” 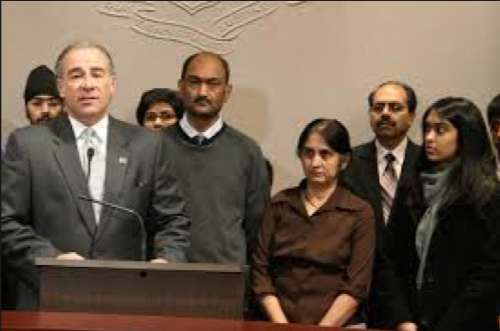 Rep. Tony Guerrera, left, is flanked by family and friends of the teen who died in 2010 in a school bus crash.

Now, six years after passing a fee increase that did not result in helping to fit a single new school bus with seat belts, the program is set to expire at the end of 2017. This leaves any interested school district a limited amount of time to pursue the opportunity.

The $50 fee increase on reinstating suspended driver’s licenses is permanent, however.

Legislators are now considering a bill that would mandate three-point seat belts in all new school buses but have provided no funding mechanism to pay for it. It made it out of the Transportation Committee earlier this week.

Twenty-three similar bills failed to make it out of the Transportation Committee through 2010, but the death of Parikh proved to be the impetus needed to pass a law. Guerrera had been pushing for a three-point seat belt mandate at least since 2010, but settled for the incentive program when it became clear the legislature had no interest in establishing it as a requirement.

He said during an interview this week that this year’s legislation is a response to the lack of progress since then.

“The sad part is, the money was there and that, as you know, again, as crisis occurs and all that, the funding wasn’t getting used, and, you know, again, there’s a pot of money for us to grab to help minimize the deficit and so forth,” Guerrera said.

School officials have expressed concern about the cost of purchasing new school buses with seat belts. While legislators estimated the additional cost to be about $8,500 per bus in 2010, one local school official who testified on this year’s legislation said it could be significantly more than that.

“The reality of this bill is that it would be very costly,” Danielle Batchelder, a liaison from the Connecticut Association of School Business Officials, testified during a Transportation Committee public hearing on March 2. “The average cost to retrofit a bus with seat belts is $15,000. The cost to add seat belts to a new fleet purchase is $10,000 to $12,000 a bus.”

Sharon Bruce, executive director of the school business officials association, said legislators never mentioned the existing program during the public hearing and questioned the amount of money the partial sales tax exemption would save.

In addition, Batchelder said in her testimony, there are lingering questions about whether seat belts would make school buses safer for children. She cited a 2011 study from the National Highway Traffic Safety Administration that found “requiring seat belts on large school buses is likely to have the effect of increasing fatalities related to school transportation.”

Guerrera would not assign blame to anyone for the failure of the present program to encourage installation of seat belts.

“To put blame on anyone, I don’t think that’s a fair assessment, in my opinion,” Guerrera said. “Again, you have to have a will from the municipalities to implement this, and I think municipalities sometimes feel as though it’s a very difficult thing to do in regard for how you properly seatbelt a child in a school bus.”