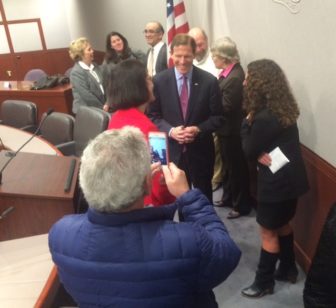 Big food’s surrender to tiny Vermont on the issue of labeling foods produced with genetically modified organisms is prompting activists to make a late-session push to amend Connecticut’s labeling law.

In 2013, Connecticut became the first state to pass a law requiring GMO labeling, but the requirement never took effect because of a trigger provision: four other states with a combined population of 20 million first had to adopt a similar standard.

The trigger was a compromise intended to ensure that the state would not stand alone. Opponents contended that a single-state labeling standard would either drive some products off the shelves in Connecticut or force higher prices to pay for a special label.

A movement comes of age in Connecticut over GMO labeling

With Congress failing to pass a law pre-empting states from setting GMO labeling standards, some of the nation’s biggest food producers announced they would change their labels on their entire product lines to abide by a Vermont law that takes effect July 1.

Campbell Soup, General Mills, Kellogg, ConAgra Foods and Mars all intend to change their labels to satisfy Vermont, the nation’s second-smallest consumer market, reasoning it was best to have consistent labeling – even if that meant bowing to a small state.

On Friday, Tara Cook-Littman of Fairfield, a self-described PTA mom and food blogger who founded GMO Free CT, said big food’s reaction to Vermont’s law makes the case that Connecticut can repeal the trigger without fear of driving up food prices or losing products.

“Those concerns have been completely debunked,” she said. “We actually think it’s time for Connecticut to move forward.”

The deadline has expired for filing new legislation, but a pending bill that would remove the trigger for children’s foods could be amended to require Connecticut to implement its labeling law without waiting for other states, she said.

Cook-Littman and U.S. Sen. Richard Blumenthal, a Democrat who helped block the federal law that would have pre-empted state labeling requirements, said they would support a federal standard similar to the ones adopted by state legislatures in Vermont and Connecticut.

Paul R. Pescatello, who chairs the Bioscience Growth Council of the Connecticut Business and Industry Association and is president of the New England Biotechnology Association, said the anti-GMO movement is based on unfounded fears, not science.

The label is unnecessary and its presence suggests that genetically modified organisms are a danger to be disclosed, he said. The vast majority of corn, soy beans and sugar beets, three ingredients found in many processed foods, have been genetically engineered.

“It implies something that isn’t true, that the end product you are eating is somehow different,” he said. “This is a first-world problem to satisfy the Whole Foods consumer market.”

Pescatello said the movement could be dangerous if the labeling discourages genetic engineering that can help produce plants for the developing world that have higher yields and are resistant to drought and pests.

Some environmental and fishing groups are now suing the Food and Drug Administration over its approval in November of genetically engineered, or GE salmon, for sale to consumers. It is the first genetically modified animal cleared for sale as food. 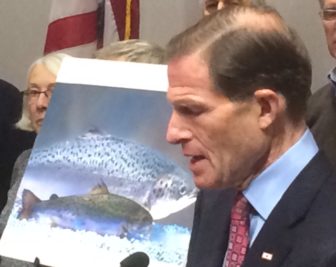 Blumenthal in November with a picture of a genetically engineered salmon, top, and a wild salmon.

AquaBounty Technologies of Massachusetts used genes from a Pacific Chinook salmon and an ocean eelpout to breed an Atlantic salmon that grows twice as fast as other salmon. It is intended to be grown in inland fish farms to minimize the chances of release into the wild.

The FDA says the fish “is as safe to eat and as nutritious as food from other non-GE Atlantic salmon and that there are no biologically relevant differences in the nutritional profile of AquAdvantage Salmon compared to that of other farm-raised Atlantic salmon.”

But Blumenthal criticized its decision to allow the fish on the market without special labeling.

“Consumers have a right to know whether their food has been genetically engineered so they can make informed choices about what they eat and purchase,” Blumenthal said. “FDA’s action is a major step backward for transparency, making it all the more urgent for Congress to act now to require clear, consistent and mandatory labeling of genetically engineered foods.”