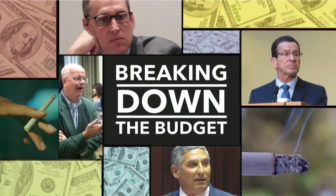 The administration, which issued 165 notices Monday and Tuesday combined, served 34 more pink slips Wednesday to clerical workers at the Department of Social Services.

The A&R union represents a diverse group that includes accountants, planners, revenue agents, forensic investigators and other professionals across many state departments and agencies.

The governor has said he needs to reduce the state workforce by about 2,500 to help balance the budget for the fiscal year that begins July 1. The administration anticipates that about 650 of those position vacancies will be covered through retirements and a job freeze, and the remainder achieved through layoffs.

The administration was expected to release an update on layoff notices issued at the end of business Wednesday.

“Because the administration is not communicating properly with us, we do not have an accurate count” of layoff notices, said Larry Dorman, spokesman for Council 4 of the American Federation of State, County and Municipal Employees.

Council 4, which is one of the largest state employee worker unions, has accused the administration of violating members’ contractual rights in two ways.

Affected unions are supposed to be given an opportunity to meet the administration before layoff notices are released and be granted an opportunity to offer alternatives. The union insists this requirement has not been not met.

Secondly, the umbrella contract that spells out benefits for all unionized state employees stipulates that if other positions are open, these must be offered to laid-off workers before they can be offered to potential new employees. Council 4 says unions have not been given an opportunity to review the administration’s records and to confirm that it is adhering to this requirement.

Malloy’s budget director, Office of Policy and Management Secretary Benjamin Barnes, has said the administration is honoring all collective bargaining agreements and is handling a difficult process “respectfully and legally.”

The governor and General Assembly are struggling with deficit projections for the fiscal year that begins in July, as well as for the two after that.

According to the legislature’s nonpartisan Office of Fiscal Analysis, the preliminary budget for 2016-17 is about $930 million in deficit, and finances in 2017-18 and 2018-19 — the first two new fiscal years after the next state election — each are more than $2 billion in the red.

But in a radio ad launched Wednesday, the unions say there’s a better approach to solve the state’s fiscal woes.

“Now it’s time for Gov. Malloy to show up for them by closing the budget shortfall without sacrificing their livelihoods,” the ad states. “The solution’s pretty simple. Ask Connecticut’s wealthiest taxpayers to pay their fair share. Because there’s nothing fair about our public workers paying higher tax rates than the richest 1 percent.”

And in the new online video ad, the announcer says: “Tell Governor Malloy and the legislature to stop firing people who serve our communities.”

“Good leadership requires the backbone to ask the wealthiest to pay their fair share to close a budget shortfall, not fire the people who do the work that all residents depend on,” said Randi Weingarten, national president American Federation of Teachers. “The insistence by the governor and legislature to cut public employee jobs and the services they provide hurts Connecticut residents who deserve and expect quality public education, safe neighborhoods, adequate nurse staffing and regular inspections of things we take for granted like safe elevators, poultry and agriculture.”

The state federation, AFT-CT, is one of largest unions representing state employees.

A second online ad, also being aired on television, was released by SEIU 1199 New England — the state’s largest health care workers union. It features a veteran, a disabled person and a mother each discussing how state employees helped them or their families.

“I’m standing with state workers,” a disabled man says in the ad, “because they stand with me.”