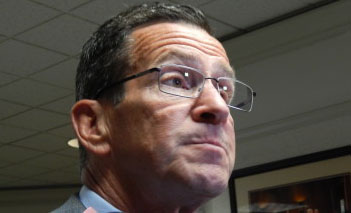 Malloy: ‘We’re not going to negotiate off a budget that is already out of balance. That doesn’t make any sense.’

Gov. Dannel P. Malloy said Friday the starting point in next week’s negotiations over how to deliver a balanced budget should be his administration’s new plan, not the unbalanced proposal adopted by the Appropriations Committee.

“We’re not going to negotiate off a budget that is already out of balance. That doesn’t make any sense,” Malloy told The Mirror after a political event in Hartford.

The Democratic governor is to meet Tuesday with the leaders of the General Assembly’s Democratic majorities and Republican minorities to work on a budget for the fiscal year that begins July 1 that can be passed by the legislature’s constitutional adjournment deadline of midnight May 4.

To close a projected shortfall of more than $900 million, Malloy proposed an austerity budget in February. His proposal quickly fell about $340 million out of balance as in the face of declining revenues, and the version adopted last week by the Appropriations Committee had a similar built in deficit.

Malloy also has expressed his frustration with the Republican minorities in the House and Senate, who say they won’t submit a budget proposal because Democrats have not treated GOP calls to restructure worker salary and benefit costs seriously. Those changes would require concessions from labor unions, though, and union leaders have said repeatedly that workers — who granted concessions in 2009 and 2011 — won’t provide another round of givebacks this year.

The Malloy administration responded Tuesday with a new budget proposal that infuriated lawmakers by cutting school aid to wealthier towns, social services and shrinking a plan to use sales-tax revenue for local property tax relief. Malloy said he is open to restoring those cuts if legislators can find alternatives.

“As we have those discussions, whatever comes out of our budget has got to be replaced with other reductions,” Malloy said. “We have got to agree where we start. I’m not starting anywhere but with a budget that is balanced.”