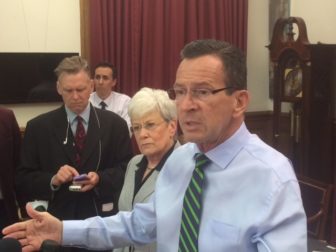 But the Democratic governor remained at odds with the Democratic legislative majority leadership over significant stumbling blocks to an agreement over how to close a $930 million budget gap before the session ends May 4 and the new fiscal year begins July 1. And by the end of the day, Malloy expressed renewed frustration with Sharkey.

Speaking to reporters in his office after a brief meeting attended by Republican minority leaders and skipped by Sharkey and other Democrats, Malloy said he is not taking personally the budget fight or the cancellation by the Democrats.

“I don’t feel jilted. I think it’s really hard – adjusting to a new economic reality of slow growth is very, very hard. And they have big constituencies,” Malloy said, noting he only needs to negotiate with the leaders, not diverse caucuses. “My constituency in these negotiations is largely six people.”

He shrugged off Sharkey’s gibes comparing his budget to a hit list and “a public enemies” list.

“I just think he had a bad day, honestly. You know that happens to people, particularly when they are in a pressurized situation, and this is a pressurized situation where everyone knows we have to cut spending by $900 million and they don’t yet have a plan to get there,” Malloy said. “I’m not going to take it personally. I’m going to chalk it up to everybody has a bad day.”

But Malloy said he is not bending on three principles: An insistence on a budget that is balanced and does not rely on borrowing or drawing down the rainy day reserves for operating expenses. That probably means some continued hard talks about spending cuts.

Senate President Pro Tem Martin Looney, D-New Haven, and Sharkey are in agreement that too many of the governor’s latest proposals are impossible to pass.

“I appreciate that the governor has presented a revised comprehensive budget but the reality is that there are many elements in the governor’s plan that we do not support and that could not be a starting point for discussions,” Looney said.

Sharkey said his sharp comments on Monday were carefully calculated to reflect his members’ resentment and were not the result of stress or a bad day.

“No, I had a very good day. In fact, we had anticipated this for a few days,” Sharkey said. “It’s not that this was an off the cuff remark. It’s a prepared remark, and it really reflected I think where my caucus, our caucus is right now. There’s a lot of frustration within the caucus over what I think they perceived as a disrespect for the priorities we have.”

Sharkey said he was reacting to what he saw as a deliberate provocation when the administration’s budget revisions included measures previously opposed by lawmakers: cuts to hospitals and property tax relief, plus greater discretionary authority for the administration over spending. 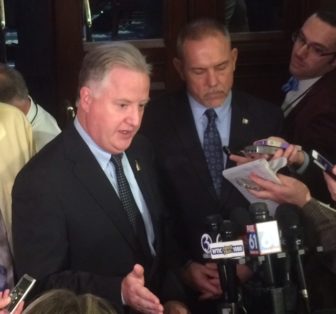 “It felt somewhat like a poke in the eye to the House and Senate, Democrats and Republicans,” Sharkey said. “It wasn’t really the basis for negotiation.”

Sharkey did not rule out meeting the governor’s conditions, but neither did he say it would be central to the legislature’s approach.

“I’m not sure it’s necessarily up to us to decide what we’re going to produce in reaction to the governor,” Sharkey said.

The governor’s office issued a statement from Malloy hours after Sharkey address reporters. He was less conciliatory.

“The intentions laid out by the Speaker today are literally the opposite of how I’ve tried to consistently move the budget conversation forward this year,” Malloy said. “I’ve put all my ideas on the table in the form of two balanced budgets.  The Speaker has not put a balanced plan on the table, and now says he doesn’t plan to do so until the very end of session.”

The $19.9 billion budget the Appropriations Committee approved two weeks ago for 2016-17 is roughly $340 million to $360 million out of balance based solely on revenue projections developed in late February. Further complicating matters, the plan also counts on about $50 million more in labor savings than the administration expects to achieve through layoffs, retirements and hiring restrictions this spring.

With $406 million on hand, the rainy day reserve has enough funds to cover most of this difference.

Would Malloy consider a compromise, using a portion of the rainy day fund while also asking the legislature to endorse some additional spending cuts?

“That’s not my plan,” the governor said, referring to tapping the reserve. “We know that we’ve had enough time to prepare for this budget.” 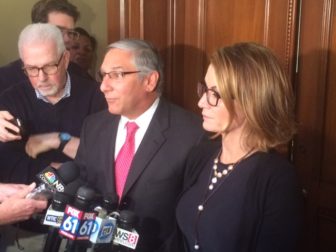 More importantly, the governor conceded Connecticut still might need that reserve just to make it to the end of the current fiscal year on June 30.

Administration budget staff and the legislature’s nonpartisan Office of Fiscal Analysis are preparing their final revenue projections for the session. This forecast, which will be shaped largely by state income tax filings before the April 18 deadline, is due on April 30. And neither the governor nor legislators have ruled out the possibility that tax receipts, which have eroded steadily over the past 15 months, might do so again.

If Connecticut exhausts its reserve to balance the next fiscal year — and if eroding tax receipts open up a last-minute shortfall before the current year expires on June 30 — the state would be forced to borrow.

Republican leaders took the opportunity Tuesday to criticize Democratic leaders for not attending a previously planned meeting with Malloy.

Senate Minority Leader Len Fasano of North Haven and House Minority Leader Themis Klarides of Derby conceded their caucuses likely wouldn’t support either the governor’s budget or the plan from the Democrat-controlled Appropriations Committee, but they said there still was value in keeping communication open.

“The whole intention is to see what we can agree on, what we can work on, things we don’t agree on,” Klarides said. “They made the decision not to be in the room, which I think was an irresponsible decision on their part. But we are going to continue having these conversations.”

While Republicans kept their appointment with Malloy, they seemed in agreement with legislative Democrats on key budget principles: opposition to cutting municipal aid, hospitals and to certain social services programs.

“We think that goes in the wrong direction on a number of grounds,” Fasano said. “But that doesn’t mean you don’t bring ideas to the table.”

The Republican leaders have said they don’t expect to follow their normal routine and submit a Republican budget option this session.

The GOP leaders note that their chief budget-cutting proposals hinge on restructuring state employee salary and benefit costs, and that they called for them as early as April of last year, again during a December special session, and repeatedly since the 2016 session began in February.

Throughout 2014, Malloy and Democratic legislative leaders called this a false solution, though they all reversed themselves this spring and supported concessions as the deficits grew worse.

Still, union leaders continue to insist workers will not grant another round of concessions. And Democrats insist Fasano and Klarides need to put some new cost-saving ideas on the table.