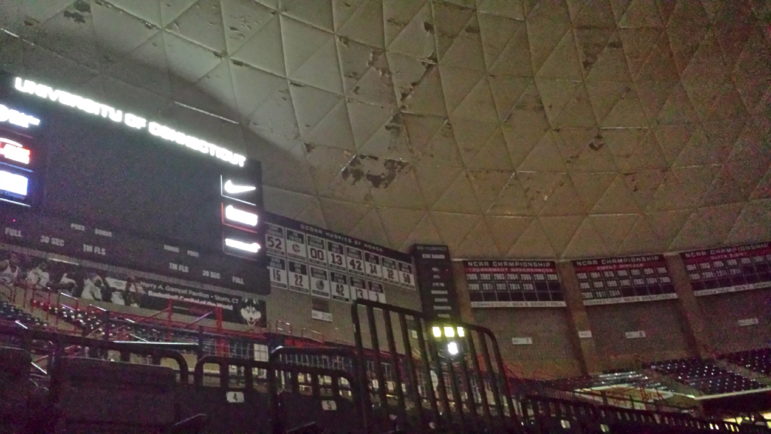 When the University of Connecticut Board of Trustees voted Wednesday to delay renovating the leaking and unsightly dome at Gampel Pavilion, the action typified cost-cutting decisions being made across the state as the limit on Connecticut’s credit card is pulled way down.

The General Assembly is expected to vote before it adjourns May 4 on a plan that would cancel more than $1.1 billion in financing earmarked for an enormous array of purposes in both the public and private sectors.

At the heart of it all is the state’s economy and tax system — neither of which have performed up to state officials’ expectations since the Great Recession ended six years ago.

“Everybody is going to be concerned. I know that’s coming,” said Rep. Betty Boukus, D-Plainville, a member of the Finance, Revenue and Bonding Committee and co-chair of the bonding subcommittee that was required to compile the cut list. “You don’t cut that kind of money and not have people get upset.”

The process Boukus is referring to involves a statutory cap the state sets on the general obligation bonds it sells on Wall Street to finance most construction projects. General obligation bonds are repaid with resources from the state budget’s General Fund. This fund includes income, sales and corporation tax receipts, funds generated by several other minor taxes, gaming proceeds, several categories of federal grants, and revenues from various fees. The bulk of transportation improvements are financed with a different type of bonding and paid off with fuel tax receipts.

Under this capping system, the amount of financing the legislature can authorize is limited by Connecticut’s revenues. And when those revenues shrink, so does the borrowing limit.

Tax receipts have begun to drop precipitously over the past year.

For example, the state income tax, which funds roughly half of the annual budget, is projected to raise about $9.3 billion this fiscal year — about $500 million less than the legislature and Gov. Dannel P. Malloy’s administration originally anticipated.

And that estimate has been dropping lately on a daily basis.

And analysts’ outlook worsened Wednesday, when they downgraded expectations by another $45.2 million.

So far that means Connecticut has to cancel $866.4 million in previously approved bonding.

And because the governor and legislature want to add about $279 million in financing for new initiatives, that means the total that must be canceled to bring Connecticut under its bonding cap is almost $1.15 billion.

This isn’t the first time Connecticut has had to cancel items it was planning to put on its credit card, though legislators say this round of purging is the worst in recent history.

Boukus noted that not all of the canceled bonding authorizations had been likely to be funded, even if revenues had not fallen. The State Bond Commission — a panel led by the governor and his budget office — must approve projects before financing can be secured, and the commission typically endorses only a portion of the priorities selected by the legislature.

Still Boukus conceded that this list was particularly difficult to compile. She praised Democrats and Republicans alike on the Democrat-controlled finance committee, saying everyone understood that priorities had to be set and many projects put on hold.

“Both sides of the aisle recognized that the revenues just aren’t there,” Rep. Chris Davis of Ellington, ranking GOP representative on the finance committee, said, adding he’s hopeful the rest of the legislature will accept this difficult process as well — because it may not be over.

“I think it’s a continuous process as long as the revenues continue to slide,” he said. “We may have to do this again next year.”

About $81 million in financing for UConn and for the state’s other university system, governed by the Board of Regents, was pushed back one fiscal year and won’t be available until 2017-18. 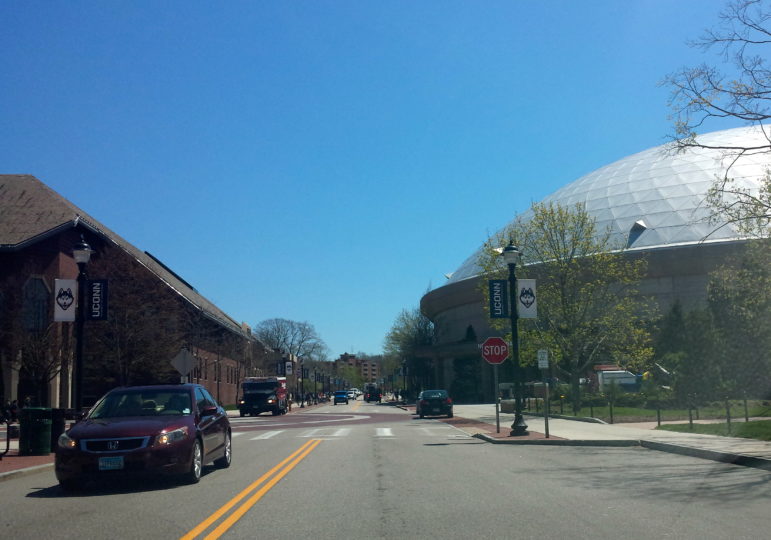 Another $55 million earmarked for the four regional state universities, the community colleges and the Board of Regents that administers them, was canceled.

Gampel Pavilion, the home of the University of Connecticut’s championship basketball teams and location of student graduations, has a flaking and leaking dome that was slated to be renovated at a cost of $10 million.

“We were asked. like all other state agencies, to be able to defer some construction projects or cancel some projects because of the issues the state is having with its budget,” Laura Cruickshank, the university’s chief architect, told the UConn Board of Trustees Wednesday.

The university trustees voted to delay the repairs for a year — a decision made after outside consultants determined doing so would not put the safety of the public at risk.

“People will be safe in there,” Trustee Tom Ritter said of the decision to delay the project, which was being done largely for cosmetic reasons.

UConn officials recently identified four projects in the university’s$4.3 billion construction portfolio that could be delayed since ground has not been broken for them.

In addition to Gampel, the $158.4 million renovation of the largest building on campus – the Gant Science Complex – would be put off, as would the $27.8 million renovation to the Fine Arts Complex, and a $4 million update to the sewage system to better remove fats and oils.

Scott Jordan, UConn’s chief financial officer, said the renovations to the Fine Arts and Gant Science complexes would take priority over the work on the sewage system and Gampel roof when money becomes available.

Gant is “the centerpiece” of Next Generation, the multi-billion construction plan approved by the legislature in 2013 to increase enrollment by 6,000 students in degrees related to science, technology, engineering and math, known as the STEM fields, Jordan said.

Nearly $28 million in bonding earmarked for the Connecticut State Department of Education was canceled, with most of those funds coming from construction grants earmarked for the state’s 30 lowest-performing school districts and for the regional vocational-technical schools.

Left untouched were the hundreds of millions the state spends each year to build and renovate magnet, charter and neighborhood public schools. The amount the state has spent building public schools has skyrocketed since 2010-11, when the state legislature authorized adding $286.8 million in school construction projects to the Bond Commission’s menu of potential approvals.

In 2013, the legislature authorized another $739.2 million, and this year, the Department of Administrative Services has recommended the legislature add another $518.8 million for schools in Bridgeport, Bloomfield, Greenwich, New Britain, Rocky Hill, Stamford, West Haven, Naugatuck and Weston

Another $16.6 million was taken from construction to help the School Readiness Program, operated by public schools and nonprofits, expand enrollment in high-quality preschools.

Connecticut also provides the bulk of its social services at the community level through private, nonprofit agencies.

Of the $11.2 million in bonding canceled involving the Department of Children and Families, most of those funds would come from grants to community-based nonprofits and to group homes, which the agency is increasingly relying on as it downsizes the number of facilities it runs.

Another $9 million would come from the Department of Social Services, including funds for elderly centers and other neighborhood facilities.

Also canceled was $12 million in bonding earmarked for the Department on Developmental Disabilities. One third would involve grants to community-based nonprofits and the other two-thirds would come from improvements to regional facilities.

Another $84 million for the Department of Economic and Community Development also was eliminated, including $25 million in grants for small businesses, $20 million in manufacturing assistance, $7 million for pollution abatement and grants for more than a dozen tourism destinations and regional economic development and tourism marketing groups.

About $25 million earmarked for the state’s bioscience initiative, centered around The Jackson Laboratory and the UConn Health Center in Farmington, was cut.

And while the bulk of the state’s transportation infrastructure is maintained through a different type of financing, almost $17 million in general obligation bonds for rail and port improvements and general pothole repair was canceled.

More than $140 million in bonding for the Department of Energy and Environmental Protection and the Department of Public Health was canceled including funds for clean-water projects, emergency services, stem cell research, bikeways and trails and numerous community based projects.

Another $50 million in bonding for the Department of Housing was canceled.

About $15 million was taken from the Flexible Housing Program, which is used to encourage home ownership in Connecticut’s poor urban centers.

Courthouses and other state facilities

General obligation bonds also are the chief means of paying for repairs and upgrades to state facilities.

Almost $28 million earmarked for the Judicial Branch was cut. Most of those funds had been designated for facility upgrades and improvements.

The Department of Administrative Services, which oversees most state building maintenance, lost $71 million.