Yeah, CT health care costs are high, but which ones are highest? 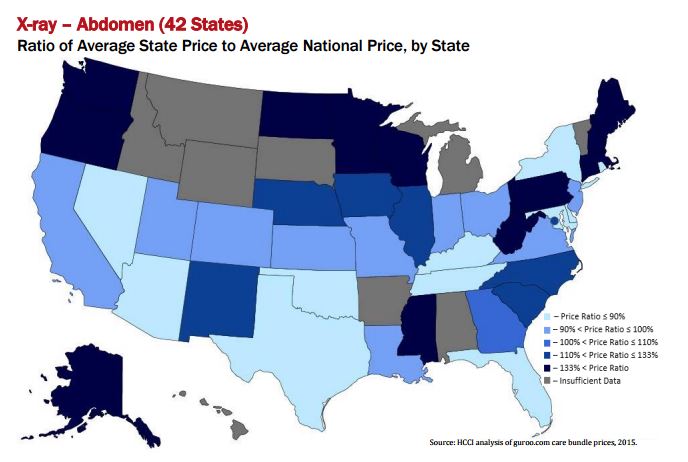 The cost of medical care for Connecticut patients with private insurance is more than 20 percent above the national average for dozens of medical services, but exactly how much higher can vary widely across the state, according to data released Wednesday and an analysis published in the journal Health Affairs.

The amount paid for a cesarean childbirth and newborn care in the hospital, for example, averaged $20,107 in Connecticut – 26 percent above the national average, $15,917, according to data based on claims paid by three private insurance companies. But costs also ranged within the state, averaging $20,773 in the Bridgeport area, $19,715 in the Hartford region, and $18,915 in and around New Haven. 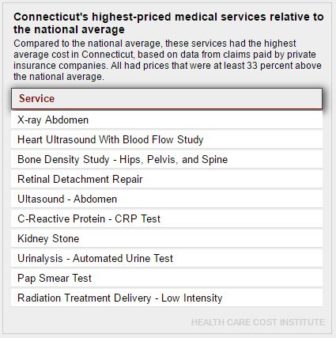 Connecticut’s place among the higher-cost states, and the variation within it, is unlikely to surprise to those who follow health care spending. But the data offer a more detailed look than has previously been available about exactly what services and what markets have the highest – and lowest – comparative costs for privately insured patients.

“What this really does for many states is allow them to identify which service areas have high levels for which types of services, or in which geographies, and then address it with far greater granularity and specificity,” said David Newman, the study’s lead author and executive director of the Health Care Cost Institute, a nonprofit research organization that maintains a massive database of claims paid by Aetna, Humana and UnitedHealthcare (the claims are de-identified, meaning they don’t include information on patients’ identities). 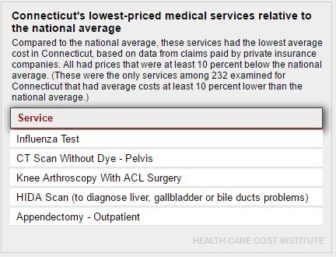 The researchers used claims data from Jan. 1, 2010, to Dec. 31, 2013, and adjusted the prices based on health care spending trends to levels that would reflect 2015 prices. They calculated average prices for some medical services as single items – like pregnancy ultrasounds – and, for others, as episodes of care that involve multiple services. For example, the amount paid for knee replacement includes the cost of the physician visit, surgery, physical therapy and follow-up evaluation. (Information on the average prices for services in various parts of each state is available on the website guroo.com, which the institute runs.)

Of the 232 services examined in Connecticut, 195 had average prices above the national average, including 27 that were more than 33 percent higher than the national average. Those with the highest prices in this state, compared to the national average: abdomen X-rays; heart ultrasounds with blood flow studies; bone density studies of the hips, pelvis and spine; retinal detachment repair; and abdomen ultrasound.

While in some states, the services with the highest relative prices suggest a potential underlying issue – especially high costs for allergy tests and treatments might point to a shortage of allergists, for example – Newman said those topping Connecticut’s list didn’t point to a systematic pattern.

Connecticut’s high health care spending reflects both high prices and levels of utilization of health care services, Newman said. “And that’s not terribly unique in the Northeast,” he added.

In the article, Newman and coauthors Stephen T. Parente, Eric Barrette, and Kevin Kennedy wrote that some price variation is probably justified by differences in the cost of doing business – such as rent, labor and supply costs. “However, the remaining variation is most likely due to differences in underlying market dynamics, such as varying market power, a lack of transparency, or the availability of alternative treatments,” they wrote.

“The questions that remain for researchers, policymakers, and health care leaders are as follows: Why do prices for the same service differ markedly across distances of only a few miles, and what amount of that difference is justifiable?” they added.

The institute’s data was the source of information behind a recent high-profile study that linked prices with hospital market competition; that is, the fewer competitors, the higher the prices insurers paid.

Health care prices and spending have drawn increased focus from state policymakers in recent years, and the state’s health care cabinet is in the midst of a yearlong effort to study cost containment models used by other states and identify ways Connecticut could monitor and control health care costs, and improve market competition, cost and quality transparency, and outcomes.

But while having more data on price variation can help to focus efforts, Newman said the results of his organization’s analysis underscore the complexity of understanding the dynamics behind pricing.

For example, he said, high prices for heart disease treatment in one area could reflect the fact that most of the local cardiologists have consolidated into a single practice, giving them market leverage, while family practitioners and pediatricians in small practices have little clout when negotiating rates with insurers. Variations in imaging prices could reflect differences in the number of imaging providers.

And that means that attempting to address price variations through policy is more complex, because it requires fine tools, Newman said. “It’s easy to say all our prices are high, but they may not be universally high in all locations or for all services,” he said.

The data below reflects prices from the website guroo.com. The places in Connecticut identified below refer to the regions, rather than the specific municipalities.