Senate would allow Amtrak to keep profits in Northeast Corridor 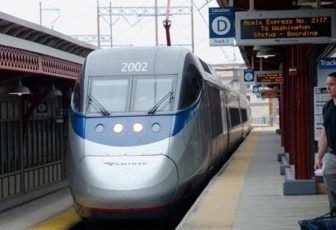 Washington –  Congress will fall short of approving the $1.9 billion President Obama sought to subsidize Amtrak’s nationwide operations, but it is, for the first time, moving to rope off money for the Northeast corridor, the only profitable routes for the passenger rail line.

The Senate on Thursday approved a transportation spending bill on an overwhelming 89-8 vote that would for the first time have a special allocation for the Northeast Corridor, about $345 million. Right now, Amtrak’s Northeast corridor must compete with its other rail lines for money.

The Senate bill also would do something supporters of the Northeast corridor service have sought for decades – allow the rail line to keep the profits it makes in the region and reinvest them on its service that runs from Washington, D.C., to Canada.

“This is a watershed moment for the Northeast Corridor,” said Sen. Chris Murphy, D-Conn., who sought the special earmark for the region.

A transportation bill approved by the House Appropriations Committee this week, like the Senate bill, also allocates $1.4 billion for Amtrak. Although that was less than Obama’s request for $1.9 billion, both the House and Senate bills would boost Amtrak funding by about $30 million in fiscal year 2017 over fiscal year 2016.

But the House bill does not contain a provision requiring Amtrak to keep its Northeast Corridor profits in the Northeast to make capital investments and safety improvements. It is estimated those profits exceed $300 million each year.

After full House approval of its transportation bill, expected in the next few weeks, negotiators from the House and Senate will meet to craft a final bill, and there may be some opposition to the idea of requiring Amtrak to keep so much money in the Northeast.

Lawmakers are expected to press to divert some or all of that money to rail lines in their states that run in the red.

“It has always been a fight with the rest of the country,” Murphy said.

Proponents of allowing Amtrak to reinvest its profits in the Northeast say these are the most traveled routes, requiring more updates and repairs.

For instance, next month Amtrak hopes to retire its fleet of 54 AEM-7 locomotives that run along the Northeast Corridor. They have been in operation for 37 years and traveled more than 220 million miles.

Costly repairs are also in the works, including a new tunnel to replace a 106-year-old one between New Jersey and New York City that was damaged by Super Storm Sandy.

Amtrak funding is also under pressure from conservative Republicans who say the nation should not subsidize rail lines that are not profitable.

In 2015, Amtrak earned about $3.2 billion in revenue and incurred about $4.3 billion in expenses.

“No country in the world operates a rail system without some form of public support for capital costs and/or operating expenses,” Amtrak says on its web site.