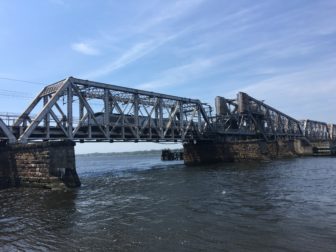 Old Lyme — As federal officials near a decision on a railroad bypass residents are calling destructive and wasteful, about 70 people from across southeastern Connecticut’s shoreline gathered Friday with local, state and federal lawmakers at a forum at Old Lyme Town Hall to find out how they could help stop it “dead in its tracks.”

Blumenthal and Reemsnyder said officials at the Federal Railroad Administration (FRA) have agreed to hold a meeting with southeastern Connecticut residents before making a decision on which of three major railroad upgrades they will pursue for the Northeast Corridor (NEC). A spokesman for the FRA confirmed Friday that agency officials would attend. The meeting has not been scheduled, but Blumenthal is hoping for high turnout once a date is set.

“We have to approach it as though we were making (a legal) case, presenting evidence,” Blumenthal said. “Our side should be fact-based and evidence-based.”

The railroad upgrades under consideration are part of FRA’s long-term plan – called NEC Future – to improve rail service on its 457-mile line from Washington, D.C., to Boston. Federal officials hope the improvements will bring high-speed rail to the Northeast. The agency unveiled three proposals in November, one of which would reroute the line in southeastern Connecticut from Old Saybrook to Rhode Island.

Local leaders and residents are concerned that this proposal – known as Alternative 1 – would devastate historical sites in the region and negatively impact the environment. The proposal is the least ambitious and least expensive of the three, at a cost of $68 billion.

The second plan, Alternative 2, would go from New Haven to Hartford via Meriden before heading northeast to Boston – with a stop near the University of Connecticut in Storrs. It would come at a price tag of $135 billion. 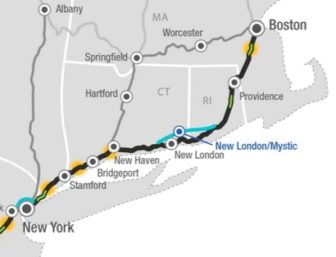 The most ambitious proposal, Alternative 3, would create a new rail line from White Plains, N.Y., to Danbury, Waterbury and Hartford before splittinginto to routes to Boston – one through Storrs and the other through Worcester, Mass. That proposal would cost $300 billion.

Alternative 1 would move southeastern Connecticut’s rail line inland starting in Old Saybrook before crossing the Connecticut River via a new bridge or tunnel. The line would then come close to or cut through many of Old Lyme’s historic sites before continuing through East Lyme, Waterford and New London, and stopping at a new station in Groton. This would replace the New London station as the region’s hub.

“This is an absurd idea,” said state Sen. Paul Formica, R-East Lyme. “This is not the Wild West that we are blazing a railroad trail through, vacant and open property. There’s just not a concern (from federal officials).” 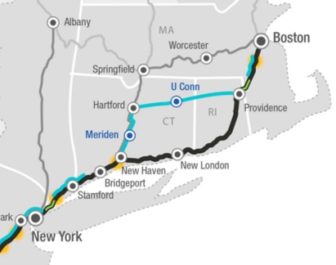 Local officials said they were not consulted before the proposal was unveiled, leaving some offended and frustrated.

“It was like the railroad (proposal) – no pun intended – was running down the track before we even had the chance to give some input,” Old Lyme Selectman Skip Sibley said.

Four of the region’s first selectmen – Reemsnyder of Old Lyme, Carl Fortuna of Old Saybrook, Mark Nickerson of East Lyme and Rob Simmons of Stonington – all said they oppose Alternative 1, and would have voiced that opposition to federal officials if given the opportunity in the earliest stages of the process.

There has been an outpouring of public opposition to the proposal from residents since January. During a three-month online public comment period from November to February, the FRA received 3,200 submissions – about 1,000 of which came from Old Lyme residents. The agency received about 1,850 comments in total from Connecticut. 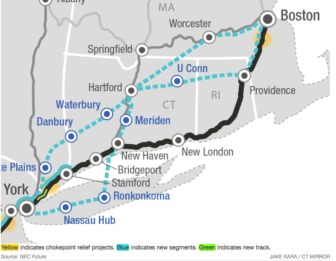 A dozen people spoke out against the proposal at Friday’s forum, some offering alternatives of their own. Leaders and residents agreed any federal funding would be better spent on improving existing rail services in the area instead of replacing them.

But no one from FRA was there to hear their concerns, and those who spoke were preaching to the choir as far as the one federal official in the room, Blumenthal, was concerned. Blumenthal advocated getting the FRA to meet with residents before making a decision.

“If they see what is at stake, I think their views will be dramatically affected,” Blumenthal said. “My hope and expectation is based on the view that they will have some kind of common sense and rationality.”

The FRA did hold hearings in Hartford and New Haven earlier in the year.

Community leaders and residents say what is at stake is the character of quiet towns with a deep-rooted sense of their histories. Old Lyme, a former artists’ colony and popular summer getaway, stands to lose some of its historic buildings and art centers. Those that remain will be negatively impacted by the presence of the new rail line, town officials said. 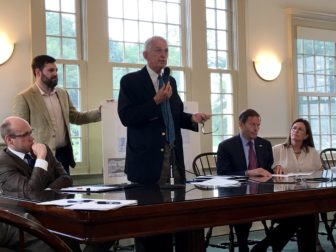 In particular, the FRA received a barrage of negative comments about its decision to route the line through Lyme Academy College of Fine Arts, a branch of the University of New Haven. Other historic art sites in the area around it – including the Florence Griswold Art Museum – would be near the new rail line.

BJ Bernblum, a member of the Old Lyme Board of Finance, said he fears federal approval of the route, even if only tentative, would create uncertainty and have an impact on real estate values in the area.

“A line on the map does real harm,” said Sam Gold, executive director of the Lower Connecticut River Valley Council of Governments.

Nearly everyone in attendance at the forum – leaders and residents alike – argued for the FRA to leave southeastern Connecticut’s rail section unchanged. Some residents offered support for Alternative 2, however.

Simmons, who served three terms in Congress representing eastern Connecticut during the 2000s, said money would be better spent on minor improvements the section has needed for many years, including safety upgrades.

Outside of southeastern Connecticut, Alternative 1 has received some support. Audubon Connecticut, an environmental group, is publicly backing it. Overall, however, the reception to all three proposals has been tepid. Gov. Dannel P. Malloy does not support any of the proposals, and is advocating for additional federal funding to improve existing infrastructure first.