Leaders struggle with next steps in desegregating schools 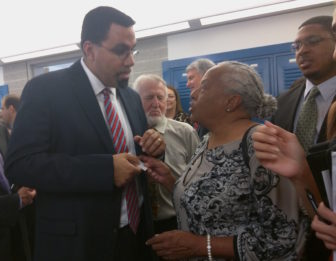 As pressure mounts to desegregate public schools in Connecticut in ways other than opening expensive magnet schools, U.S. Education Secretary John B. King Jr. visited magnet schools in Hartford Wednesday to tout that approach as “a national model.”

“Certainly Hartford offers a model,” said King during a roundtable discussion with the governor, state education commissioner, Connecticut’s two U.S. senators, students and local educators at one of the magnet schools in the Hartford Learning Corridor. “This is an opportunity to celebrate that work. It’s an opportunity for me to listen and learn from all of you what’s working here and how we ensure that we share this story with the country.”

Meanwhile, a few blocks away, attorneys representing the Hartford parents who successfully sued the state in the landmark Sheff vs. O’Neill desegregation case met with a mediator over a current stalemate between them and state leaders on further desegregating Hartford schools.

When the Connecticut Supreme Court ordered the state 20 years ago to eliminate the inequities caused by segregated schools in Hartford, they left it up to state lawmakers and the attorney general’s office to negotiate with the plaintiffs on how to do that.

The main tool to date has been opening magnet schools with specialized learning themes to draw suburban, middle-class white students into schools with city students.

However, the state more recently has been adamant that it won’t fund any new magnet schools in Hartford, the legislature has placed a moratorium on spending state money for new regional magnet schools elsewhere, and Democratic Gov. Dannel P. Malloy has said he doesn’t believe the state has an obligation to further integrate Hartford’s schools.

Malloy was unavailable Wednesday to discuss whether he intends to push for further integration and, if so, what his approach would be.

During Wednesday’s forum, the governor focused on the need to recruit and hire teachers that better reflect the ethnicity of their students. Earlier this year he signed into law legislation that makes it easier for students to enter teacher preparation programs and for teachers from other states to work in public schools in Connecticut.

Frustration has been mounting for years in some quarters with the state’s approach to desegregating schools. Each year thousands of students are left on wait lists for magnet schools, and some parents and educators are uneasy as they see huge sums going to magnet programs while programs and staff are cut at their neighborhood schools.

On Tuesday night, the Hartford school board voted unanimously to recommend that the state no longer designate the Journalism and Media Academy as a Sheff magnet school, saying it has no hope of reaching its integration goals, since too few suburban students are applying, and more local residents should be allowed to attend.

But Elizabeth Horton Sheff, who’s son was the lead plaintiff in the desegregation lawsuit, said during the forum that now is not the time for the state to slow down school integration.

“This is a justice question… We have two choices: We can either do it or wait for our own demise,” Sheff told King and other members of the panel. “I am convinced, have been for 30 years now, that we are the path here in Connecticut toward providing our children with an opportunity that they deserve. This is not something we should be bargaining about.”

“We’ve had stormy days here, but we have made progress. And we are at a point now in this state where, because there have been ups and downs, people are getting frustrated because it’s been so many years,” she said. “Now is not the time to turn back and throw the baby out with the bath water. We have come far, much too far to drown in shallow waters. We are at a point now that we need to lay down our petty differences. It’s the adults that can either make this happen or not.” 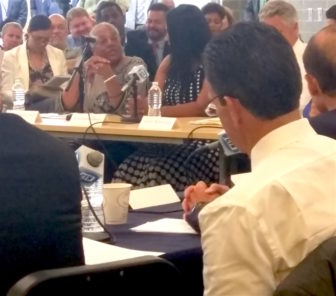 Just over half of the city’s students still attend racially isolated schools where more than three-quarters of the students are non-Asian minorities. And many schools in other parts of the state have become much more segregated over the years.

Asked in June whether the state has an obligation to provide a diverse school for more than half of city students, the governor said the focus should instead be on improving the education at the schools students already attend.

“I wouldn’t say it’s beyond that,” Malloy said. “Our goal is to provide quality schools. That’s what our goal needs to be ultimately.”

About 40,000 students attend 84 magnet schools each year in Connecticut – about 7 percent of public school students.

The lack of diversity in public schools is not unique to Connecticut. The Government Accountability Office, a federal watchdog agency, in May found that segregation is increasing in public schools across the U.S.

However, Connecticut comes in 13th and 14th place for the segregation of its black and Hispanic students, respectively, in public schools, reports UCLA’s Civil Rights Project.

Schools in Connecticut with high concentrations of minority students also often have large numbers of students living in poverty. A trial just wrapped up in Hartford that will determine whether students in these high-poverty schools are being provided with the educational opportunities that the Connecticut Supreme Court ruled are required in a separate landmark opinion in 2010.

“There’s much, much more work to do,” Hartford Mayor Luke Bronin, a member of the coalition suing the state, said during the forum. “We’re a city where we have many schools that remain not just racially isolated, but socioeconomically isolated.”

King and Connecticut’s U.S. senators, Richard Blumenthal and Chris Murphy, urged Congress to provide $120 million in federal funding so districts can seek funding to try new approaches. Legislation that would provide such funding, however, has not passed either chamber of Congress. 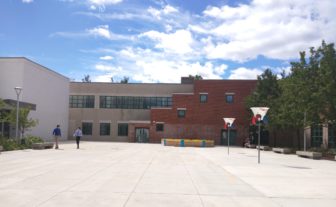 Two students who spoke during the forum walk through the courtyard of two of the magnet schools at the Hartford Learning Corridor.

While focusing on the magnet school strategy, state leaders have left untouched the state law that leaves school district boundaries up to local officials.

The state Supreme Court pointed to that law as the problem in their desegregation decision.

“The districting statute that the legislature enacted in 1909, now codified at 10-240, is the single most important factor contributing to the present concentration of racial and ethnic minorities in the Hartford Public School System,” the justices wrote in their July 1996 opinion.

The chances of changing that law and forcing regional districts is slim, said Rep. Andy Fleishchmann, the House chairman of the legislature’s Education Committee.

“It’s challenging without a mandate to get a district to do more,” the Democrat from West Hartford said during an interview after the forum. “That would require leadership at multiple levels. You need a governor, a whole set of mayors to say, ‘We are ready to rethink the school district’s lines that were drawn generations ago.’ I just don’t foresee that happening.”

Sen. Richard Blumenthal, who defended the state against the Sheff lawsuit when he was the state’s attorney general, said several areas need to be addressed to promote diversity.

“We know in Connecticut that separate is never equal,” said Blumenthal. “Students must be in diverse classrooms and issues including jobs, housing, transportation, and health care must all be addressed when talking about diversity.”