Is school choice really a choice, or a chance? 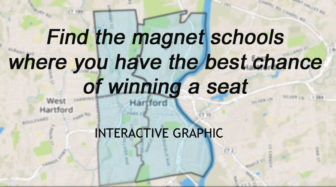 When it comes to winning the lottery for a magnet school seat in the Hartford region, some bets are a sure thing.

All 183 students whose first choice was to attend Classical Magnet High School in northwest Hartford were offered a seat this school year. Seven other magnet schools had a 100 percent acceptance rate as well.

But the odds more often are not in the student’s favor, though the chance of winning a seat varies depending on which magnet or suburban public school he or she applies to.

Of the 1,157 students from Hartford and the surrounding communities whose first choice was to attend the Academy of Aerospace and Engineering Elementary School in Rocky Hill, just 83 were offered enrollment — a 7 percent acceptance rate.

The region’s magnet schools are largely the result of a Connecticut Supreme Court order 19 years ago that the state eliminate the inequities caused by the educational isolation of Hartford’s largely minority school population. Magnet schools were built and renovated in an attempt to attract suburban white students into schools with minority students from Hartford.

Busing city students to suburban schools is another way the state can comply with the order in the landmark Sheff vs. O’Neill case. But many more city children apply than the number of seats suburban districts offer.

In 18 of the total 26 towns participating in the Open Choice program, a student’s odds of being admitted are low.

For example, of the 917 Hartford children who signed up for a chance to go to a high-performing Wethersfield Public School, 12 were offered enrollment. At the Portland Public Schools, 19 of the 20 Hartford students who asked to go were offered a seat.

Overall, 790 of the 2,577 students who wanted to leave their city school for a suburban school won a spot in one of the schools they applied. That’s 30 percent.

The Bronin family’s decision to send their children to a private school in West Hartford has become an issue in the campaign. They made it after Bronin’s daughter failed to win a seat at the Annie Fisher Montessori Magnet while his son, who is younger, did.  Two-thirds of the students who applied to Annie Fisher did not win a seat this school year.

Officials at the Capital Region Education Council also point out that a student’s chance of winning a seat also varies by whether he or she lives in the city or in a suburb. It also increases a student’s chance of winning a seat if he or she applies to multiple schools. For example, overall 58 percent of Hartford residents won a seat to at least one of the schools they applied to. 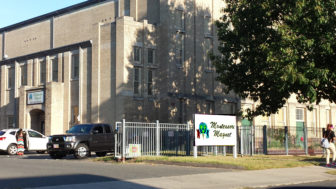 Montessori Magnet at Moylan School in Hartford, where two-thirds of applicants win a seat.

Problems with the lottery

Bronin is frustrated with a lottery system that he says is confusing, lacks transparency and is not helpful to traditional neighborhood schools. His feelings are shared by many Hartford parents — some of whom regularly come before the State Board of Education to express their concerns.

“Our children are more segregated now than ever,” Hyacinth Yennie of Hartford told the state board earlier this year. “They are cast aside like they’re not really important, ‘Oh, only magnet schools are important, because you know what? We are funding them more money.'”

“It’s not fair to our children,” she said.

The state annually publishes a guide to help parents navigate the system. However, it does not outline performance results of the schools; or which schools have historically had lower acceptance rates; or how many new seats, by grade or school, are available the following year. Each school also has its own policy for deciding which applicants get priority in the lottery for considerations like living in a certain part of the city or having a sibling already attending the school.

In Bronin’s case, “We were promised, assured at the time … that sibling preference was almost a guarantee, that our daughter would get in the next year,” he told the Hartford Courant.

At last week’s debate, Bronin told the crowded room that the lottery is broken.

“It wasn’t until days before the school year started that we found out where our kids were going to go. And that kind of thing just doesn’t work,” he said.

Additionally, there are separate lotteries in which parents may enter their children, depending on whether they want to go to a magnet school run by the Capitol Region Education Council or by Hartford Public Schools, a vocational-technical high school or charter school.

The Sheff Movement, a coalition of advocates who support expanding school choice to integrate city schools, agrees there are major problems with how the state runs the lottery.

“Anyone that has gone through the school choice process in Hartford knows that the system is complicated,” the nonprofit wrote in a policy brief last summer. “When there isn’t clear information about how the system works, parents can question the fairness of the process… The more complicated the system appears to be, the more likely it is to deter parents who have less time or who are less experienced at dealing with complex forms.”

Attorneys for the state cited this frustration when making the case last week to a Superior Court judge that the state should no longer be forced by the Sheff court order to further expand school choice.

“There is a sense of increasing frustration in what is perceived to be a two-tier educational system for Hartford students: one for those that happen to get in through the lottery and one for those who do not,” said Ralph Urban, assistant attorney general.

But, he added, “We don’t think if you don’t get into the magnet school you want that your constitutional right has been violated.”

Another problem the assistant attorney general and an attorney for the City of Hartford cited in court Friday is that seats in some magnet schools are not being filled because too few suburban families are applying. Enrolling more minority city students would mean the school is no longer considered integrated by the court, meaning more than 75 percent of the students enrolled are black or Hispanic.

“There are magnet seats that sit empty. We are concerned. There are empty available seats that we are not able to fill,” said Melinda Kaufmann, assistant corporate counsel for Hartford.

State officials were unable to provide The Mirror with a list of schools that are under enrolled, but estimate the number of vacant seats at “fewer than 200.”

Among the 18,787 students who entered the school choice lottery for enrollment in a magnet school this school year, two-thirds were suburban children.

Correction: An earlier version of this article incorrectly stated how many city students who apply to attend a suburban school win a seat. The article should have stated 790 of the 2,577 applicants won a spot. The original acceptance rate reported did not factor in that the same child may apply to multiple schools.