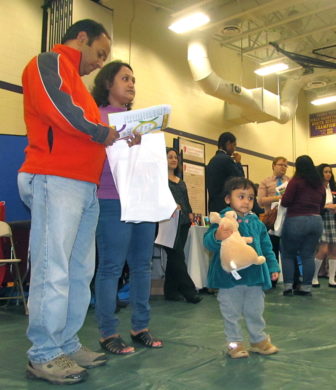 Suhash Ghosh and his wife Neeta Roy search for a school for their daughter at the School Choice Fair in Hartford last year.

A Superior Court judge Friday gave the state another year to figure out how to desegregate the schools thousands of Hartford children attend, though Gov. Dannel P. Malloy said later in the afternoon the state is under no obligation to move much beyond currently required levels of integration – 47.5 percent of Hartford’s students.

“I wouldn’t say it’s beyond that,” the Democratic governor said during a phone interview. “Our goal is to provide quality schools. That’s what our goal needs to be ultimately.”

Just over half of the city’s 21,500 students still attend racially isolated schools, 20 years after the Connecticut Supreme Court ordered the state to desegregate these low-performing schools.

“Hartford students suffer daily from the devastating effects that racial and ethnic isolation, as well as poverty, have on their education,” the court ruled in the landmark Sheff v. O’Neill lawsuit. The courts have been supervising compliance with the Supreme Court order ever since.

Attorneys representing the state have been pushing for almost a year for the court to end that supervision.

“The state knows it’s constitutional obligation,” Ralph Urban, assistant attorney general, told a Superior Court judge last September. “The state, frankly, knows how to do what it needs to do to continue to improve the City of Hartford schools.”

Instead of leaving the issue to the state, the order signed Friday by Judge Marshall K. Berger, Jr. – and agreed to by the lawyers representing the state, the city of Hartford and the parents who brought the Sheff case – essentially puts the state’s previous desegregation approach on autopilot by providing funds so existing magnet schools can add grades to enroll more students.

Magnet schools opened with a mix of city and suburban students typically phase in grades over several years.

The order increases the number of city residents to be enrolled in seven existing magnet schools by 228 and suburban students by 246. The order also sets a “target” of placing 300 more city students in high-performing suburban schools – a goal the state has regularly fallen short of each year.

“This does represent some minimal progress,” said Martha Stone, an attorney for the parents and executive director of the Center for Children’s Advocacy. “The promise to thousands of Hartford children is still very elusive.”

Almost 6,000 Hartford students – nearly one-third of the capital city’s students – applied to leave their neighborhood schools for this school year. Thousands were not offered a seat elsewhere. (See which school your child has the best chance of getting into here.)

Robert Cotto Jr., an elected member of Hartford’s school board who also researches public education at Trinity College, summarized on his blog the feedback he has been getting as families find out whether they have won a seat.

“I see a frustration with why their children can’t attend schools like the magnet schools, which are relatively better-resourced and racially and economically diverse schools. This frustration is, in part, the result of troubled state implementation of this desegregation program,” he wrote.

But additional school choices or funding to improve Hartford’s troubled school system is not coming soon from a state government having to make large budget cuts to avoid deficits. The Hartford school board, facing its own deficit and the cuts from the state, recently voted to shed staff.

“I am certainly aware of the fiscal issues that the state is now facing. I am going to approve this stipulation,” Judge Berger said during a brief meeting in Hartford with attorneys involved in the Sheff case.

The new agreement requires the state to ensure that 47.5 percent of city students attend integrated schools – a benchmark the state agreed to meet for the school year that just ended but fell short of by 2 percent.

There were 14,848 of the city’s students remain in schools where more than three-quarters of students are black or Hispanic. The state’s approach to providing almost half of Hartford’s students a seat in a diverse classroom has been expensive.

The state’s primary strategy has been building new magnet schools in an effort to attract white suburban students. Over the last 10 years, the state has spent $1.4 billion to build magnet schools and renovate existing buildings, the state Department of Education reports. More than $150 million is spent each year to operate those schools.

It was not available Friday how much this new agreement will cost the state, though the school construction bill the governor has signed into law provides tens of millions for magnet school construction projects in the Hartford region. Those schools are already open but are operating in temporary space.

The governor said it’s important to remember that the state is in a very different place than it was when the Sheff lawsuit was filed 25 years ago, and schools of choice should not be judged on whether they meet a rigid cutoff for having too few white students.

More students and their parents have school choices now, the governor said. “That’s a very different different situation than what existed prior to this case being brought, where only a couple percentage of people had any choice at all.

“What I am saying is we are in a very different situation today than we were when the Sheff vs. O’Neill case was originally brought, and people’s desires are represented differently. We have a large percentage of people being accepted into schools that didn’t exist previously, and we have a different racial balance represented,” he said. “We are ethnically, religiously, racially a very different state today than we were 20 plus years ago.”

Over the last decade, the state has made progress in providing more city residents a desegregated school. During the 2007-08 school year, 1,800 Hartford students were attending integrated schools, or 11 percent of the district’s students. In the school year that just ended, 9,743 students, or 45.5 percent, attend an integrated facility.

A Connecticut Mirror review last year of student enrollment in districts across the state, however, found that minority isolation in large cities has intensified over the years. The Supreme Court order in the Sheff case applies only to Hartford and not other districts with high concentrations of minority students.

In Bridgeport, for example, the percentage of minority students in public schools has risen progressively from 51 percent in 1968, to 84 percent in 1988, to 91 percent in 2013.

A few floors up in the same courthouse in which Friday’s proceedings took place, a trial is exploring conditions in schools throughout the state to determine whether the state is providing all Connecticut students with the education the state Constitution requires, regardless of whether it’s in an integrated setting.