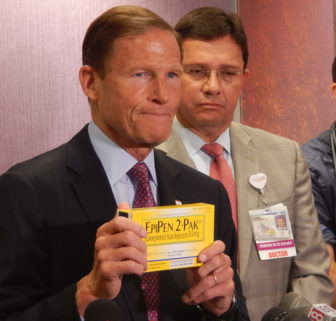 Washington – Connecticut, one of 11 states that approved a law requiring schools to stock EpiPens, is on drug maker Mylan’s sizable lobbying list.

The Center for Public Integrity listed Mylan, the manufacturer of the EpiPen, as among the top companies who have recently expanded their presence in state houses across the nation.  The EpiPen is the widely used medical device that quickly administers a dose of epinephrine to counter allergic reactions,

According to the center, Mylan, under fire for its steep price hikes of the EpiPen, expanded its lobbying presence in state houses to Connecticut and 35 additional states between 2010 to 2014.

The reason for the lobbying campaign?

“EpiPen distributor Mylan has pushed to expand the use of epinephrine injections to treat allergic reactions in schools and restaurants,” the center said.

In Connecticut, Mylan hired the lobbying firm of Camilliere, Cloud & Kennedy at the end of 2013, paying it $30,000 plus expenses to represent its interest in Hartford in 2014 and $42,000 to represent the company the following year.

Meanwhile, in June of 2014, the Connecticut general assembly approved a bill that required all state primary and secondary schools to carry a supply of EpiPens. The bill, which Gov. Dannel Malloy signed into law, also allowed school personnel other than a school nurse – if they were properly trained – to administer the epinephrine.

While Connecticut is only one of 11 states to mandate schools have emergency supplies of EpiPens – California, Virginia and Maryland are also on the list —  other states have approved laws allowing student to bring the dispensers with them to classes or encouraging schools to stock the drug.

“When we took over this product eight years ago, there was very, very little awareness,” said Mylan CEO Heather Bresch in a recent MSNBC interview. Bresch, the daughter of U.S. Sen.  Joe Manchin, D-W.Va., served early in her career as the company’s head lobbyist. “We have passed legislation in 48 states to allow undesignated EpiPens to be in schools.”

Those laws, and a 2013  federal law that gives incentives to states that require schools to stock EpiPens, have been cited as part of the reason Mylan raised its price of the drug. When Mylan bought he company that manufactured the injector in 2007, the cost for a single EpiPen was $57 dollars. Just nine years later, the cost has skyrocketed to as much as $700 for a pack of two,

“I am all the more outraged by Mylan’s price gouging practices because they are exploiting the 2013 law as well as their monopoly position,” said Sen. Richard Blumenthal, D-Conn., one of several lawmakers calling for an investigation of the pharmaceutical’s price hikes.

The Connecticut Department of Education said it does not know how much the new mandate cost the state’s more than 1,300 primary and secondary schools, because the drug is purchased at the local level at a number of approved pharmacies throughout the state.

“We don’t collect this information,” said Department of Education spokesperson Kelly Donnelly. “We do know that some schools have been stocking EpiPens for many years.”

The general assembly’s Office of Fiscal Analysis, however, estimated the cost of EpiPens, which is reduced for schools from an average of $600 to $700 per pack of two, to be  $270-$360 per school.

“EpiPens cost, on average, $90-$120 per two-pack, and it is estimated that each school would require two to three packs,” the OFA said.

That means the cost to Connecticut schools is from $353,700 to $471,600 per year because the EpiPens expire after 12 months and must be replaced. The OFA also there may be an additional cost incurred by the requirement that someone trained in administering the EpiPen be at the school at all time.

The cost of EpiPens to Connecticut schools may be defrayed by Mylan’s “EpiPens4Schools” program, which gives some schools two twin packs of the medical devices for free.

“We received 98 boxes of EpiPens, both adult and junior doses, for this school year,” said Deborah Chameides, the health services coordinator for Hartford Public Schools. “I hope the program continues beyond this school year.”

There was tremendous bipartisan support in the state legislature for the EpiPen bill. Thirty-five state House members and three state senators co-sponsored the bill.

At a hearing on the bill, teachers and others  testified in favor of the legislation  — although the Connecticut school health professionals  urged a delay until proper protocols for the administering of epinephrine by someone who is not a medical professional could be developed.

A mother from Westport whose son is allergic to peanuts also testified in favor of the bill. She said she was a  member of the Fairfield County chapter of FARE, or Food Allergy Research & Education, a group that says “it’s been proud to partner with Mylan on a wide-range of education and awareness initiatives.” Mylan calls FARE an “ally.”

Connecticut’s EpiPen law came too late to help win it preference in its last application for an asthma grant, which provides the state with $575,000 each year from 2014 to 2019.

But Christopher Stan, spokesman for Connecticut Department of Public Health, said the state will include the implantation of its new law in the “competitive” section of an application to renew the grant in 2019 to be able to “go to the head of the line.”