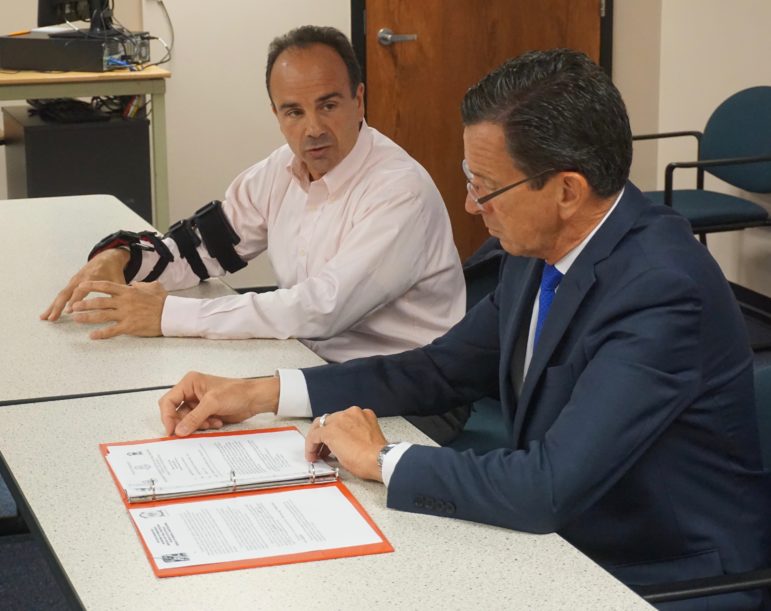 Gov. Dannel P. Malloy seemed to avoid the gaze of Mayor Joseph P. Ganim at Troop G in Bridgeport. Ganim’s arm was in a brace after surgery.

Bridgeport — The body language seemed strained while photographers were briefly allowed in a room crowded with local, state and federal law enforcement called to talk to about street shootings. Gov. Dannel P. Malloy sat next to Mayor Joseph P. Ganim, never quite making eye contact with the mayor whose election he once opposed as an embarrassment to Connecticut.

But the governor and mayor emerged together from a meeting that unexpectedly ran 90 minutes, morphing from a photo opportunity into an air-clearing session that produced promises of greater cooperation among agencies and help from the State Police and Department of Correction for a city reeling from street violence.

“This was not a meeting for the purpose of you guys taking a picture. This was real,” Malloy said. “Pertinent information was exchanged about individual cases, about ongoing investigations, about the roles the federal folks could play if they decided to, about the roles that we think is initially appropriate to undertake on the state side.”

Reporters were barred from most of Malloy’s meeting with Ganim and about two dozen law-enforcement officials, but participants described the governor as questioning Chief A.J. Perez about progress on the investigation of a shooting of 13 individuals at a party and challenging city officials to explain the failure to maintain police patrols in housing projects.

Ganim told the governor that the refusal of the Bridgeport Housing Authority to provide its share of promised funding for the patrols led to their discontinuance, an act that contributed to the city disbanding the authority’s board at the urging of federal housing officials, the sources said.

The meeting was perhaps the governor’s highest-profile visit to Bridgeport since the unlikely return to office last fall of Ganim, who was forced to resign in 2003 after a conviction on corruption charges that sent him to prison for more than seven years. The state’s  largest city was a crucial contributor to Malloy’s election in 2010 and re-election in 2014.

Malloy endorsed Mayor Bill Finch in the Democratic primary, then delivered a pointed disavowal of Ganim after he won the nomination. “I don’t think he‘s earned that endorsement, to tell you the truth,” Malloy said a year ago. “I think it’s a difficult situation that’s played itself out in Bridgeport, and an unfortunate one.”

But in the months since, the two men have talked, most recently at the Democratic National Convention in Philadelphia, where both were delegates committed to Hillary Clinton. Ganim briefly addressed the Connecticut delegates at breakfast one morning, introduced by U.S. Rep. John B. Larson as “the comeback kid.”

On Thursday, Malloy and Ganim sat at the head of two long tables lined by law enforcement officials, some of whom seemed ill-at-ease.

Connecticut’s steady drop in crime is a point of pride for Malloy, and the governor noted to participants and again to reporters that even the recent spate of shootings in Bridgeport comes in a year when the city, overall, is recording fewer homicides and other violent crimes. A fatal shooting last Saturday, which police attributed to drug deal gone bad, was the city’s sixth in 2016.

But Malloy said there is an outbreak of shootings, many in and around the housing projects that are home to 12,000 of this city’s 148,000 residents, and it must be confronted.

“We have identified additional federal and state assets that will be made available to Bridgeport in this particular time of need,” Malloy told reporters after the meeting, joined by Ganim, Perez, State Police Col. Alaric Fox and Correction Commissioner Scott Semple. 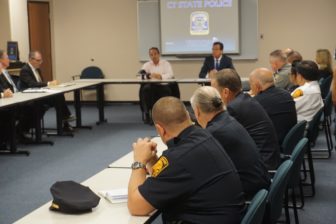 One of the goals will be to focus on pending arrest and fugitive warrants, pursuits that often can result in investigative leads and the seizure of illegal firearms. The state Judicial Department web site lists 4,331 pending arrest warrants in Bridgeport for probation violations, failure to appear in court or incarceration orders.

Malloy said the state will help attack the backlog, in part by authorizing overtime.

Project Longevity, a program that has produced daily meetings in New Haven to share information and target community outreach, has been less rigorous in Bridgeport, officials say. Local and federal players have agreed to step up the efforts here.

“I want to say the federal authorities have been very forthcoming,” Malloy said. “I think you’re going to see some changes, all of which we’re not going to detail in too great an extent. But I think people in Bridgeport will see some change very rapidly. Let me also say if you are one of these perpetrators, we’re after you. We’re coming for you.”

Malloy left for a briefing on the tropical storm that could reach Connecticut over the weekend. He extended his right hand to the mayor.

Ganim recoiled, but smiled. His right arm is immobilized by a brace after surgery on a bicep he ruptured playing basketball with his son. Malloy shook Ganim’s left hand, then departed for Hartford, leaving behind a smiling mayor. 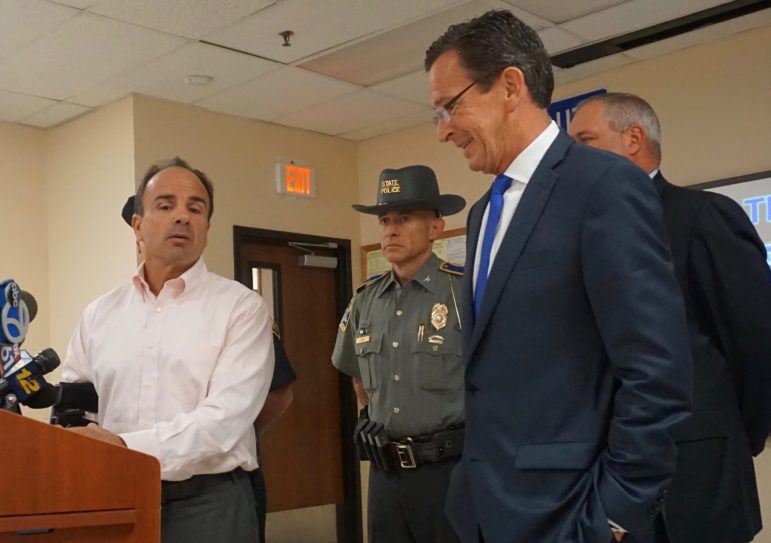 The mood was easier after the meeting as Ganim thanked Malloy. Behind them are Col. Alaric Fox and Commissioner Scott Semple.