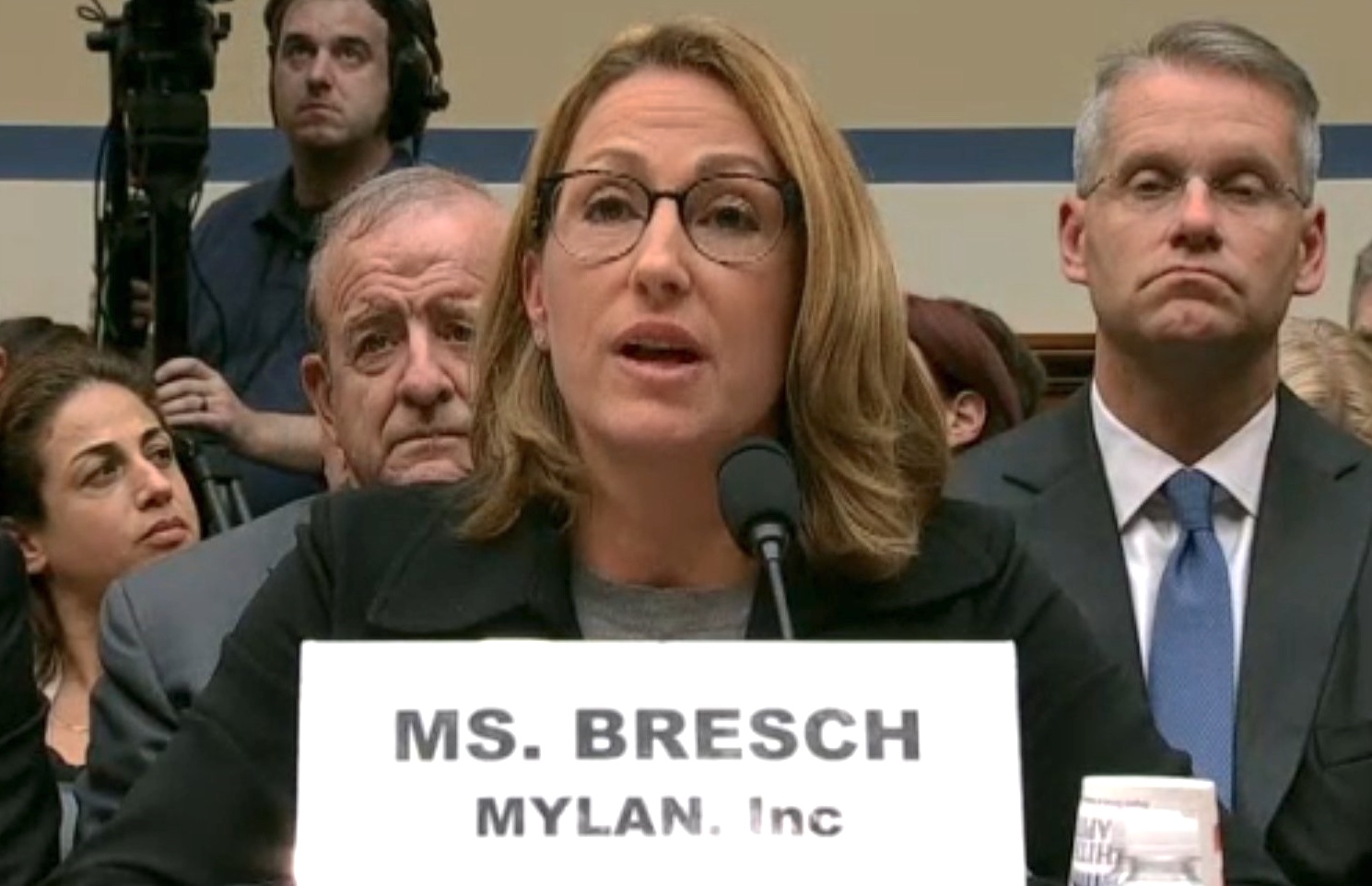 Washington – There was a bipartisan bashing of Mylan CEO Heather Bresch Wednesday over her company’s huge price increases on EpiPen, the auto-injector that delivers a drug that counters the effects of a potentially fatal allergic reaction.

But despite the tough grilling, questions remain as to whether individuals, and states like Connecticut that pay millions of dollars for EpiPens through Medicaid, are paying a fair price.

At Wednesday’s hearing of the House Oversight and Government Reform Committee, Chairman Jason Chaffetz, R-Utah, called EpiPen’s price hikes “extreme” and said Bresch’s testimony that Mylan makes only $50 in profit from each EpiPen is “hard to believe.”

He accused the company of using a “simple but corrupt business model” to enrich themselves in the same manner as Martin Shkreli of Turing and executives at Valeant Pharmaceuticals, who drew public criticism for huge price increases for drugs their companies made

The committee called Bresch to testify after the company raised the list price for a pair of EpiPens to $600 from the $100 a pair of the auto-injectors sold for in 2007, when Mylan acquired the product.

But after hours of grilling the CEO, lawmakers received little insight into Mylan’s pricing policy.

“I think now I understand why you make $18 million,” Rep. Blake Farenthold, R-Texas, told Bresch. “Figuring out the complexity of drug pricing has me really flummoxed.”

Bresch said “middlemen,” like  insurance companies and pharmacies, ate up most of the EpiPen’s profits, and Mylan received only $274 per twin pack. She also touted Mylan’s discounts to schools and to the uninsured and those with high deductibles. Bresch also boasted of Mylan’s decision to start marketing a generic EpiPen that would cost only $300.

She also told lawmakers that Mylan needed to raise the price of the EpiPen to increase spending on lobbying and public education campaigns to expand access to the lifesaving drug.

Bresch also said Mylan is working on extending the shelf life of EpiPens from 18 months to what it hopes will be 24 months.

Her testimony came a day after the attorney general of her home state of West Virginia said he is conducting a probe of whether Mylan engaged in fraud in the way it paid rebates on the devices to the state’s Medicaid program.

The EpiPen was designated a “non-innovator” drug – like generics – which allowed it under the Medicaid program to pay only a 13 percent rebate of the Average Manufacturer Price per unit. If EpiPens were considered an “innovator multiple source drug,” states like Connecticut would receive a rebate as high as  23.1 percent of the average manufacturer price.

The drug that the EpiPen delivers – epinephrine – is a generic, but the delivery device is protected by patent.

According to the Connecticut Department of Social Services, Connecticut paid $10.7 million to pharmacies under the Medicaid program in fiscal year 2016. But that cost, $609.82 per twin pack, did not include reimbursements by the federal government, which shares half the cost of the regular Medicaid program and pays 90 percent of the Medicaid expansion program created by the Affordable Care Act

The EpiPen cost to Connecticut did not include Mylan’s rebates, which David Dearborn, spokesman for the Connecticut Department of Social Services, said his agency could not provide.

Sen. Richard Blumenthal, D-Conn., is among several lawmakers who have asked the Department of Health and Human Services to investigate whether Mylan is paying enough in Medicaid rebates.

“The Minnesota Department of Human Services estimates this misclassification will result in the state overpaying an estimated $4.3 million this year alone,” Blumenthal and the other lawmakers wrote HHS earlier this month. “That figure is just for one state, for one year, for one drug. This misclassification is particularly costly for states like Minnesota, Connecticut and New York that have experienced record high Medicaid enrollment thanks to increased access to health care. In fact, last year, over 750,000 people in Connecticut – 20 percent of the population – were covered by Medicaid.”

Bresch is the daughter of a former West Virginia governor and current U.S. senator, Joe Manchin. She was also questioned about her mother Gayle’s use of her position as president of the National Association of State Boards of Education to promote the stocking of EpiPens in schools.

Gayle Manchin was at the forefront of a movement to require schools to purchase EpiPens in 2012. Eleven states , including Connecticut, passed laws requiring EpiPens to be available at all elementary and secondary schools and almost all of the remaining states strongly encouraged schools to keep the auto-injectors on hand in case of an emergency.

Food and Drug Administration official Doug Throckmorton also testified at Wednesday’s hearing about the federal government’s efforts to approve a lower-cost version to compete with the EpiPen.

He told frustrated lawmakers he could not divulge information about any drugs or medical devices that are in the pipeline for FDA approval, but said the agency is implementing a policy next month of approving –or rejecting – applications for approval within 10 months.