Malloy: Next budget will be very lean, without major tax hikes 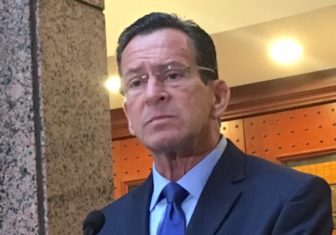 Despite debt costs that are surging at unprecedented rates, Gov. Dannel P. Malloy said Tuesday his proposal for the next state budget probably will not call for any major tax hikes.

With state finances currently on pace to run about $1.5 billion in deficit next fiscal year, Malloy’s plan is expected to recommend deep cuts to spending not fixed by contract.

The Democratic governor did not rule out small tax hikes, but also said he was considering tax incentives to spur business growth.

If you’re asking, ‘Am I leading with the expectation that we’re going to raise a lot of additional dollars, then the answer is ‘no,’” the governor said.

But he noted that, “There are tax changes that I’d like to see that are beneficial to the business climate of the state.”

Malloy, who spoke with Capitol reporters after a State Bond Commission meeting, warned that Connecticut faces “gigantic challenges” as it tries to compensate for surging debt costs — most caused by seven decades of inadequate saving for public-sector retirement benefits. And “it will require adjustments to be made in other parts of the budget.”

Reports detailing all of those surging debt costs — from the administration and from the legislature’s nonpartisan Office of Fiscal Analysis — are due to lawmakers by the close of business Tuesday.

The Mirror reported on one of those surging debt costs earlier this month. Connecticut’s contribution to the teachers’ pension system, which stands at just over $1 billion this fiscal year, must grow by 28 percent, or more than $282 million, next fiscal year. Roughly 70 percent of that cost involves catching up on contributions and investment earnings not made or achieved in the past.

Those surging debt costs, coupled with new projections showing revenues aren’t growing as quickly as state officials had hoped, are one of the major factors behind a projected hole in state finances of about 8 percent in the next fiscal year.

Malloy, who approved tax hikes worth more than $1.8 billion in 2011 and more than $650 million in 2015, said he believes his predecessors deserve most of the blame for those.

“Most people out there think I’ve increasing spending dramatically for what they otherwise would consider to be optional expenditures, and nothing could be further from the truth,” Malloy said.

“Over the course of my administration, we’ve had to pay the bills of other administrations, and that continues to drive our expenditures,” the governor said. “I don’t believe people understand that a lack of paying the bills as they should have been paid (in decades past) has led to the current difficulties the state of Connecticut is living with.”

Connecticut saved nothing between 1939 and 1981 for pensions promised to public school teachers. And even after it began saving for this benefit, the state did not regularly save the full amount necessary until 2008.

Similarly, state employees’ pensions were established in 1939 and nothing was saved until 1971. No significant savings effort began until the mid-1980s, and that was undercut by a deal with unions in 1995 that allowed Connecticut to defer significant funding. The state undid that deal and went back to full savings in the 2012-13 fiscal year.

And when it comes to retirement health care for state employees, Connecticut has saved less than 1 percent of the funds it needs to cover about $20 billion in long-term obligations. Current employees contribute about 3 percent of their pay toward retirement health care, but this covers only a portion of the long-term cost, meaning Connecticut still is promising some benefits for which it is not fully saving.

“I get it; I ran for this office,” he added. “It would have been great fun to be governor and not have to pay the bills, and I know other governors enjoyed that.”

Malloy, who first proposed in November 2014 that Connecticut try to restructure its payment schedule into the state employees pension fund, said Tuesday that it must be resolved in the coming year.

The administration estimated that the annual contribution to the state employees pension fund, which currently tops $1.5 billion, could spike to more than $6.6 billion by the mid-2030s. After that, though, the annual payment would drop drastically to about $300 million.

But Malloy and others argue no state budget can afford the quadrupling of this one line item over the next two decades.

The governor’s staff is in talks with state employee unions to see if Connecticut can defer a portion of those payments. This would reduce the spike somewhat, but also would mean the state would have to make larger payments in the late 2030s and into the 2040s.

Restructuring also would increase the overall cost to the state, since it would leave less pension contributions available for investment over the next two decades.