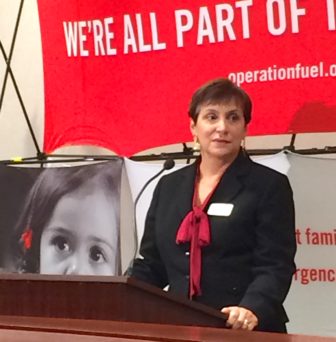 According to Operation Fuel, the energy affordability gap — the difference between the bills low-income households face and the level they can afford — dropped from $1,506 last year to $1,241 in the latest report.

“Even though energy prices were lower this past year, there still is a significant gap between what lower-income households pay for energy bills and what they actually can afford to pay,” said Karen E. Adamson, executive director of Operation Fuel. “And when low-income households do pay their bills in full and on time, it is frequently at the expense of other basic necessities such as nutritious food, health care and education.”

Connecticut’s only nonprofit emergency energy assistance program that offers assistance year round, Operation Fuel provided nearly $3.2 million in aid to 7,705 households over the past fiscal year.

Rep. Lonnie Reed: “A program that we really believe in.”

“As a result of this mismatch between energy bills and the resources needed to pay them, low-income households incur unpaid bills and experience the termination of service associated with those arrears,” he said.

Rep. Lonnie Reed, D-Branford, co-chair of the legislature’s Energy and Technology Committee, urged residents to contribute to Operation Fuel, either by contributing on their utility bill or by visiting operationfuel.org.

“This is a program that we really believe in,” Reed said, adding that Operation Fuel’s energy assistance particularly is effective in reaching people who may not be aware of, or qualify for, other forms of assistance. “It impacts your friends and neighbors, people in every community,” she said.