Malloy goes to DMV for some good news, seriously 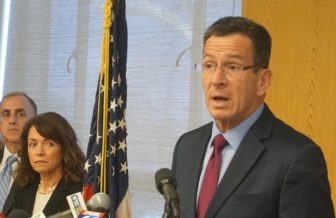 Gov. Dannel P. Malloy with Judeen Wrinn and other staff.

Wethersfield — He doesn’t deliver his State of the State address until next week, but Gov. Dannel P. Malloy proclaimed Wednesday that the state of the much-maligned Department of Motor Vehicles is, well, better.

In fact, it’s 55 percent better, as measured by average wait times that have dropped from 77 minutes to 34 minutes since the DMV improved customer service and streamlined procedures over the summer, the work of a new management team that took over in January, Malloy said.

The improvements came without increasing staff, he said.

Judeen Wrinn, a retired corporate executive with experience as a customer-service troubleshooter, was hired as the deputy to Commissioner Michael Bzdyra and given one task — pinpoint why the lines had grown so long, aside from bugs in a new computer system.

What worked in the private sector was transferrable to the public sector, she said, standing with Malloy, Bzdyra and other DMV staff.

Wrinn said the DMV studied 500 customer interactions and identified points where the system failed, then gave the data to front-line employees and coached them to design changes.

“That’s the same as the private sector,” Wrinn said. “The more you involve the people who are actually doing the work and you listen to the customers, the more you are going to make it better. But we really relied on data.”

Customer advocates now circulate through lines, checking to see that customers have all the document necessary to complete transactions. DMV offices open 15 minutes early, allowing documents to be checked before the windows open for business.

Wrinn said changes were tested at the main headquarters in Wethersfield and at a busy branch office in Enfield, then implemented at all 12 offices.

A new telephone system is going in next year, and more business is going on line. When a new license renewal system is activated, motorists will have the visit the DMV just once every 12 years for renewals.

The new computer system, which triggered so many of the delays, has largely been debugged, Malloy said.

“That’s a work in progress,” he said, “but the amount of progress that’s been made is quite remarkable.”

Malloy’s visit to the DMV came exactly one week before he is to deliver his State of the State to the General Assembly on the opening day of the 2017 legislative session on Jan. 4.

His speech is like the DMV — a work in progress.