For more than two decades, most of the new trails built in the state were almost entirely the work of local volunteers who had to overcome indifference, if not obstruction, on the part of the State Department of Transportation. In the past five years, Malloy and his transportation commissioner, James Redeker, have turned that narrative on its head. The state is now including non-motorized trails in its planning efforts and making major investments in them. As a result, more are getting built.

“Malloy gets it,” said Bruce Donald, one of the state’s leading trails advocates, who heads the Connecticut Greenways Council and also serves as Tri-State Coordinator (CT, NY and NJ) for the East Coast Greenway Alliance. “We are in a different place than we were five years ago.”

Related links
With cash for bike trails, new era begins at ConnDOT
The Evolution of Connecticut’s Approach to Regional Trails 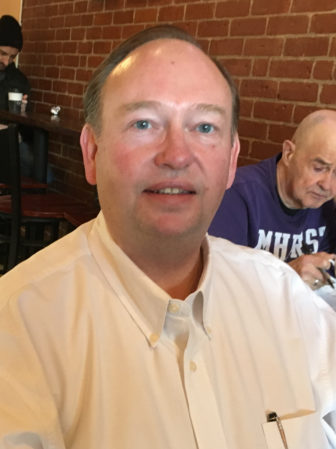 Thousands of bicyclists, walkers, joggers, cross-country skiers and Rollerbladers, along with business owners along the trails, couldn’t be happier. They are seeing progress on, among others:

There are a bunch of others in the pipeline, from the Moosup Valley State Park Trail in Eastern Connecticut, which connects the towns of Sterling and Plainfield to the Trestle Trail in Rhode Island; to the Norwalk River Valley Trail that when completed will wend for 38 miles along the state’s western border, connecting Norwalk, Wilton, Ridgefield, Redding and Danbury.

Because the trails were built in local increments, rather than as a mini-statewide highway system, there are gaps. The plan now, on which the state and the advocates are of one mind, is to close the gaps so, as Donald put it, “the trails go where people want to go.”

The vision, Donald said, is to have a main “spine” trail, Connecticut’s 200-mile section of the East Coast Greenway, running through the state, from the existing systems in the east through Hartford, south on the Farmington Canal trail to the New Haven area and then west to New York, temporarily along the shoreline with the hope that a permanent 37.5 mile trail in the Merritt Parkway corridor will anchor the western part of the greenway. 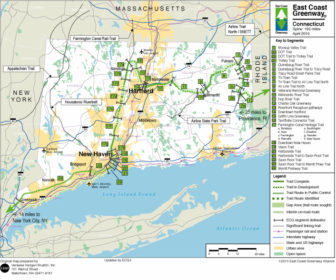 Other major trails, such as the Naugatuck and Housatonic valley trails, would become the “ribs,” connecting to the spine. If all went well, these would continually be expanded, and more on-road bike lanes created, so more and more people can safely get to the trails from their homes.

There are, as might be suspected, fiscal and political challenges in achieving this vision. But as Donald said, the momentum is growing.

Trails have been part of Connecticut’s landscape since animals first roamed the woods. Wildlife trails became native American trails, which sometimes became roads or hiking trails. Leaping millennia ahead, the state Department of Energy and Environmental Protection has built trails in state parks for many years. Since 1929 the nonprofit Connecticut Forest & Park Association has, among other duties, maintained what is now the 825-mile Blue-Blazed hiking trail system.

But the growth of paved, multi-use, non-motorized trails can be traced to a number of events beginning in the 1980s and early 1990s, including:

These steps and others got the trail movement rolling, but it took years to get it into second gear. 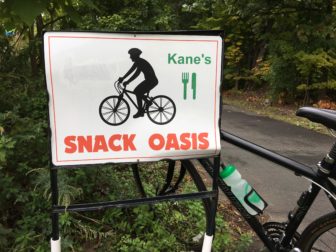 A little advertising in Simsbury on the Farmington Canal Trail.

As advocates soon found, the availability of funds didn’t immediately translate into more trails. For one thing, the initial funding formula was 80 percent federal and 20 percent local — no state money — which inevitably favored wealthier towns that could come up with the 20 percent. State officials ameliorated this problem by allowing local in-kind services to count toward a town’s contribution, among other measures.

Also, the grant money was for construction only, which forced towns to scramble to find money to design the trail projects. There was sometimes opposition from adjoining property owners. And all the while, there was very little enthusiasm in the DOT to build trails. “They wouldn’t even tell you what the process was,” Donald recalled.

Building one small section at a time meant the process moved slowly. For example, it has taken more than twice as long to build the Farmington Canal trail than it took to dig the canal itself with shovels in 1825-35.

Nonetheless, local groups kept pushing, and getting sections of trail completed. In what was no surprise to people watching the rail-trail movement around the country, the trails were hugely popular.

Multi-use trails were the first new large-scale recreational amenity in the state in decades, and people voted with their feet. As each increment was completed — in many cases before they were finished — droves of walkers and bikers took to them. 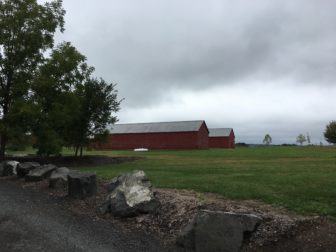 Now, the trail is completed through the town. Real estate ads promote properties as being near or on the trail. A couple of stores advertise on the trail, the town has a bike share program and groups of bicyclists check into local hotels to ride the trail (groups sometimes led by ebullient volunteer Steve Mitchell, a prominent car dealer). In 2014 it became the first town in the state awarded the Silver Level Bicycle Friendly Community designation by the League of American Bicyclists.

In early 2012 the DOT got onboard in a big way, establishing a goal of developing “a more robust and complete multi-use trail network to complement the vehicular roadway system in Connecticut.” Since then the department has committed $10-$20 million a year in state and federal funds to trails, with a focus on the major state and regional trails.

Is the investment worth it?

As Donald and others see it, trail investment offers a major and multi-level bang for the buck, with benefits that include:

Glassman, the former first selectman, thinks we’re at the start of a movement, an age of “active transportation,” in which — as in many other countries around the world — many people use bicycles for transportation as well as recreation, and cities are designed for safe walking and biking. 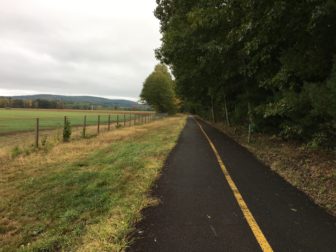 There are a couple of hurdles to overcome before that day fully dawns. Money will continue to be an issue. One funding source, the Department of Energy and Environmental Protection’s Recreational Trails program, had a $5 million bond allocation canceled last summer, which advocates are trying to recover or replace with federal funds to provide feasibility, design and initial engineering work. This program focuses on smaller trails; if the funding isn’t replaced the burden of finishing them could fall on towns, regions or private sources.

But the main funding source, $10-$20 million a year in state and federal monies coming through DOT for the major trails, is holding steady.

Also, said Tom Maziarz, DOT’s bureau chief for policy and planning, his trail builders are learning to “stretch the dollars” by working in partnership with DEEP and local officials and advocates.

In urban areas where trails are heavily used, the surfaces are paved, at a cost of about $1 million per mile. In more rural areas, builders use stone dust, because the cost of construction and maintenance is about a fourth that of the paved trails, Donald said.

Although trails have become widely popular in much of the state, there are still pockets of resistance, notably along the Merritt Parkway. The proposed multi-use trail in the parkway’s 300-foot wide right of way had hit opposition in several communities from adjoining property owners.

An organization called the Merritt Parkway Conservancy has opposed the trail, primarily, its website suggests, because of the environmental factors related to removing trees from the 14-foot wide trail right-of-way.

There also is support for the trail. Donald hopes that a test section under consideration in Stamford and new trails being built across the state line in New York, such as the Hutchinson River Greenway, will build popular support and thus political will to build the Merritt Parkway trail. He thinks the Merritt trail may ultimately have a sawtooth shape, with legs connecting to the parkway towns.

Also, if there’s to be a broader network of bike trails, including on-road lanes, the state dearly needs to ramp up its efforts to educate the public about bike and pedestrian safety, said Laurie Giannotti, DEEP’s Trails and Greenways coordinator. Where streets are wide enough, many advocates would like to see protected bike lanes, such as those between curbs and rows of parked cars, as can be found in Europe and a growing number of American cities. 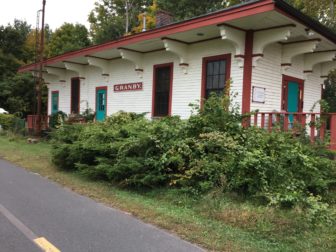 Glassman said political leadership often follows public demand, and the numbers strongly suggest the public wants Connecticut to be a bikeable state. In 2015, electronic counters on the Farmington Canal trail counted 622,868 passersby, not far from the 700,000 who used the Allegheny Passage trail that year.

Also, cities including Hartford and New Britain have adopted “complete streets” ordinances, a policy to make streets safe and friendly for all users, not just automobile drivers. Hartford Mayor Luke Bronin said his administration “is putting a lot of effort into this,” saying it will make the city healthier and better connected, internally among neighborhoods and externally to suburban communities.

Bicyclists and walkers have an advocacy group, Bike Walk Connecticut, that pushes for funding, better laws and educational programs.

There were two statewide conferences on trails this fall, one sponsored by the Governor’s Greenway Council and a second by the Connecticut chapter of the American Society of Landscape Architects, which drew more than 80 people to the Lyceum in Hartford. Jeff Mills, the chapter’s executive director, said with “enormous renewed interest” in outdoor activity, trail and greenway projects are an area of great interest to landscape architects.

“Local groups are still pushing, advocacy continues to grow,” said Donald. “I have a remarkably good feeling about where Connecticut is headed on bike/ped activity.”