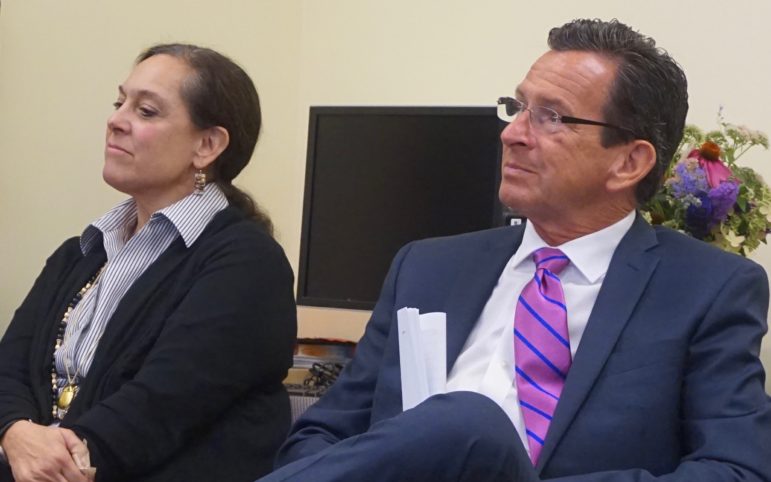 Legislators are growing increasingly concerned with Gov. Dannel P. Malloy’s push to lock in an $800 million budget for the state agency responsible for the care of thousands of abused and neglected children – while he promises to slash spending elsewhere.

The Department of Children and Families has been under court oversight for more than two decades as the result of a federal lawsuit, and the Democratic governor is pushing acceptance of a plan to overhaul what the state agency is required to do before it can exit court supervision. The plan would require reducing caseloads for social workers, increasing spending by $6.4 million for mental health and substance-abuse programs, and shielding DCF from budget cuts as long as the agency is under court oversight.

In return, the agreement would end court oversight of areas the state has proven are no longer systemic problems at the agency. Those areas include searching for children’s relatives and placing siblings together as much as possible when they are removed from their home.

The state House of Representatives and Senate have until Feb. 3 to vote by a three-fifths majority to reject the agreement, which has been approved by the Connecticut attorney general, a U.S. district judge and the plaintiffs in the lawsuit that led to the court oversight. If the legislature does not vote to reject the deal before Feb. 3, it goes into effect.

Sen. Len Fasano, the Republican leader of the state Senate, said he intends to force legislators to vote on the issue when they convene, which is likely to be on Feb. 1.

“It’s not about us wanting to make cuts, it’s about making investments that count,” Fasano said during an interview. 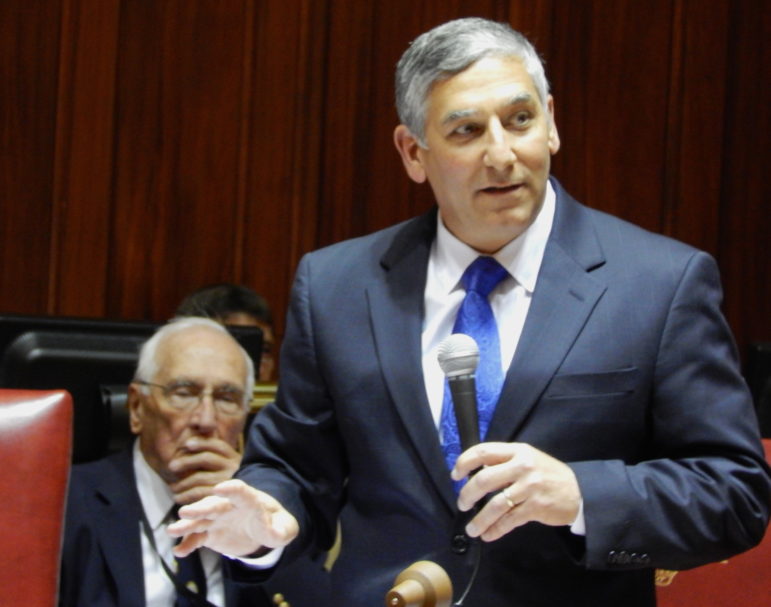 Fasano – one of the most vocal critics of DCF Commissioner Joette Katz’s policies – is concerned the agreement would rob the legislature of its ability to make necessary reforms or divert money away from failing programs or approaches. He is also concerned because the agreement requires funding specific private programs and agencies that provide services to youths under DCF supervision.

In the last 13 months, the state’s Office of the Child Advocate, an independent watchdog, has released two reports criticizing DCF for what it termed systemic issues with the vast agency’s oversight of children removed from their families. (Read more here and here)

In the most recent report, the child advocate documented a case in which DCF staff dismissed the pleas of a foster parent who repeatedly reached out for help; failed to notice months of malnourishment and the near-starvation of baby “Dylan;” and didn’t identify a troubling criminal and substance-abuse history in the home where he was placed.

In the earlier case police were called because a 2-year-old under DCF supervision was found wandering in the snow in a diaper and tee-shirt. DCF had received several phone calls, including one from a police officer, warning that the child’s mother was unfit, but the agency had continued to rate the case as low risk.

“What Commissioner [Joette] Katz wants to do is to be the arbitrator solely of what programs work,” Fasano said. “We are the policy makers.”

Rep. Toni Walker, D-New Haven, the House chairwoman of the legislature’s powerful budget-writing committee, said that, “Several of my colleagues are concerned about the open-ended funding” and turning an $800 million budget into a fixed cost.

“That makes a lot of my colleagues very uncomfortable,” she said.

The legislature’s non-partisan fiscal experts report that about $10 billion of the state’s current $18 billion budget is already fixed and is largely immune from cuts when deficits arise.

In the fiscal year that begins July 1, the state is facing $1.5 billion in red ink, and the governor has said he wants the state to rely heavily on funding cuts to close that shortfall.

“We can’t continue to provide everything we have in the past,” Malloy told reporters last week. “I am not leading with taxes” to close the gap.

For Walker, this push to close the shortfall with cuts while taking an $800 million chunk of the budget off the table is problematic. “You are going to have to take it out of other areas,” said Walker.

But those who are involved with the agency have complained for years that it is woefully underfunded.

“Improvements are consistently undermined by insufficient staffing, which translates into an overwhelming workload issue. There also continues to be insufficient community resources to address the needs of children and families,” Raymond Mancuso, the federal court monitor, wrote in his most recent quarterly review of the agency.

He’s been warning about underfunding for years.

While DCF’s budget has been cut in recent years, legislators have somewhat spared the agency from the deep cuts imposed on others. During Malloy’s first year in office in 2011, the agency’s budget was $808.3 million. This fiscal year, the agency is on pace to receive $794.2 million, a 1.7 percent reduction.

While the budget has been spared big cuts, the cost of employing staff has risen steadily, which has reduced the number of employees at the department and increased caseloads for existing staff.

Walker said many people in her caucus are having a hard time getting past Katz’s promise to free the state of court oversight within a year of taking office and regularly blunting budget cuts in the hope of better outcomes.

“We want to look at how we evaluate this agency,” she said. “We have put more money in, and we still haven’t met the court monitor’s consent decree… If we sign off on this agreement, are they just going to be back at it again and say they need more money again next year.”

Asked if she thinks children are now better off than they were a few years ago, Walker said she is unsure.

In the court monitor’s reports he has regularly praised reforms the commissioner has made, including moving children living out of state back home and placing more children with family members. But he also has said the state still falls short in its efforts to connect children to mental health, housing and other services they require, either because of long wait times for services or social workers with untenable case loads.

Chris McClure, a spokesman for the governor’s budget office, said it is important that the legislature let the agreement move forward.

“The administration is committed to the funding requirements in the agreement so that Connecticut can move forward after 25 years of being under federal monitor. It is truly a credit to Commissioner Katz and her staff that they have been able to make such significant progress in the delivery of services to the vulnerable population they serve, and it is incumbent upon the administration and the General Assembly to meet the funding requirements – even in this environment – so we can continue the progress this state is making to resolve the mistakes of the past,” he said. 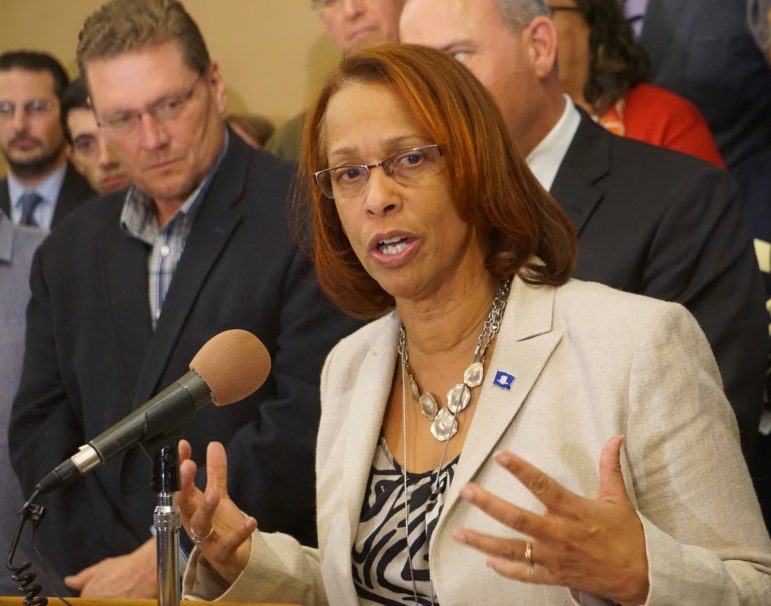 There are some supporters of the plan, including Rep. Diana Urban, D-Stonington, the co-chair of the legislature’s Committee on Children.

“If we can pass this and go forward, it takes a huge weight off of DCF’s shoulders, off of my shoulders, to know that we have made these investments and that we are able to respond successfully,” she said. “DCF has taken hits on the budget, and has still managed to make things happen.”

Many though haven’t decided, even as the Feb. 1 vote in the Senate looms.

“I am on the fence right now,” Sen. Cathy Osten, D-Sprague, co-chair of the powerful Appropriations Committee, said during an interview after meeting with Katz. “We have to make sure we are making a decision that does not overly tie our hands on the budget-making process. But at the same time, I would like to see us remove the cost of the court oversight.”