In East Haven, a split on what kind of change Trump will bring 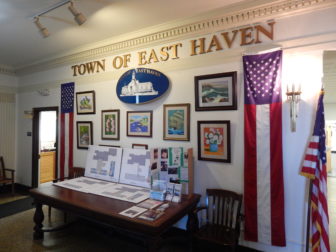 First in a series of visits to Connecticut towns leading up to the inauguration.

East Haven — As President-elect Donald J. Trump prepares to be sworn in Friday, a middle-aged woman who cast her first presidential ballot for Trump is ready to celebrate him as the new Ronald Reagan. An unemployed landscaper just hopes Trump can bring him a job.

Like Reagan, the billionaire celebrity reached working-class voters who had been voting Democratic, when they voted at all. In New Haven’s eastern and northern suburbs, Trump greatly improved on Mitt Romney’s performance against President Barack Obama. East Haven, North Haven, North Branford and Wallingford all went Republican after voting for Obama in 2012.

“[He] sounds a lot like Reagan,” Suzanne Arnone, a nursing assistant, said outside a Dunkin’ Donuts. “We haven’t had a fine president since Reagan.”

Reagan carried Connecticut in a landslide in 1984, the last time the GOP won control of the General Assembly. Clinton won the state, as has every Democratic presidential nominee since her husband in 1992, but she was rejected by the blue-collar suburbs outside New Haven.

With the exception of Wallingford, which is more affluent, these towns all have median household incomes just below the state average of $66,000. All are predominantly white, and all saw significantly higher voter turnout in 2016, contributing to Trump’s gains.

Arnone never voted before Nov. 8, despite being eligible to do so for nearly 40 years. Trump convinced her that he represents a change not only from the past eight years, but from the past three decades.

Arnone said she expects Trump to work to improve services for veterans and the disabled while strengthening the nation’s military over the next four years – or more. She grinned and said, “Hopefully eight.”

Trump promised job growth for Americans, and Arnone expects him to deliver.

“All the foreigners that don’t belong here, that are taking the American jobs from us Americans – if they want to be here legally, take the test,” Arnone said.

Other East Haven residents shared similar sentiments, perhaps influenced by neighboring New Haven’s reputation as a city that welcomes legal immigrants and is protective of the undocumented.

East Haven has struggled to overcome a reputation for racial intolerance by its police department. Of the towns along the Quinnipiac River that voted for Trump, East Haven has the highest Hispanic or Latino population at 10.3 percent.

Lonny Thompson, an East Haven construction worker, said he has realistic expectations for what Trump might accomplish on immigration and border security.

“He’s not gonna build a wall. He’s not gonna ship everybody out,” Thompson said. “You can’t just ship people out of a country. I like the idea if you’re caught breaking the law, you’re shipped back. I like that. But if you’re here and you’re under the radar, no harm, no foul.”

Thompson didn’t vote in November. He said if he had, it would have been for Trump. He could see why his neighbors turned out in large numbers for a candidate who boasts of being tougher, smarter, better, richer. 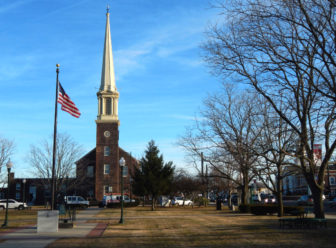 The Old Stone Church stands over the East Haven town green on a windy weekday in January.

Thompson said many working-class residents who turned to Trump are struggling, overtaxed and hungry for a measure of relief.

“The working man takes a beating,” Thompson said. “People could live off of what I pay in taxes, and I’m not a high-paid guy.”

Others expect more than relief. Alex Chudyi, an East Haven resident originally from Wallingford, is counting on Trump’s administration to create new jobs. Chudyi is currently unemployed after losing his job as a landscaper and construction worker.

The start of Trump’s presidency gives him hope for finding a job again, he said, because of his belief that Trump has the capability of following through on his promises.

“I like how he’s strong-willed in a way,” Chudyi said. “It just seems like if he says he’s going to do something, if it’s possible to do it, I think he’s actually going to stick to it and do it. Hillary, I felt like, wouldn’t do anything. She would back down like Obama did all the time.”

Hillary Clinton’s voters here doubt Trump’s ability to deliver change – or question whether his changes would help or harm.

Dianne Shute, a postal worker from East Haven who voted for Clinton, said she is hopeful and fearful about the next four years. “Hopeful he’s a completely different person than what’s normally going into the presidency,” Shute said. “Fearful because of what he talks about.”

Despite that fear, Shute said, she does not expect much to change over the next four years – “just like the last eight years,” she said.

Adrienne Kanach, a retired high school science teacher from Branford, is equally doubtful about how much Trump can accomplish, but said she is “extremely fearful” nonetheless. She said Trump’s administration is bound to suffer from a “crisis in IQ.”

“I have been through many presidential elections in my lifetime, and even when my party didn’t win, I was never fearful because the candidate had competency,” Kanach said. “I don’t feel Trump has competency. He doesn’t have good judgment. He doesn’t have mental stability.”

Kanach is most concerned about the effect of Trump’s presidency on the environment. While maintaining social programs and working toward strengthening the economy are important goals, she said, environmentally sound policy is most important in the long run.

“I don’t place as much emphasis on— people say, ‘economy.’ What does that mean?” Kanach said. “I think coal miners in West Virginia thought they were going to be rich because Trump got in. The economy’s important, but I think we have to sacrifice economy for the environment.”

Kanach said credit for any achievements by the Trump administration over the next four years will go to cabinet members.

Susan Lynn, a massage therapist from East Haven who voted for Trump, said she sees an opportunity for change, but acknowledges it would be easier to accomplish if Americans were united. Lynn said she hopes Americans will “join together” over the next four years and “be more patriotic.”

She is optimistic that Trump will work to unite people, an endeavor where, Lynn said, Obama failed.

“I think that America is pretty divided right now,” Lynn said. “If the Democrats and the Republicans show that they can get along, maybe the rest of America can follow suit.”

Read about our visits to Darien, Ansonia, Avon and Voluntown.