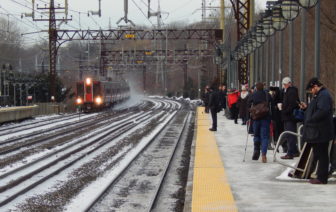 A northbound Metro North train pulls into the Darien train station as commuters wait for the next train to Grand Central Terminal on the southbound platform.

The second in a series of visits to Connecticut towns leading up to the inauguration.

Darien — The markets are up, and that is a comfort here in the ninth-wealthiest community in the U.S., one of the usually reliable Republican towns in lower Fairfield County that chose Hillary Clinton over Donald J. Trump.

Some, even a few who didn’t vote for Trump, say they already are seeing a positive effect of his election on the nation’s economy. Ben Brightwell, a Darien lawyer, is one of the those people. While waiting in line at a Dunkin’ Donuts in town last week, he said he finds himself equal parts hopeful and fearful of a Trump presidency.

“Obviously, the market’s done well,” he said. “I’m hoping that we kind of stay on the upswing, but I’m scared, too.”

Brightwell is one of many Darien residents who have cast ballots for Republican candidates in past elections but could not vote for Trump last year. He wrote in Evan McMullin, an independent presidential candidate from Utah who ran as a conservative alternative to Trump.

And five other traditionally Republican towns in lower Fairfield County – all predominantly white and affluent – joined Darien in voting for Clinton.

Many residents spoke favorably of the New York businessman-turned-politician and the coming Trump presidency, while others have their lingering doubts. Most notably, no Darien voters who cast a ballot for Romney in 2012 and Clinton in 2016 would agree to go on the record when interviewed. 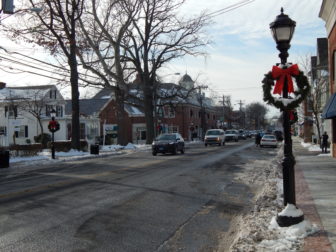 Downtown Darien is relatively quiet during normal working hours, as many residents commute to New York or one of its satellite cities.

Many cited fear of backlash from their employers, who supported Trump. Some also said they were concealing their votes from family members.

One man, who asked not to be identified, said he felt “resigned” to whatever happens over the next four years, which was a sentiment expressed by many others who wished to remain anonymous.

But for as many residents in the region who are waiting to see what Trump can accomplish before passing judgment, he has a large number of enthusiasts who believe the inauguration cannot come soon enough.

Lori Raymond, a resident of the Rowayton section of Norwalk who visited the Darien Public Library with her daughter, said she is excited about the next four years and expects greater transparency from a Trump administration. She also said she hopes the country can better its relations with Russia, a goal which she said people should not fear.

As for what Trump could do to improve his chances of implementing significant policy changes, she said, there is one glaringly obvious fix that he could make.

“I wish he’d get off Twitter, because I think it gets him in trouble,” Raymond said. “I sometimes want to cover my eyes and my ears, because I do back him, but I don’t like his retaliation.”

Her advice to Trump? “Be bigger than that,” she said.

Elizabeth Lazzara, a Darien resident who splits her time living in Connecticut with a second home she has in Florida, said Trump’s pragmatism will grow the economy and protect the country from terrorism. 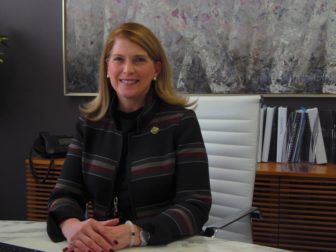 “I feel very optimistic about it,” Lazzara said.

That optimism is shared by the town’s top official, Jayme Stevenson, a Republican who serves as first selectman. She plans to attend Trump’s inauguration on Friday.

“I would like to say that I probably had all the same concerns as the folks in Darien who ended up not voting for Donald Trump, if they’re Republicans or unaffiliateds who might have voted for Hillary Clinton,” Stevenson said. “As a person, I had some concerns about how he conducted himself through the election.”

Not all voters in the region are able to find hope in the Trump presidency, however.

Karen Cummins, who lives in Darien and works in New York as a senior vice president at TV Land, was brief and to the point when she said she remains fearful.

“I am very concerned where the country is going to go under his presidency,” she said as she boarded a Metro North train bound for Grand Central Terminal.

Jean Krasno, a Ridgefield resident and City College of New York political science professor who commutes out of Darien regularly, said she plans to participate in a major protest planned for the day after the inauguration in Washington, D.C.

“I think that he got elected under false pretenses,” Krasno said as she stood on the train station platform. “People thought that he was going to provide jobs for them.” 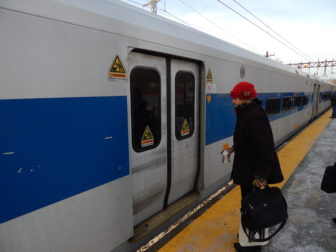 Jean Krasno, a Ridgefield resident and City College of New York political science professor, waits to board her train at the Darien station.

Krasno said Trump is planning to implement an agenda that promotes “racism, sexism and xenophobia” while withdrawing us from major climate change agreements, all of which she said runs counter to the values of the country.

Not everyone has reached a conclusion on the Trump presidency one way or another. Some have adopted a wait-and-see attitude, like Joe Coldebella, an IT consultant from Norwalk.

Coldebella said he left his ballot blank at the top, and faulted himself and the rest of the country for allowing the two major parties to nominate the candidates they did.

“We, as a country, did a horrible job,” Coldebella said.

When asked what he hopes the Trump administration might accomplish, Coldebella said he didn’t know – in part because, he said, Trump’s campaign lacked a solid agenda for governing once elected.

Stevenson said she wishes more people would adopt a wait-and-see attitude and give Trump the chance to govern before reaching a verdict on his presidency.

“I didn’t vote for President Obama, but I gave him a chance,” Stevenson said.

Read about our visits to East Haven, Ansonia, Avon and Voluntown.