In Ansonia, a shift toward Trump as new symbol of hope 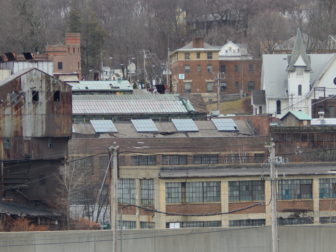 An abandoned factory in Ansonia sits on the bank of the Naugatuck River with houses perched on the hillside above it.

The third in a series of visits to Connecticut towns leading up to the inauguration.

ANSONIA — Donald J. Trump’s message of a strong defense and economic growth resonates in the Naugatuck Valley, a region that’s never recovered from the disappearance of brass mills and other heavy industry. That message turned Nick Amico into a Trump supporter after backing Barack Obama just four years ago.

“I voted for him twice, and I’m a Democrat,” said Amico, an Ansonia resident. “The first four years, I felt good. I thought we were moving in the right direction. Almost overnight after the election to his second term, I saw a change.”

That change, an almost amorphous concept some residents discussed, was seen by many in Ansonia, a predominantly white community that has grown more diverse over the past two decades as the Hispanic and Latino population has increased. Nearly one-in-five families live in poverty, with the median household income at an anemic $43,000, well below the state average of $66,000.

It was no coincidence Trump held two of his three campaign rallies in Waterbury and Bridgeport during Connecticut’s Republican primary last April. And it was equally non-coincidental that it proved to be one of Trump’s strongest regions in November, an area that a half-century ago political journalist Theodore H. White described as “the seedbed of Yankee ingenuity.”

Now the Route 8 corridor between Waterbury and Bridgeport is littered with dormant smokestacks and empty warehouses – relics from a bygone era.

Trump scored a narrow victory in Ansonia with 48 percent of the vote – an astonishing feat considering that Obama won 61 percent there four years earlier. Throughout the rest of the Naugatuck Valley, Trump’s vote percentages were in the high 50s and even low 60s.

Amico was one of thousands of voters who played a part in that shift when he cast his vote for Trump last November.

“I just think it’s time for a change,” Amico said.

Amico worked for 32 years before retiring from his job at Stratford-based Sikorsky, a leading helicopter manufacturer owned by defense contractor Lockheed Martin. He voted for Trump in large part because he expects major changes to national defense policy over the next four years, including significantly higher spending on the defense budget. 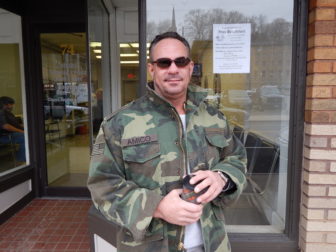 He said he expects Trump to send some of those federal dollars to Connecticut-based companies like Sikorsky.

Foreign policy also played a role in Amico’s decision. One of the areas where he became most dissatisfied with Obama during his second term – part of the “change” he witnessed – was the United States’ relationship with Israel.

Other residents echoed Amico’s sentiments on increasing the strength of the military and restoring the United States’ relationships with foreign allies.

Dolores Wisniewski, a Beacon Falls resident, was adamant in her belief that Trump should increase the size of the military in the coming years. But that’s only one of many challenges the country has to face in the coming years, she said, while out shopping in Ansonia with her granddaughter, Camryn.

When asked what makes her hopeful about Trump’s ability to accomplish some of his major proposals, Wisniewski’s answer was simple.

“Well, he said he was going to do it,” Wisniewski said. “I believed him. I voted for him.”

Wisniewski’s granddaughter is equally enthusiastic. Camryn, a Thomaston resident who is 17, said she “loves” Trump and contrasted his proposals with those of Bernie Sanders.

Some are optimistic he can accomplish those goals. Steve Kelly, a Naugatuck resident, is one of them.

“I think in this case, where he has both the House and Senate, that I’m hopeful that maybe he can get something done and not go through all the fighting and bickering that’s been going on between the Democrats and Republicans,” Kelly said.

Kelly, who works as a sales consultant for a professional beauty distributor, said health care and education should be top priorities for Trump.

He said that a full repeal of Obamacare is “not necessarily” a solution, though he did not rule it out. Instead, he believes in finding a system that works for everybody, regardless of whether that involves keeping all or part of Obamacare intact.

Kelly said he also would like to see Trump make college education more affordable, if not free altogether, even though he would not be a beneficiary of the initiative.

“If he gets through that, if he wants to pay for what I still have bills for, that’s good, too,” he said, chuckling.

Kelly also said he hopes Trump’s relationship with Russia will help to ease tensions with the United States, though he remains more skeptical about that. 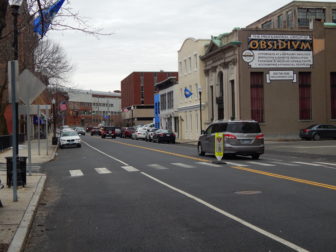 Downtown Ansonia on a cloudy weekday in January

Social issues also played a role for at least a few Naugatuck Valley residents in this election. Jennifer Walker, a self-described conservative Catholic from Derby, said she has found herself “at ease” since November because Trump won.

“I’m pro-life, so that’s very important to me,” Walker said. “I’m also against gay marriage. That’s also important to me. And just keeping God in the school systems is another component I hope he kind of works towards.”

“I like what his daughter is doing with allowing women to have more time off with their children,” she added.

Walker said she wants to see Trump work to promote more unity over the next four years, “opening up doors to work together and have more of a community.”

Trump wasn’t without his critics in the region, yet even they conceded that some of his proposals might work. Thomas Pike, an unemployed Ansonia resident who voted for Clinton, said he fears what might happen to him if federal funding to certain programs is cut off.

“I feel bad, because I’m one of the people on government assistance,” Pike said. “If you take that away, where am I going to live? Yeah, I’m a convinced felon for things that I have done in my past, but I’m trying to get myself together. Now you’re telling me that I’m not supposed to try to better myself with the government assistance that was made for us to get on, get help and get off?”

Despite his concerns, Pike admitted that he thinks Trump could be successful in shrinking the national debt. He also said he could see why Trump would propose building a wall if it could be shown that it would reduce the flow of illegal substances into the country.

But that is as much as Pike is willing to concede. He said the blame for whatever happens over the next four years falls on Republicans for nominating him in the first place.

“It seems like they fell for his BS,” Pike said. “You’re trying to make America right again? Who said it’s wrong?”

Read about our visits to East Haven, Darien, Avon and Voluntown.