In Voluntown, anticipation of job growth over next four years 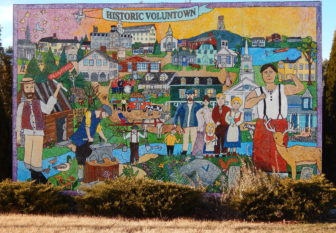 The fifth and final in a series of visits to Connecticut towns leading up to the inauguration.

Voluntown — When President-elect Donald J. Trump stands in front of the U.S. Capitol at noon today to take the oath of office, Diana Kowalsky will be in front of her television.

“I’m off Friday,” Kowalsky said earlier this week. “I took [the day] off for the inauguration. We’re going to celebrate.”

Kowalsky, a Griswold resident, is among those eastern Connecticut voters who turned out in droves to support Trump in November.

More than 20 towns east of the Connecticut River that favored President Barack Obama four years ago flipped to Trump in 2016. These sparsely populated communities, all predominantly white with median household incomes ranging from a low in the $50,000s to a high in the $70,000s, are nestled between idyllic lakes and quiet state forests. Many are along the Connecticut Turnpike’s I-395 corridor.

Trump made dramatic inroads in the region, winning Windham County and falling a little more than 8,000 votes short in New London County. Several towns flipped from decisive Obama victories four years ago to narrow Trump pick-ups in 2016. Others, like Voluntown and Griswold, were narrower Obama victories that turned into Trump landslides.

Kowalsky’s enthusiasm for Trump dates back decades, she said, in part because she spent the first 23 years of her life in a place where she became quite familiar with the Trump brand.

“I grew up in New Jersey, and I used to go to his casino,” she said.

After spending the first 23 years of her life there, Kowalsky moved to Connecticut. She has lived here for 25 years now and works in the cavernous bingo hall at Foxwoods Resort Casino in Ledyard.

For all her life, she said, she has had to work hard. Under Trump’s leadership, she wants others to be doing the same.

“My father owned his own business and told his kids, ‘Work. Pay for what you want. Do good in your life, and you’ll keep going,’” Kowalsky said. “I’m almost 50 and I taught my kid who’s 22 the the same way.”

“We need to all start working, and get our country working again,” Kowalsky said. 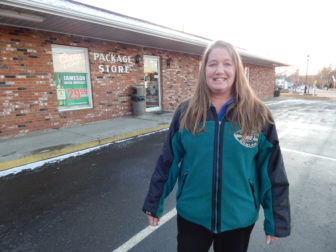 Diana Kowalsky, a Griswold resident, is taking the day off to watch Trump’s inauguration.

But to Kowalsky, a Trump presidency means more than just a certain set of values. It’s about his honesty with the American people.

“I like the fact that he shoots from the hip,” Kowalsky said. “He tells you like it is. It’s not sugar-coated. This is how it is in the world.”

For Jody Grenier, who has been chief of the Voluntown Volunteer Fire Department for 25 years, Trump’s straight-talk about China is what resonates.

“I know he talks about China all the time, but it’s so damn true,” Grenier said. “When you look at the history of this town and most of your towns around, it was full of textiles and mills and everything else. They’re all gone.”

Grenier said he hopes Trump “breathes some life” into manufacturing and creates jobs. If Trump makes progress on both of those fronts, he said, “everything else will come with it.”

“I’ve just sat there and watched everything go into decline,” Grenier said. “I raised my family in this town. I’ve been here 57 years. I’ve bought three pieces of property that I’ve fixed up – couldn’t do a thing with them. Everything is just in the tank.”

Securing the border and strengthening the military should also be top priorities, Grenier said. He has two daughters who serve in the military, which he said factored into his vote for Trump.

“I think we give away so much to so many people” that there’s little incentive left for a lot of folks who don’t work or don’t want to work, Grenier said.

Erin Pelletier, a stay-at-home mom from Voluntown, said she is closely watching what Trump will do to bring jobs back to the United States, including whether he offers tax breaks to entice companies to stay or return.

“Ford did just bring a bunch of jobs back, so I’m hoping that other companies are going to follow suit and bring our economy up,” Pelletier said.

She also said she wants to see how Trump plans to replace Obamacare after it is repealed.

Bob Sajkowicz, a Griswold resident who works for the town’s public works department, said he doesn’t know if Trump can accomplish everything he has promised, but, he said, Trump is saying what people want to hear, including about creating jobs. 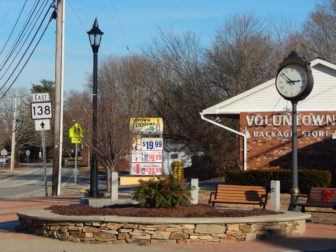 “We need American-made,” Sajkowicz said. “We need jobs here. It starts with jobs in our country – us first, not everybody else.”

Creating new jobs is also a high priority for Wyatt Giroux, a Voluntown resident who plans to go into law enforcement after finishing school. But his top priority is for Trump to roll back gun restrictions, he said.

Giroux said he hopes Trump’s determination will result in change.

“I feel like the country’s in fear,” Giroux said. “Everybody’s so worried about everything. I feel like we finally have somebody who’s straight to the point.”

But not everyone is as hopeful about the next four years. While some in the region voted for Hillary Clinton, a few others chose third-party options. Eastern Connecticut proved to be one of the strongest regions in the country for the Green Party nominee, Jill Stein, though her vote percentages still sat in the low single digits.

Roy Wood, an electrician from Sterling, was one of those Stein voters. He said he expects “more of the same” for the country.

“It would be nice if he could make some improvements in jobs and payscale and stuff, but I really don’t see him doing much that’s going to help the average person,” Wood said. “I’m kind of afraid he’s going to help the rich get richer and the poor are going to stay poor.”

When asked why he voted for Stein, his answer was simple: “Bernie Sanders wasn’t on there.”

Michael McInnis, a subway car repairman from Plainfield, said he would have voted for Sanders, too. Instead, he voted for Stein.

“I think he’s unstable,” McInnis said. “I don’t like the people he surrounds himself with.”

But, despite that, McInnis does not plan to spend the next four years rooting against Trump.

“I don’t have a crystal ball, but my hope is that he gets re-elected, and that I’m wrong about him completely, and that everybody thinks, ‘Gee, this guy has worked out great,’” McInnis said. “I have to be hopeful like that.”

Read about our visits to East Haven, Darien, Ansonia and Avon.